Surveillance cameras have traditionally all required home run cabling, with each connected to a dedicated network switch or DVR port.

Now, Vivotek has added PoE extension to select cameras (aka, daisy chaining) with the aim of reducing cabling, infrastructure, and overall cost.

The question is: Do these cameras make sense in the field? In this note we break down the capabilities of this new line, features, pricing, potential applications where it may make sense, and potential future impact.

What differentiates these models from standard cameras is a second Ethernet connector providing PoE out (seen below, in yellow). Installers connect the next camera in a chain from this output to the next input, up to 100m. Currently, three models of PoE extender cameras are available, all outdoor rated bullet cameras with built-in IR, in 720p (IB8338-HR) and 1080p (IB8367-R/IB8367-RT). 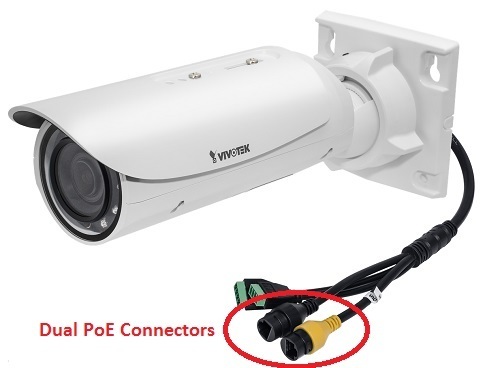 PoE may be extended to two additional cameras (a total of three).

When using standard 802.3at (30W) switches, only one additional camera may be added. For full PoE extension to two additional cameras, users must use UPoE switches or injectors. UPoE is a non-standard variant of PoE created by Cisco which uses all four pairs of the cable to deliver up to 60W. Vivotek offers their own models of UPoE switches, but any switch supporting Cisco UPoE may be used.

Note that this PoE extension does not allow users to transmit further than the 100m standard max distance per segment, as some products do (see the Veracity LongSpan). It simply allows an additional standard length segment to be added.

Since the camera's PoE output supports standard 802.3af/at, any PoE camera may be used as the last device in the chain. However, the first and middle devices must be Vivotek PoE extender cameras.

Estimated street price of the IB8367-R and -RT is about $500 and $550, respectively. This is about average for 1080p integrated IR bullets. This pricing is about a $50 premium over Vivotek's models without PoE extension (IB8367, no -R), making this capability a relatively low cost add-on.

There are several applications where these cameras with built in PoE extenders may simplify installation:

In applications where fiber may be eliminated, substantial savings may be seen using PoE extender cameras. 2-strand fiber cable is typically twice the price of Cat5e/6 (~$0.50 per foot vs. $0.25), and a homerun to each camera, increasing cable price to about $900 vs. $225 using PoE extension. Additionally, media converters are required at either end of the fiber run ($200-300 per pair), and requiree power at the camera location, which may add substantial cost if a parking lot light pole does not have always-on power. All in all, PoE extender cameras may reduce costs by about $1,000-1,500 in these instances, or more if power must be installed.

By contrast, in indoor locations where cables are easily accessible, savings is much smaller. Daisy chaining these cameras likely only saves $100-300, the cost of additional Cat5e/6 runs.

Overall, Vivotek's PoE extender cameras are a niche. In some applications (above), users may find them useful compared to running multiple cables, converting to fiber, or adding switches for more PoE ports. Allowing the last camera to be any PoE camera certainly helps.

However, in everyday applications, most will likely find standard homerun cabling and typical Ethernet switches preferable, instead of being locked into a non-standard cabling scheme with few camera options available.

Vivotek is the most well known manufacturer to offer daisy chaining, but there are at least 3 other companies offering a similar approach: