Continuing our panoramic camera shootout series, this report shares our findings from testing the Vivotek 5MP 360 vandal dome camera, the FE8172V. The report contrasts Vivotek's performance to Axis, Mobotix and Panasonic panoramic cameras, featuring a series of image comparisons, like so:

These are the key findings from our test of the FE8172V:

The FE8172V offers superior WDR and low light performance compared to other panoramic cameras, though full light image quality lags somewhat. If these conditions are key factors in the intended scene, Vivotek is a strong choice.

In this video we review the physical construction of the FE8172V. Key highlights include:

In this video we review configuration and operation of the FE8172V in third-party VMS systems:

These comparisons show Vivotek versus a selection of competitors from our panoramic camera shootout, at varying light levels.

In full light, ~6' range, the FE8172V lags somewhat behind the top performers in our test. Details of the subject are slightly reduced, and the chart is fully legible only to line 3, while others may discern line 4, as well.

At 18', performance evens out somewhat, as details delivered by all cameras are reduced.

At close range, relative performance is similar to our full light scene, with Vivotek slightly less clear than competitors.

At 18' range, almost no details of the subject or chart are clear. This is similar to the Axis M3007 and Panasonic SF438. Mobotix outperforms others, despite the higher level of visible noise.

At close range, the FE8172V is one of few cameras to show the test chart at all. Others, such as Mobotix and Panasonic are completely dark. Note that Vivotek produces no details whatsoever, though, providing detection of the chart only. Beyond this range, the chart and subject were not visible.

In the darker area next to the door, performance among cameras was more even, with Mobotix slightly edging out others. 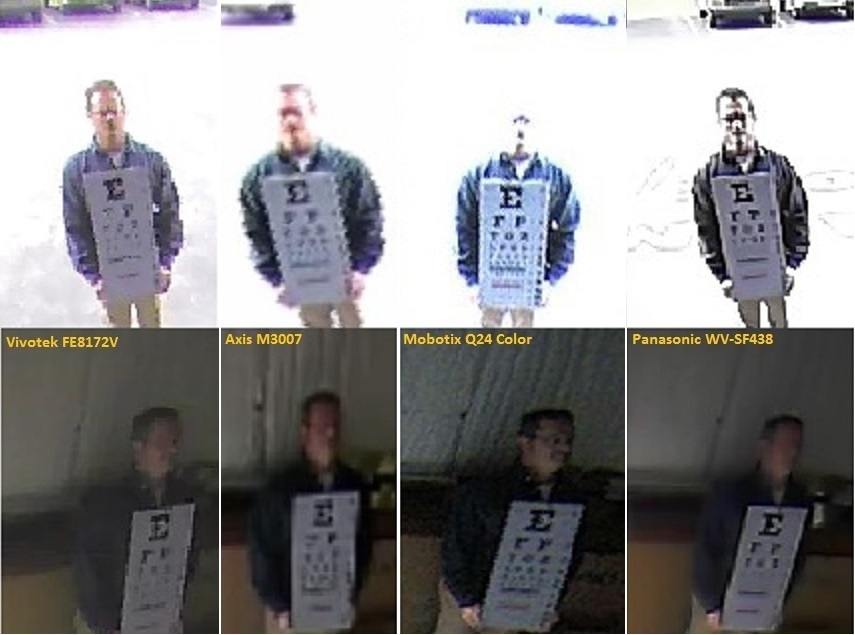