One of the downsides has been the addition of a 'head' or 'base' unit to do the encoding, often large or cumbersome enough to create installation challenges.

We bought a new Vivotek 'lipstick bullet (the IB8168C), shown below, to see how it performs against other compact cameras.

For well lit (>2 lux) indoor areas where such a form factor is a key concern, the ~$170 Vivotek IB8168 1080p camera may be a strong choice. However, if low light is a key concern, integrated IR bullets are a better choice at a similar price point.

The most notable feature of the IB8168 is its compact size, seen below compared to a Dahua integrated IR bullet, about twice the diameter. 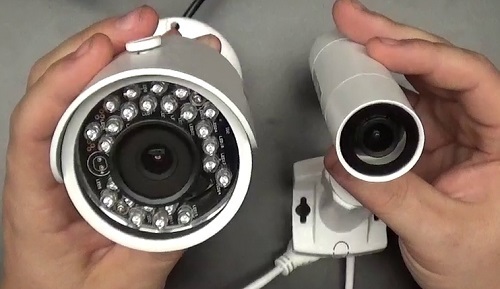 In the video below we cover this and other notable points:

The web interface of the IB8168 is similar to other Vivotek models, with nothing new of note. This video reviews key settings: 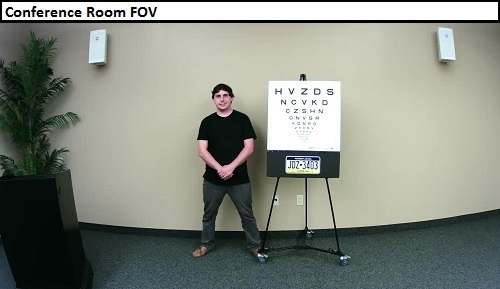 In full light, the IB8168 our subject is well lit, with minimal artifacts visible.

In a low light ~2 lux scene, the Vivotek IB8168 has the most digital noise of cameras in this test, reducing visible details in our subject's face slightly compared to other cameras. However, the chart is legible to line 6, similar to the Axis M3005 and Dahua HFW3200S.

At less than 1 lux, the IB8168 is unable to produce a usable image, as is the Axis M3005. The Dahua and Hikvision cameras benefit from their built in IR.

We set the cameras up in an open office to show the differences in FOV and resulting PPF due to the cameras' differing fixed focal length lenses. Below are the fields of view for the three bullet cameras used for testing.

As our subject comes around the corner from ~15' away from the cameras, our subject is well lit, and all cameras are able to distinguish some details of our subject, such as clothing and build.

The Vivotek IB8168 has the lowest bandwidth consumption of the cameras tested in low light, as well as the second lowest bitrate in full light, only .03 Mb/s higher than the Axis M3005 on average.

Cameras were tested using default settings with shutter speed standardized to 1/30s max, and frame rate set to 10 with quantization ~28-29.

Firmware versions of these cameras were used for testing: