Panoramic cameras are overwhelmingly quite bad in low light.

Now, manufacturers are starting to add IR to them. We tested the Hikvision panoramic IR earlier this year.

Now, Vivotek has released the FE8181, which claims improvements such as more LEDs and Smart IR.

Here is a snapshot from our tests showing the unit in day and night operation: 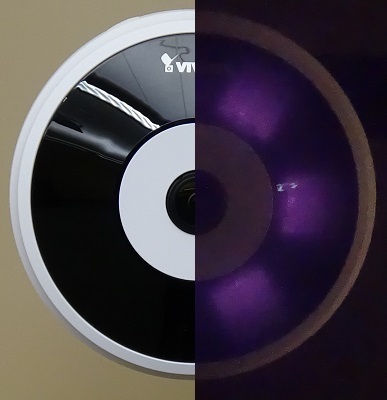 The FE8181 has an estimated street price of about $600 USD. This is similar to the Hikvision DS-2CD6362, a competitive indoor IR panoramic model.

The FE8181 provides better low light performance than other panoramic cameras we have tested, including IR panoramics, and is recommended if low light is a priority. Further, it uses client side dewarping, which many may prefer to the camera side dewarping of Hikvision's IR panoramic line, as it requires only one stream to be sent and recorded, with the ability to dewarp archived video. Camera side dewarping requires multiple streams to be recorded if overview and view areas are all desired.

In this video we review the physical construction of the FE8181. Notably, the IR LEDs are located in the dome's cover, with contacts making the connection to the camera's base.

These LEDs can be seen turned on in night mode here: 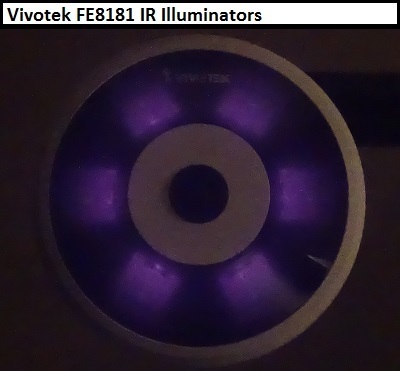 The web interface of the FE8181 is substantially unchanged from previous panoramic models, such as the FE8172V, with only a single new option (to turn built in IR illumination on in night mode). As such, we've included the web interface overview from that camera here:

The FE8181 includes smart IR which automatically dims as subjects approach the camera, reducing or preventing overexposure, an issue in Hikvision's IR panoramic cameras. This can be seen in the following video:

With lights off, below 1 lux, both the Vivotek FE8181 and Hikvision DS-2CD6362 IR cameras drastically outperform the Axis M3007 and Vivotek FE8172. The FE8181 does not overexpose our subject or chart at this range as the 6362 does, providing better details. 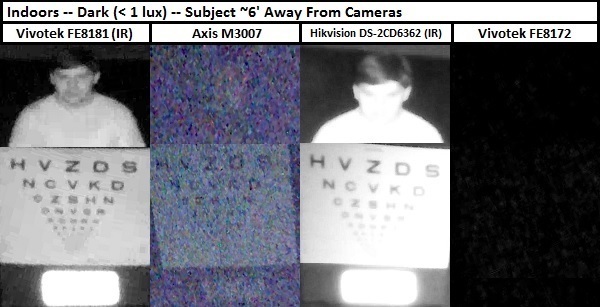 At ~12' in the dark, both the FE8181 and 6362 produce clearly visible images of our test subject and chart. However, little detail can be seen, with only his hair and a few characters on line 1 of the chart recognizable. 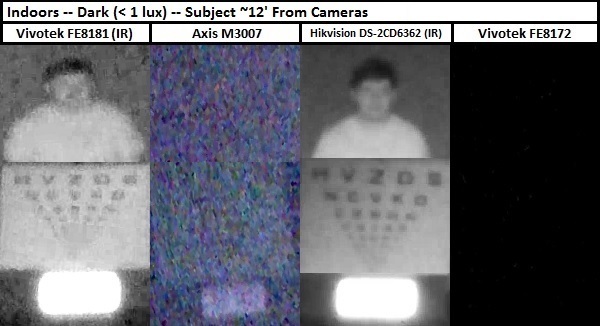 At ~18', our subject remains visible in the FE8181, though the Hikvision 6362 is less noisy, with better detection.

In full light, at close range (~6'), the Vivotek FE8181 provided a clear image of our subject and test chart, as do other cameras tested. 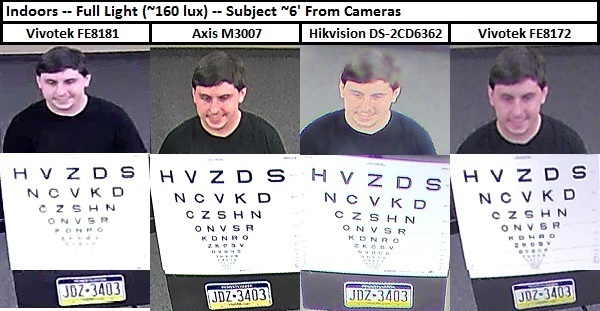 As our subject moves further away (~12'), the FE8181 makes our subject appear squatter than the other cameras, reducing details. Notably, this issue is not present when using the FE8172, Vivotek's older 5MP panoramic. 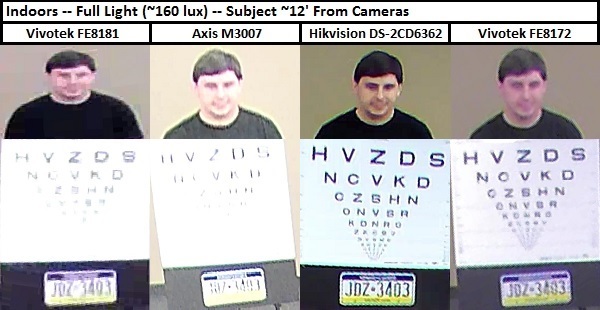 Finally, at ~18', the distorted dewarping of the FE8181 is most evident. Because of this, cameras such as the older FE8172 and Hikvision 6362 provide better details of both subject and chart.

All cameras were tested at default settings, except for exposure, which was standardized to 1/30s maximum. Firmware versions used"