Relic, Eye Candy, or Critical? All three labels may describe surveillance videowalls - vast arrays of monitors used to display hundreds of camera outputs and other security information. They provide an efficient way to display video for large groups of people. However, the numbers of end users adopting traditional video walls is shrinking. Are they finding smarter ways to display video, or are they giving up a critical tool? In this note, we take a look at videowalls and find out.

The design of videowalls changed significantly when cameras moved to IP from analog. In the analog heyday of videowalls, the sheer amount of videowall hardware was staggering - matrix switches, loop output pickups, controller cards, and joysticks were all necessary - even before considering the CRT displays. Analog videowall systems were big efforts in manually integration, where dipswitch configuration and jumper blocks took the place of 'modern' software based systems.

Controllers: These server-like boxes contain the hardware/software used to drive video to display monitors. Unlike earlier generations of equipment composed of hundreds of different devices, switches, and power supplies, a 'modern' video wall system looks much like a VMS installation. However, rather than accepting inputs from many cameras, a digital video wall delivers outputs to many displays. The backside of a controller closely resembles a server - containing ethernet ports, serial connectors, and many video output ports:

Supported Inputs: Videowall Controllers accept inputs from a broad variety of devices and systems, including:

Controller Performance: Like a VMS server, a videowall controller is sized based on video throughput. Final configuration of a videowall system depends on the type and number of streams to be displayed. In general, controller hardware aims to display megapixel resolutions at full frame rates with no artifacts or quality loss. For a large bank of display monitors, the performance of a purpose built videowall controller exceeds a handful of workstation computers dedicated for the same purpose.

Displays: While using standard consumer-grade HDTVs is common for videowalls, videowall manufacturers recommend using purpose-built displays. In addition to having a thin bezel (or frame), the display components are designed with a higher MTBF than standard consumer displays. Videowalls are designed to operate 24/7/365 without experiencing burn-in or losing color fidelity. The image below shows a videowall display panel - note the display glass extends to the edge of the panel, allowing for an uninterrupted picture to span more than one panel: 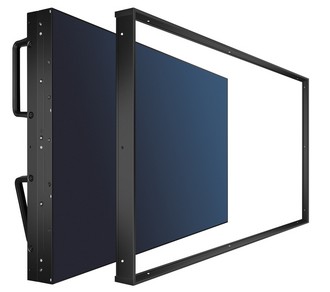 Since many do not need display walls to span across panels, users frequently forego purchasing a specific subsystem, and use VMS software [link no longer available] and aftermarket video cards to display outputs on multiple monitors.

A VMS-based videowall may not have the deep configuration features of a traditional videowall, but the core and most critical functions are present. Especially with maps becoming a prevalent feature within VMSes, and added integration of companion security systems (access control, fire/burglar alarms), the ability to organize the information within a single interface over a modest number of screens is 'good enough' for many users: However, VMS based solutions cannot always replace traditional systems. Especially when non-standard video inputs need to be displayed, when the video wall is larger than a few panels, or if hundreds of cameras need to be displayed at once, then a traditional video wall system is required simply based on the limited resources of workstation hardware.

Because a traditional videowall represents more hardware, special displays, and specialty configuration labor, it is several times more costly than using a VMS based solution with consumer displays.

The effect of VMS based solutions is so pronounced on the video wall business, few traditional manufacturers claim surveillance as a core market. This impact has been catalyzed with the transition of video surveillance displays from CRT TV-style monitors to large consumer-grade display panels. Even when traditional videowalls provide a better performing result, the willingness to purchase extra equipment is low, and many opt for a less expensive VMS based solution.

Aside from the changes in how videowalls are designed, their usefulness for modern surveillance has been questioned. Unlike analog systems that do not take advantage of networked workstations, it no longer is cost prohibitive to bring video directly to an operator's desk. Being able to stream video from multiple cameras to several users at once is neither difficult nor expensive with a networked video system.

In our informal LinkedIn poll, a majority of responses [link no longer available] describe that videowalls are 'seldom' to 'never' part of their system designs, and several end users admit the main benefit to having a videowall is that 'it looks cool' and 'makes the shareholders happy during walk-through', but having the system may not enhance overall security effectiveness.

Videowalls continue to have strong demand in specialized applications, including public safety, transportation, casinos, and law enforcement/military applications. In general, these applications are large scale and represent big projects built to support many operators.

In general, using a prebuilt videowall controller will cost $10,000 - $15,000 more than building your own out of a workstation and aftermarket videocards. Additionally, thin bezel videowall display panels will cost 30% to 100% more than equivalent consumer-grade displays.

Considering that the total videowall price represents the salary of several full-time guards, unless a security operation considers communal visibility of video critical to monitoring and response, the added cost of a videowall may have a hard time being justified.