In this report, we organize and share annual revenue of 25 leading video surveillance companies. Revenue numbers are often useful for businesspeople and investors to better understand size and relative power of players in a market. That noted, this list should NOT be used for buying decisions or evaluating technology as a weak relationship exists between revenue and product quality.

Inside, the PRO section, we itemize the annual revenue of the following 25 companies. The links for the companies in the list below go to our most recent analysis of their company's financial performance:

To maximize accuracy, we only listed revenue for companies whose revenue has been been audited and/or validated by government regulations. Often, analysts state company revenue based on rumors or what the manufacturer tells them their revenue is without any external validation. This approach has a high degree of error.

While revenue can be segmented in numerous ways, here are a some rules of thumbs that can help you estimate and categorize companies:

WARNING: Do not use the tables below to rank or rate manufacturers. Revenue gives a rough sense of how big companies are but it is a terrible way to judge if one company is 'better' than another. If you want to know who's 'better', read our Buyer's Guide or the VMS and IP camera favorite reports.

The table below is sorted by revenue in descending order. All numbers are approximations and for the most recent 12 month period revenue was disclosed. 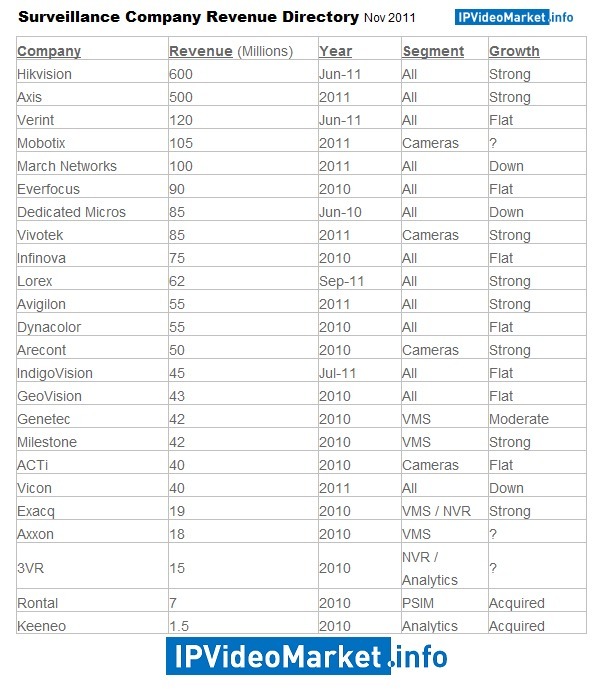 In this grouping, Hikvision is the company that might be the biggest surprise and in greatest need of clarification. While their revenue is very high, recent Hikvision financial reports reveal that 82% of their revenue is from inside of China. Hikvision's international sales are about $120 Million - roughly the size of Verint.

The second table below is for companies that offer video surveillance but do not break down their video surveillance specific revenues. While their revenue cannot be compared to the table above, it's useful to get a rough sense of their overall size in the market.

A few points on these companies:

A number of the biggest global surveillance providers are not cited here, including Bosch, Honeywell, Panasonic, Pelco and Sony. We estimate that all of these companies have surveillance specific revenue in the $250 Million to $750 Million range, meaning that they are much bigger than all the companies on the list save for Axis and HikVision.

Because this list is derived from publicly disclosed financial records or audited results submitted to 3rd parties, it is skewed to larger, more mature companies. The bulk of the surveillance industry including niche players not mentioned in this list typically generate between $5 to $15 Million in annual revenue. We estimate about 2/3rds of all surveillance companies not listed in the tables above generate between $5 and $15 Million in annual revenues.

From scanning these tables, it is clear that most of the largest companies sell a broad range of products including cameras and recorders. It is not a coincident that most specialists companies cannot break $100 Million in revenue.

All 3 downward trending companies, that is companies whose revenue is declining by more than 10% per year are traditional analog/CCTV companies. Of the 3, Dedicated Micros and Vicon have been on a continuous downward path for years while March Networks recently experienced a sharp negative drop.

Two IP companies deserve special mention of relative poor performance - ACTi and IndigoVision. While their revenue has been essentially flat over the last year, as specialists in IP only, this far lags the segment norm of 20-30% growth.

This list continues quite a number of strong growth companies which we define as companies generating 25% or higher revenue. However, this should not meant draw a conclusion that the market overall is growing strongly. On the contrary, there are a number of fast growing IP centric companies - Arecont, Avigilon, Axis, Exacq, Milestone, Vivotek etc. who are clearly taking market share from traditional CCTV incumbents. Now, in 2011, the combination of their increasingly large size (beyond Axis's ~$500 Million, the other 5 companies now combine for ~$250 Million revenue) and their continued sharp growth rate is resulting in a transfer of power from CCTV incumbents to IP specialists.

While industry luminaries love to talk about the power of acquisitions and the continuous impending consolidation within the industry, these numbers show the reality is the opposite. The market is actually fragmenting even further as IP specialists companies come of age as powerful forces in their own right. The companies that have been acquired in the past few years tend to be companies that struggled to make it on their own - Advasense, Intellivid, ioimage, Keeno, Orsus, Rontal, Vidient, etc. GE Security is huge and did change hands but GE Security lacks innovation in surveillance so it's basically shuffling deck chairs on the Titanic.

It will be interesting to see if the fast growing younger companies eventually get acquired but many of them have already IPO'ed (Avigilon, Axis, Hikvision Mobotix, Vivotek, etc.) so the motivation to sell to Honeywell, Bosch, etc. is much lower. We believe that most acquisitions will continue to be of second tier companies that do not have better options for an exit for their investors.

Manufacturer Revenue / Financials Directory 2016 on Jun 05, 2017
This report contains data on the revenue of 32 security manufacturers, trend...
Comments : Subscribers only. Login. or Join.