Verkada's false claims continue, this time to be the first native cloud-based access and video solution. 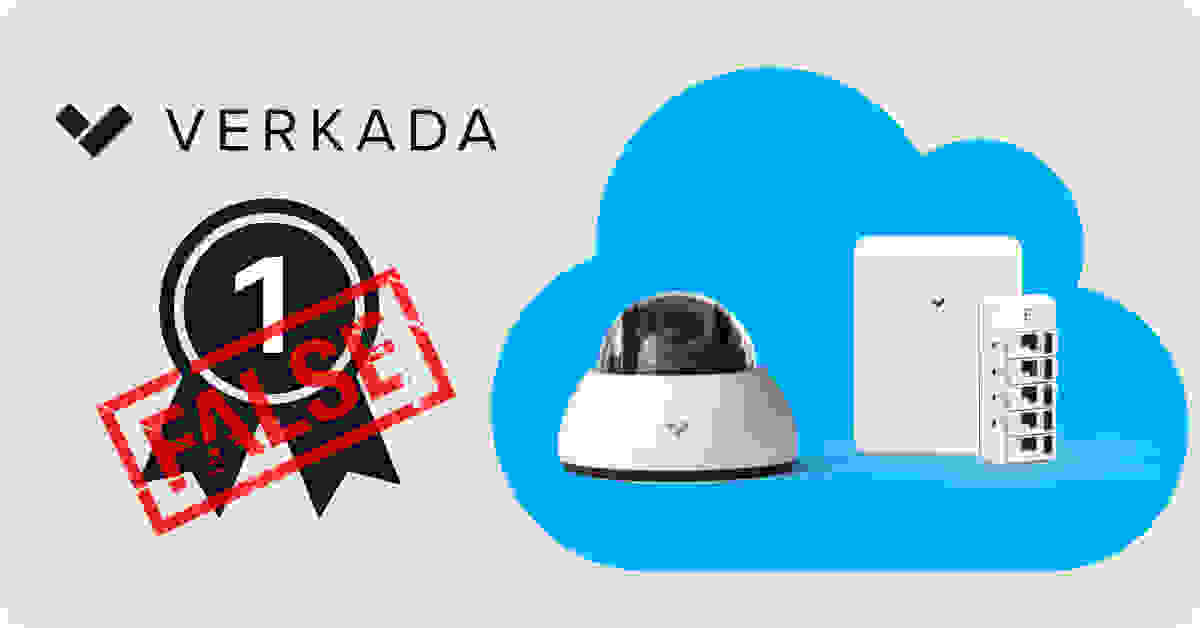 There are a number of manufacturers that already offer native cloud-based access control and video systems, so why make this claim?

Verkada has a history of repeatedly making false claims, about competitors and its performance:

In this report, we examine Verkada's claim here, provide feedback from Verkada, review funding to develop an access system, and challenges and opportunities for Verkada selling access.

Verkada's false claim is based on providing a "unified management platform" for video and access control in the cloud:

When asked about the false "industry's first" claim, Verkada said they believe other systems rely on 3rd party video integrations:

We believe that we are the first native, cloud-based integrated access control and video security solution. Other cloud-based providers do not have a native native video integration - they rely on third party integrations, even if those are now under the same brand. Most often, they deliver cloud-based Access Control and leverage other vendors to deliver camera integration and video management. Verkada provides a single secure platform, with a unified web interface that allows IT, facility and security professionals to manage, monitor and audit their access control and video security.

That is simply false. While many do rely on third party integration, the companies listed above have their own 'unified' solutions.

They previously announced an $80 million funding round, with a $1.6 billion valuation, in January 2020, while reporting plans to enter the access control market.

Verkada developed its own proprietary access controller, following its approach to video surveillance through lock-in subscription services. While most cloud-based access control systems integrate common Mercury and HID access controllers, Verkada does not.

Verkada has significant funding and the largest sales group selling cloud-based security systems. Verkada already has 100+ salespeople, more than every video surveillance manufacturer in North America other than Axis and Avigilon. Their current valuation of $1.6 billion is more than what Motorola Solutions paid for Avigilon.

From our discussions with roughly a dozen Verkada sales team members, they are high-on-energy and low-on-detail, which is going to cause concern with users worried about code compliance and wiring.

Verkada is still planning to grow headcount significantly this year but by a few hundred less than what they planned earlier in the year, the company told Silicon Valley BizJournals:

Verkada's workforce has grown from 300 employees in January to 380 today. The plan was to grow that to around 800 by year's end but the goal now is to be at between 500 and 600 employees.

Nonetheless, even if Verkada only grows to 500 employees by the end of 2020, that would still make them quite large for physical security industry standards.

We are purchasing a unit for testing and will be publishing a test report examining the technical and operational strengths and weaknesses of Verkada's unified video and access offering.

Verkada Sexual Misconduct, Drug Use And False Claims Exposed By Bloomberg on Apr 09, 2021
Bloomberg has published an in-depth investigation into Verkada including...
Most Disrespected Manufacturers 2020 on Dec 01, 2020
200 integrators told IPVM which manufacturers they most disrespect and...
Verkada Fires 3 on Oct 28, 2020
Verkada has fired three employees over an incident where female colleagues...
Verkada Faces Sexism, Discrimination, And Cultural Challenges on Oct 13, 2020
Photos of female employees taken from Verkada's own video surveillance system...
False: Verkada: "If You Want To Remote View Your Cameras You Need To Punch Holes In Your Firewall" on Jul 31, 2020
Verkada falsely declared to “3,000+ customers”, “300 school districts”, and...
Verkada: "IPVM Should Never Be Your Source of News" on Jul 02, 2020
Verkada was unhappy with IPVM's recent coverage declaring that reading IPVM...
Comments (10) : Subscribers only. Login. or Join.