What if you could reduce your costs for buying storage, powering that storage while eliminating RAID rebuild concerns? That's the basic pitch of Veracity's "Coldstore" offering - a different approach to video surveillance focus than the JBOD or RAID options typically used. But how much does it truly save and what are the potential downsides of using it? In this note, we dig into the Coldstore to answer these questions. 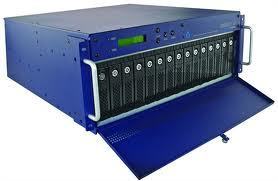 Typically, RAID storage are used in surveillance systems with higher camera counts or longer retention periods. RAID (in most cases) splits data up across multiple disks, simultaneously writing to all disks in the array. This allows the array to be rebuilt in case of one (or more, depending on RAID level) disk failure.

Coldstore works fundamentally differently, writing data across disks one at a time, in chronological order, using a proprietary file system called SFS (Sequential File System). Using SFS, drives are spun up from idle one at a time until filled, at which point the next drive is filled and previous is powered down unless video must be retrieved from it. When all drives are full, Coldstore begins overwriting the first drive and repeats the process. During writes, the risk of failure is greatest, so Coldstore mirrors data to two drives at a time to provide redundancy while the array is most likely to fail. Thus, in a 15-bay chassis, 14 drives at one time will contain archive video, with one sequentially being used for redundancy during writing.

Because of the unique way it handles data, Coldstore requires custom integration with the VMS. This list is currently limited, with many of the major VMSs absent. Current integrations include: Genetec, Video Insight, Instek Digital, SoleraTec, Digital Barriers (formerly Codestuff), Synectics, HD Witness, Pixel Velocity, and Trinity VSE. Others are in progress, but with no public timelines.

Coldstore may potentially be significantly less costly than some forms of network storage. Typically, in surveillance systems, users choose between NAS or SAN storage, depending on capacity and performance levels required. Coldstore's street pricing of ~$275 per terabyte is moderately lower than brand name NAS models, such as the Iomega StorCenter px12-350r [link no longer available] ($11,500 online, ~$320/TB). Versus enterprise-level models, such as Dell or EMC, Coldstore becomes even more competitive. Models such as the Dell NX3100 sell online for over $15,000 when fully loaded with 3TB drives, or about $434 per terabyte.

Since only two disks are in use at a time, Veracity claims the entire array may use as little as 45W while in use. Typical storage arrays range from 100-200W for smaller NAS devices to 500W or more for SANs. If Coldstore provides the energy savings claimed, users may save 450W per hour or more (versus a SAN), this may save $300 per year or more, depending on electricity rates.

With drive sizes increasing in recent years, the time and risk involved in rebuilding a RAID array upon disk failure have increased. Rebuilding large arrays with 1-2TB drives may take many hours, during which write performance is decreased, and the risk of drive failure increases, which may cause the entire array to fail. Since failures in Coldstore are most likely to be during writes, when data is mirrored, no rebuild takes place. The array marks the disk as bad, and may be hotswapped, and writes move to the next available drive.

Because of its unique file system, there are potential disadvantes to using Coldstore, as well.

We recently had an excellent discussion of Coldstore with both users and Veracity in our LinkedIn group [link no longer available]. Users seeking further explanation of Coldstore's features and performance, or who wish to ask direct questions, may see this discussion for more detail.

Dell EMC Surveillance Division Profile on Apr 20, 2017
With revenue growth from traditional IT customers slowing, Dell has set a...
Veracity Acquires PSIM Manufacturer iComply on Feb 03, 2017
Most well-known for their Ethernet extenders, with their own video...
Favorite Video Storage / Servers 2016 on Apr 26, 2016
150 integrators answered this question: "What is your favorite storage...
Comments : Subscribers only. Login. or Join.