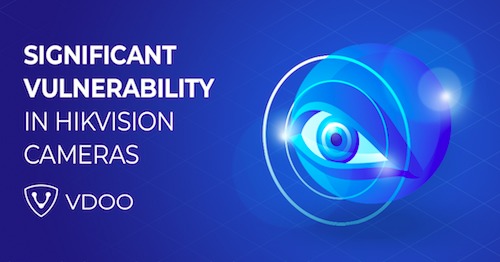 A 'significant vulnerability was found in Hikvision cameras' by VDOO, a startup cybersecurity specialist. Hikvision has fixed the specific vulnerability but has ignored the various underlying problems VDOO has called out.

Hikvision USA sent an email to dealers reiterating that they fixed the vulnerability but they ignored VDOO's recommendations entirely.

Hikvision responded to IPVM, declining any comment on the bad architectural practices, citing the previous vulnerability notice that does not address VDOO's recommendations.

Facing the fallout of 2017's backdoor and 2018's US government ban, Hikvision has emphasized that they will be transparent about cybersecurity to prove that they can be trusted. For example, their Cybersecurity Center page declares:

Hikvision makes the following commitments: ... we will continue to improve and use open and transparent methods so that users can assess Hikvision’s cybersecurity capabilities. [emphasis added]

We want to be clear: security and transparency are our top priorities and part of our long-standing commitment to you [emphasis added]

Hikvision had a great opportunity to prove its transparency on a concrete technical report from a cybersecurity specialist but has refused.

UK Installer CCTV Aware - Flat Pricing, No Salespeople on Apr 10, 2019
This is a different kind of company. They do flat pricing, they do not have...
Comments (16) : Subscribers only. Login. or Join.