Minidomes are increasing in popularity, as IPVM statistics show. However, the most common objection to using minidomes is the lack of varifocal lenses.

In this report, we tested the IQinVision Alliance-Mini, specifically the IQD52WV-B7 that integrates a varifocal lens. 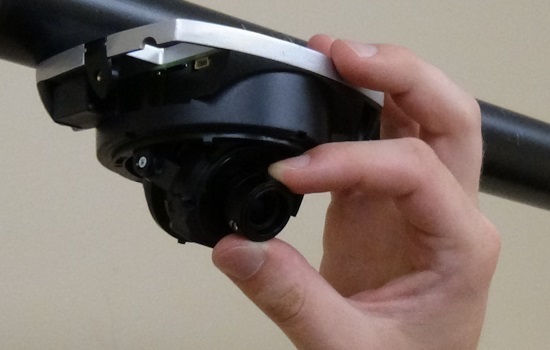 The IQinVision IQD52WV-B7 is more expensive than most compact minidomes, selling online for ~$500 USD online. For example, compare to the Axis M3005 (~$350 Online) and Bosch Flexidome Micro 5000 (~$360 Onlne). However, few competitive minidomes include features such as the varifocal lens, movable IR cut filter, and true WDR, included in the IQD52WV.

Few minidomes offer the combination of features (varifocal lens, true WDR, true day/night) found in the IQD52WV, and users seeking these options in a compact form factor may find it a good fit. Also, with WDR off, its low light performance was some of the best of 1080p minidomes tested.

However, it is expensive compared to most compact minidomes, making it less cost effective for everyday use where these features are not required. Additionally, increased artifacting in full light scenes compared to other cameras may be an issue.

The video below reviews the physical construction of the IQD52W-B7, including:

Mentioned in our physical overview video, the IQD52WV is comparatively larger in size than standard minidomes, but noticeably smaller than full sized domes, as seen in this comparison to two common Axis options:

We compared the IQEye IQD52W-B7 to the Axis M3005, Bosch Flexidome Micro 5000, and Canon VB-S800D. Cameras were staggered to compensate for differences in FOV. 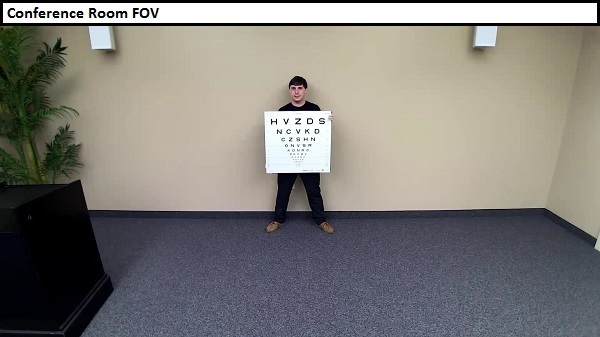 In full light, the IQD52W has a grainy image, with artifacts present in our subject's face and test chart.

In low light (~2 lux), we can see more details on our subject's face than on either the Axis M3005 or Bosch Flexidome, such as his eyes and hair style. However, the IQD52W is unable to distinguish past line 3 of our test chart, whereas line 4 in the M3005 and Canon VB-S800D is legible.

At less than 1 lux, the IQD52W is unable to produce a usable image. Only the Canon VB-S800D is able to detect our subject and chart.

For our WDR scene, cameras were shot against an exit door. The IQD52W outperforms the 3 other tested cameras, and allows us to see our subject, chart, and the background clearly, due to its true WDR capability. 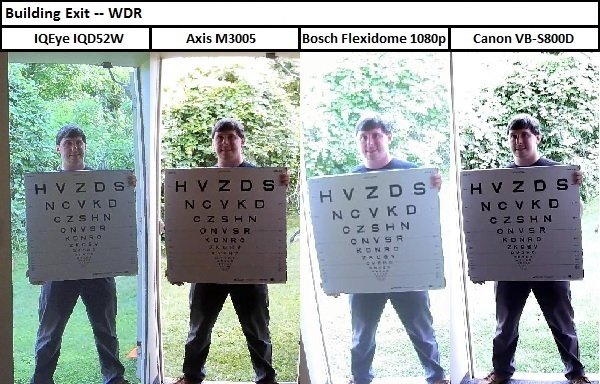 We found that the IDQ52WV's standard WDR mode (simply "enabled") resulted in increased artifacting and discoloration in our test scenes compared to their other WDR setting, named "anti-banding." We saw no disadvantage to using anti-banding vs. standard WDR in any scene and recommend it be used.

WDR is turned on by default in the IQD52W with no way to switch it off in night mode. With WDR on, increased noise and artifacting is present throughout the image, obscuring details of our subject. With WDR off, we can clearly see our subject and lines 1-3 on our test chart.

Normalizing all cameras to 1080p resolution, 10 FPS, 1/30s shutter speed, using H.264, the IQEye IQD52W-B7 with WDR Off has the lowest full light and low light bandwidth of all cameras tested. Q levels were ~27 to ~29 for all cameras.

Ranking The Lowest Cost True Minidomes on Jun 10, 2015
Minidomes are popular. But lots of manufacturers fake being truly mini. To...
Fall 2014 New Products Directory on Sep 23, 2014
New releases are weak this year, and unfortunately, the trend does not appear...
Comments (1) : Subscribers only. Login. or Join.