The company claims $263 million in 2013 revenue and to be the third largest Chinese surveillance manufacturer (after Hikvision and Dahua).

Despite being owned by American investment firm Bain Capital and spending hundreds of thousands on an ISC West 2014 booth, Uniview [link no longer available] is not well known internationally.

However, given their size and the strong interest IPVM members have in Chinese cameras, we decided to test a Uniview camera.

We tested their high-end 1080p box camera, IPC542E-DU [link no longer available], claiming both super low light and true multi-exposure WDR performance. The camera has a 1/1.9" imager which is one of the largest we have seen in 1080p cameras. Despite these features, the pricing was extremely low.

Competitors tested against the Uniview included high-end models from:

Below is a preview of our WDR test showing how each camera did in the outside / bright area vs the inside / dark area: 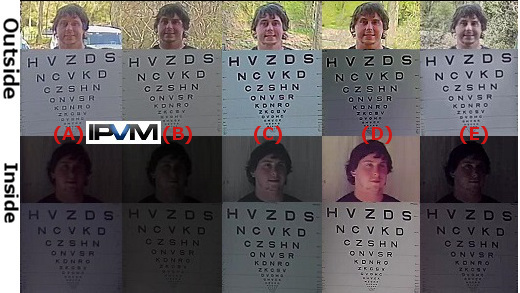 In this report, to determine how Uniview matches up against major competitors, we answer these questions:

The IPC542E-DU has an estimated street price of ~$500 USD (not including lens) based on dealer cost and expected markups.

[Update: Originally, we listed the estimated street price as ~$350 based on the dealer price they originally told us. However, they now they say the actual street cost for end users would be higher, so we are now estimating ~$500.]

This is significantly less expensive than 1/2" imager super low light models from competitors such as the Axis Q1635 (~$1300 online) and Sony SNCVB635 (~$1900), and even hundreds less than these competitors' 1/3" low light models.

Contact Uniview for information on availability as they are still in the process of building their channel.

Note Uniview has no North American based sales or support staff, so those considering them should account for time differences and delays in support versus manufacturers with local operations.

Given its low price and strong performance in low light and WDR scenes, along with low bitrates, the Uniview IPC542E-DU is a strong contender against top models from big name manufacturers.

That being said, Uniview's lack of a North American sales and support structure limits their potential for adoption, as many integrators and end users may be turned off by these issues.

The IPC542E-DU is fairly unremarkable as box cameras go, with the standard array of ports on the back: Ethernet, I/O, audio, SD storage, etc. Note that the IPC542 includes a manual back focus adjustment, and no option for remote focus through the web interface.

This comparison shows the difference in size between the Uniview 1/1.9" image sensor and a typical 1/3" sensor used by competitors: 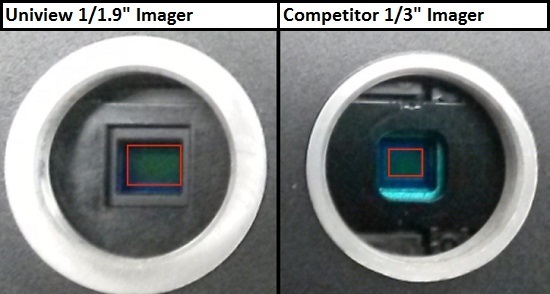 The Uniview web interface was simple to use, with settings logically laid out in multiple menus. Most configuration options are found on the Image (exposure, image adjustments, WDR, etc.) and Video (CODEC settings) tabs.

The IPC542 is ONVIF Profile S compliant, though uses non-standard port 81 to connect. Using this port, the camera connected and streamed via ONVIF to Exacq and Genetec without any issues, though no advanced features such as VMD, audio, I/O worked. The camera added to both Avigilon and Milestone XProtect, but no video streamed.

RTSP streaming worked without any issues in all platforms.

We first tested the Uniview camera against competitors from Axis, Bosch, Hikvision, and Samsung in this interior conference room field of view, from ~160 lux down to 0.01. 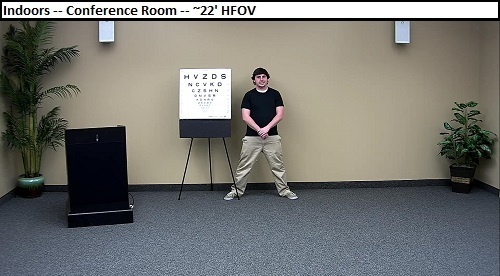 In full light, the IPC542 evenly exposes the subject, with no issues.

In the dark, the Uniview camera is among the best non-IR cameras tested, slightly behind the Samsung SNB-6004, though better than the Axis Q1615 and Bosch NBN-932V. The chart is legible to line 3/4, though subject details are obscured.

Next, we tested WDR performance in this warehouse scene, against strong outdoor backlight through an open overhead door, and in the dark area next to the door.

In this scene, the IPC542E was the best performer, with clear visibility of the subject and chart against strong backlight, and significantly better, brighter images in the dark area beside the door, with subject details clearly visible. 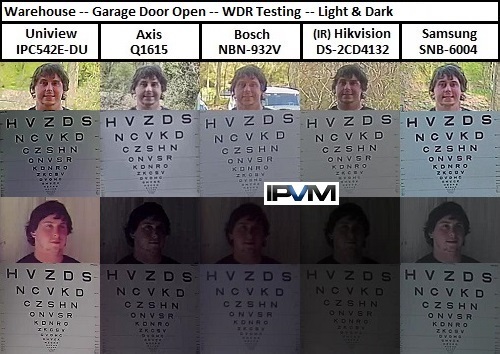 The IPC542E-DU had some of the lowest bitrates seen in full light, and the lowest of any non-IR camera in this test in low light (~1.5lx) and dark (~0.01lx), seen in the chart below. These measurements were taken using H.264, 10 FPS, with quantization standardized to ~28.

These VMS versions were used for testing:

Uniview (UNV) IP Cameras Tested on Feb 22, 2017
"We're #3," in China says Uniview (UNV). While the company significantly...
UNV Challenges Dahua and Hikvision Internationally on Apr 21, 2016
UNV (aka Uniview) bills themselves as the 3rd largest manufacturer in China,...
Dahua Starlight 1/2" Camera Tested on Oct 16, 2015
In super low light, an area that the West has long dominated, can the Chinese...
Hikvision Darkfighter 1/2" Imager Camera Tested on Aug 31, 2015
Can Hikvision beat Axis and Samsung in pure low light? The Chinese...
WDR Camera Shootout 2015 on May 04, 2015
This is the most comprehensive Wide Dynamic Range (WDR) IP camera shootout...
Comments (15) : Subscribers only. Login. or Join.