Can a $100 HD network camera change the surveillance industry? We are about to find out as Ubiquiti, a company whose massive growth has disrupted the wireless network industry commences its attack on the video surveillance market.

What makes Ubiquiti really interesting is that its market approach fundamentally opposes all industry norms. An American company, they focus on making very low cost products without any real spending on sales, marketing or PR. They leverage forums and Internet 'word of mouth' to build their customer base. They already have a huge customer base in the wireless market. Despite selling primarily $100 radios, the company did a whooping ~$200 Million in revenue in the last year.

In the past few months, Ubiquiti has started to roll out their own IP cameras and VMS software. They are taking the same approach in surveillance as they did in wireless, releasing very low cost cameras and free VMS (for details, see our Ubiquiti surveillance  product line overview). 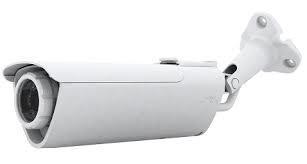 While the price is outstanding, we wanted to see how well Ubiquti's surveillance cameras really performed head to head against reputable incumbents. To do so, we did a series of shootouts between Ubiquiti's Aircam Bullet, an Axis SD camera (the M1011), an Axis HD camera (the M114) and an IQ 4 series 2MP camera. While all the cameras are color only entry level models, the competitive offerings represent higher quality professional options.

We did a series of tests:

From our hands on testing, here are the most notable findings:

All in all, the Ubiquiti Aircam Bullet is a solid camera and attractive because of its very low price. Given that this is Ubiquiti's first ever camera, it is quite impressive. Very low cost cameras from new entrances are typically buggy, hard to set up and have significant problems.

On the other hand, the Ubiquiti camera is across the board clearly inferior to the Axis entry level HD camera though the Axis M114 is more than 4x the price (~$100 vs ~$470) [Note the Axis M1114 has a varifocal lens while the Aircam Bullet does not. However, even against the Axis M1104, a fixed focal camera, the price variance is still 4x].

For $100, users looking for very inexpensive but nearly HD video quality in well lit areas, will find the Ubiquiti Aircam Bullet highly attractive. They will have a difficult choice in VMS integration - (1) Ubiquiti's own free VMS that lacks 3rd party support and is fairly basic or (2) integrate via RTSP to a 3rd party VMS and configure the camera through its web browser.

For those looking at a cheap entry level 4 or 9 channel system, a Ubiquiti based solution is the most price competitive IP alternative to cheap DVR kits yet. The pricing is close and nearly identitical if any older/existing PC can be used. Plus, the image quality will clearly be better with the Ubiquiti than an SD / interlaced analog camera.

This camera is clearly not a replacement for professional IP cameras nor is it for those who want best in class image quality. Ubiquiti is planning to release a professional line of IP cameras in 2012. It will be interesting to see how well those will compete when that occurs.

We think Ubiquiti's line will have the most immediate impact on the budget surveillance market, specifically ACTi, Hikvision and Vivotek. Ubiquiti's cameras are already easier to use than those brands, have similar image quality and are cheaper.

From an American company perspective, there are some similarities to Arecont Vision but we do not see Ubiquiti having much of an impact on Arecont as Arecont overwhelmingly sells multi-megapixel cameras. However, over time, we do think that Ubiquiti can overtake Arecont as the low cost brand of choice in the market.

The video below looks at the camera's physical features. The two most important to pay attention to are the non standard mounting system and the challenging method for fine focusing the lens.

One other important physical / installation aspect is the requirement for a non standard power over Ethernet injector. Ubiquiti includes one that can be setup just like a normal PoE injector including requirement to be plugged into mains power. However, of course, you can not plug the Ubiquiti straight into a regular PoE switch. Note: As a commenter mentions, an inline PoE adapter can be bought separately for about $20. This eliminates need to plug into mains power. 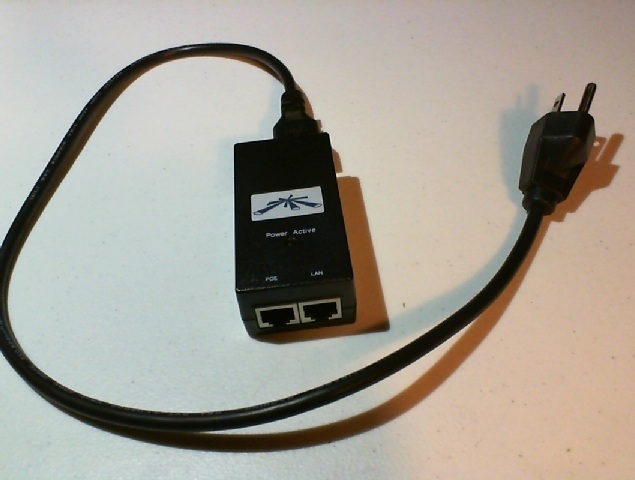 The video below shows the basic settings of the camera and the use of Ubiquiti's own AirVision NVR.

While AirVision NVR is beyond the scope of the test, as it is designed to be the free compliment to Ubiquiti's cameras, a few points are worth making:

The Ubiquiti camera was outperformed in low light testing in normalized, same shutter speed tests. Here it is at 1 lux: 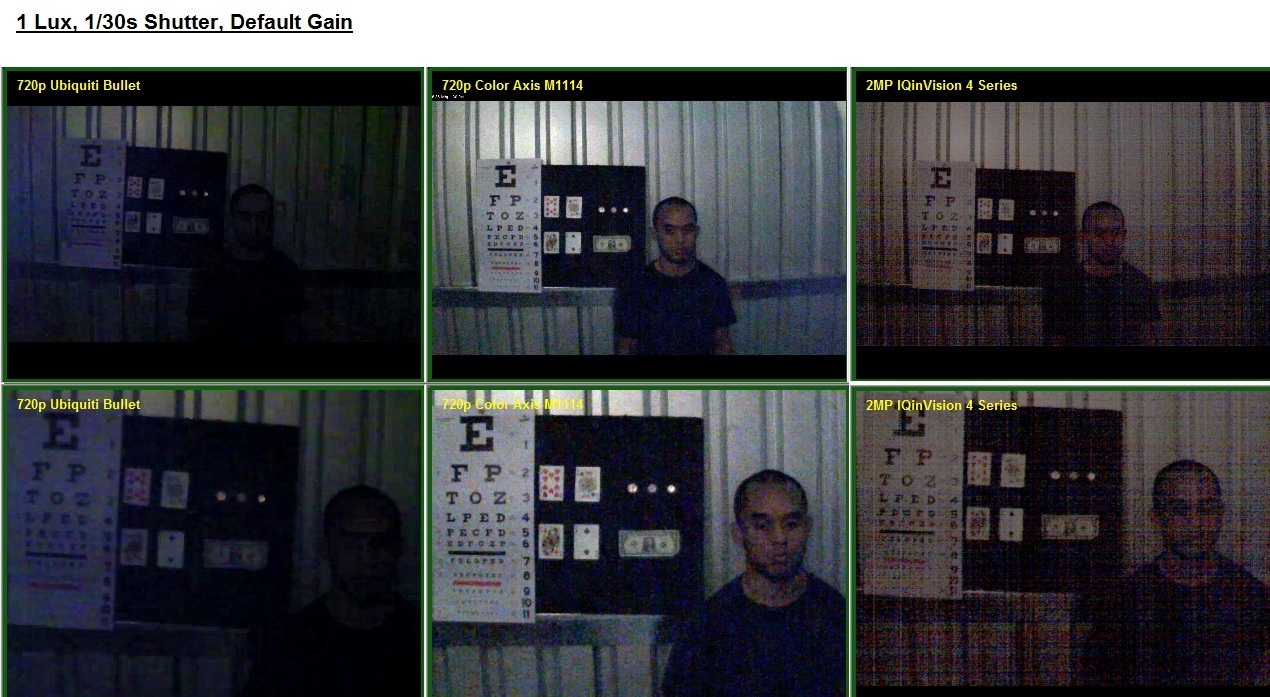 The Ubiquiti image is dark and muddy. The competitive difference would be even more significant if we allowed the Axis and IQ cameras to go to their default slow shutter speed (though this would increase probability of motion blur). 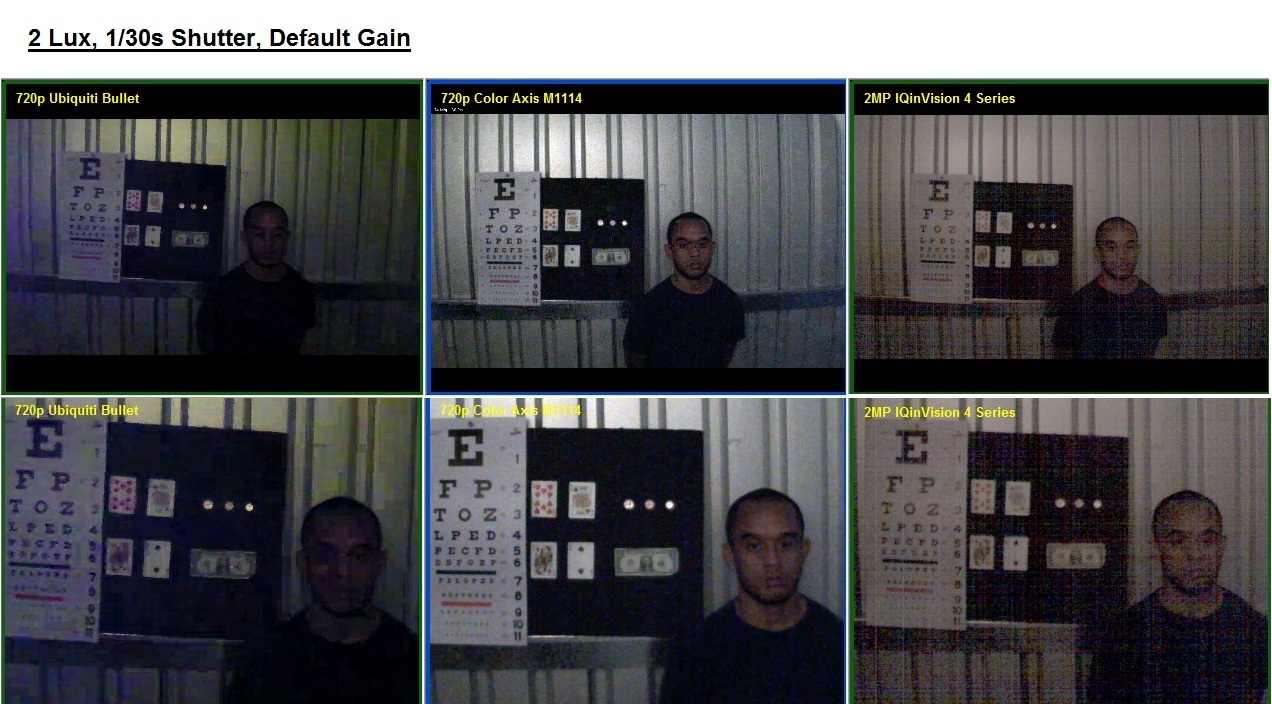 All the images clearly improve but the relative performance gap remains the same.

Now here are the results from 6 lux: 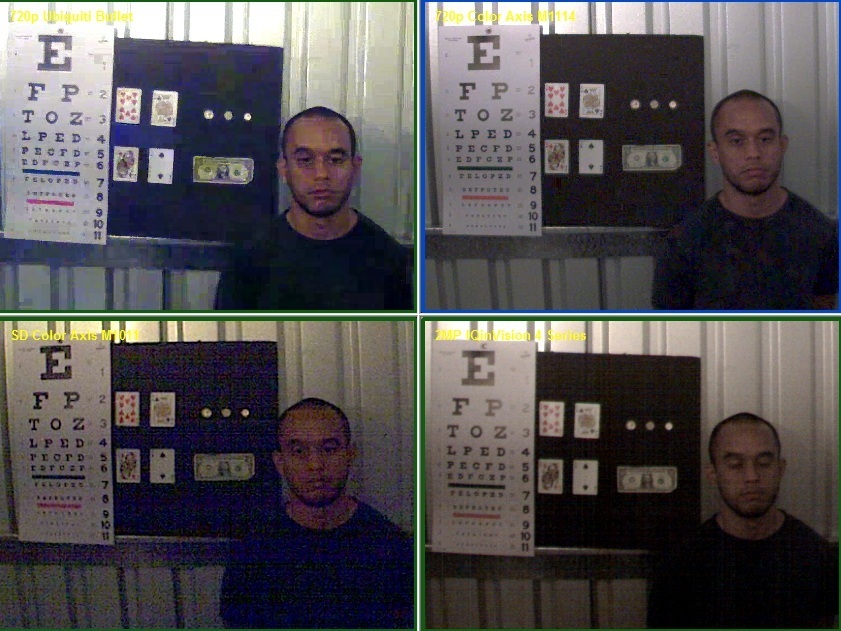 In the 6 lux example above, we have the SD Axis included which is clearly the worst image of the 4 cameras.

Now, let's examine with more light, this time at 16 lux: 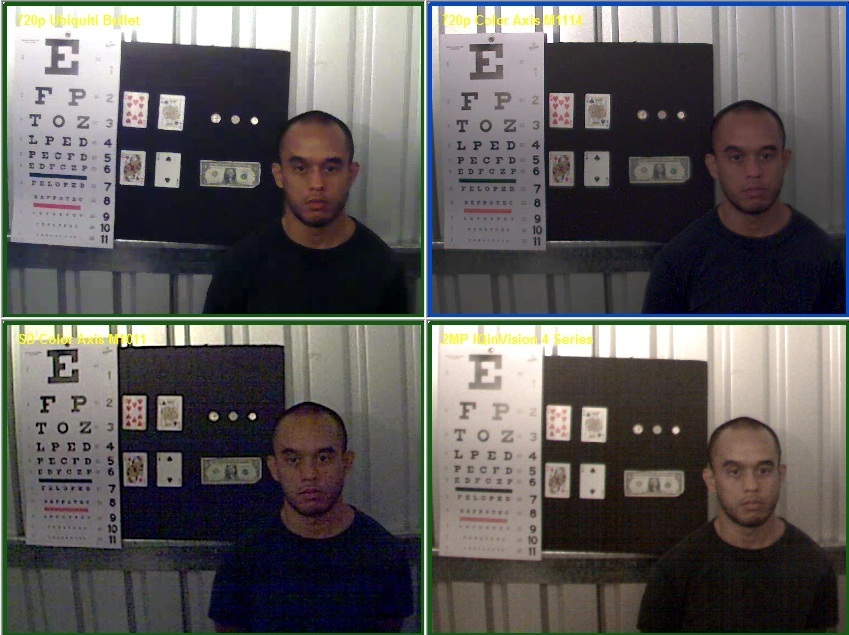 Now we move to 250 lux scene which is the equivalent light level of an office: 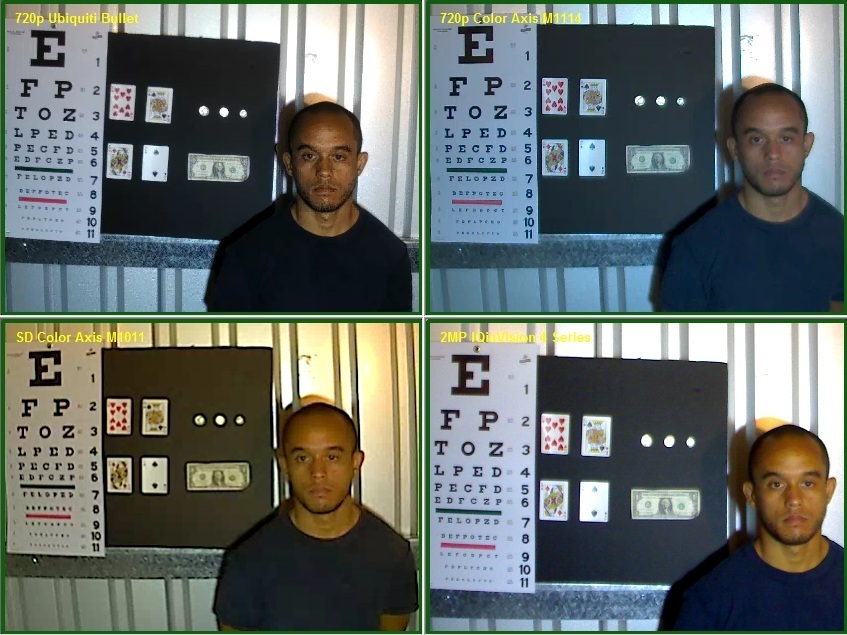 Finally, we tested for longer ranges and wider field of views. One point to keep in mind was that the SD Axis M1011 has a slightly narrower FoV than Ubiquiti (because both have fixed lenses).

In the image below, the 'mid' range of approximately 40' wide FoV. The Ubiquiti's image details are close to the HD Axis and significantly above the SD Axis. However, the 2MP IQ clearly provides more details than all others. 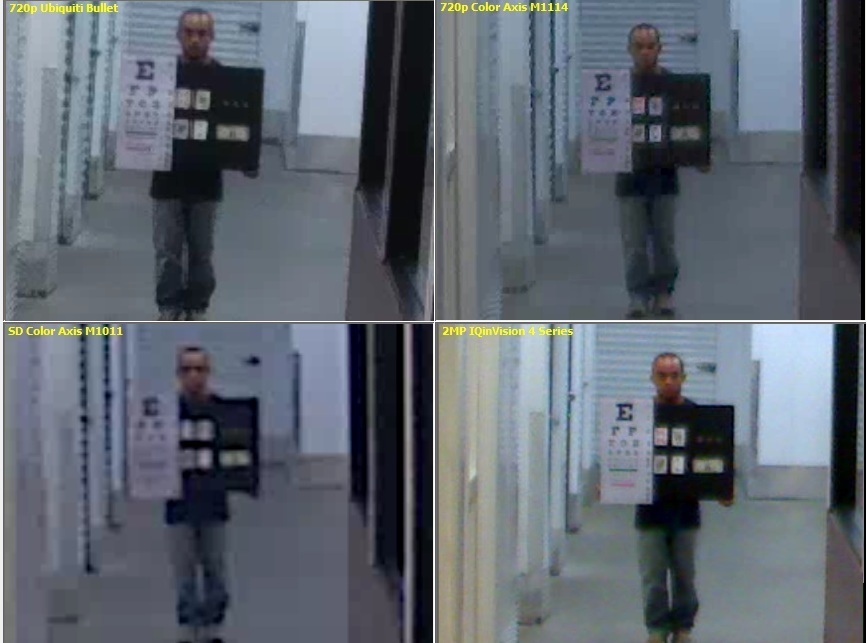 Finally, here is a long range comparison of approximately 80' wide FoV. Here the Ubiquiti captures moderately less details of the subject than the HD Axis. However, it is still much better than the SD Axis even with its slightly narrower FoV. 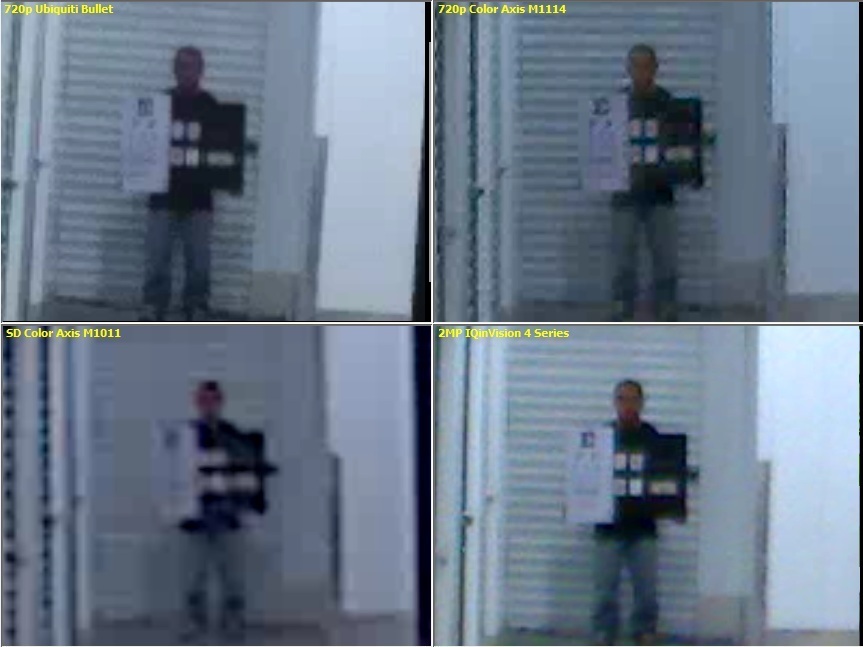 Ubiquiti Open IP Cameras Tested on Apr 04, 2016
Back in 2011, Ubiquiti broke ground, offering IP cameras for the then...
Ubiquiti Micro HD Camera Tested on Jul 13, 2015
With nearly $600 million in revenue, Ubiquiti has become a major force in...
Top 5 Disruptive Surveillance Companies 2012 on Dec 15, 2011
What companies are driving changes in the video surveillance industry? What...
Comments : Subscribers only. Login. or Join.