Elerts main offering, Campus, combines a smartphone app and monitoring platform built around the concept of "See Something, Say Something." Organizations, such as colleges or mass transit police departments, buy / deploy Elerts allowing their students / riders / users to download the app to their smartphones and connect to them.

The basic layout of the mobile app allows a user to directly contact security or law enforcement, request assistance, fill out trouble reports, or even receive mass notification alerts. Typical app screenshots are shown below:

Everyone who wants to use this service, needs to down the elerts app or customized version of it. This is not available from inside common social media apps - Facebook, Instagram, etc.

Elerts is promoting a 'virtual escort' feature that allows a remote user to request security as they walk potentially dangerous areas like parking garages. Once the command is queued by the user, the call goes to a central security station who acknowledges the request.

Users must remain engaged with the app by keeping the button pressed. If they release the phone's button, the phone acts like a 'deadman switch' that sends a distress call to the security department: 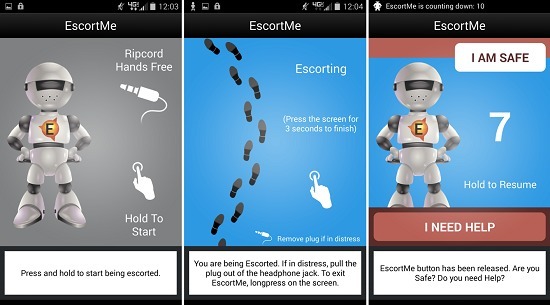 Security operators have access to a dedicated web console / portal where they can manage and respond to alerts.

For example, the image below shows a tracked path of a user utilizing the 'escort me' functionality. 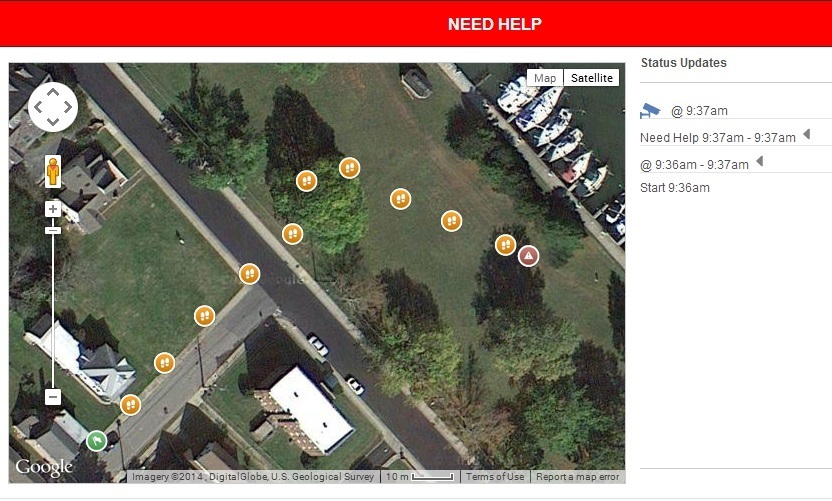 And here is an example of an report received with an image provided by a user:

On the web console side, surveillance video cannot be streamed / display. However, Google Maps integrated overviews / representations of cameras can be overlayed, like so: 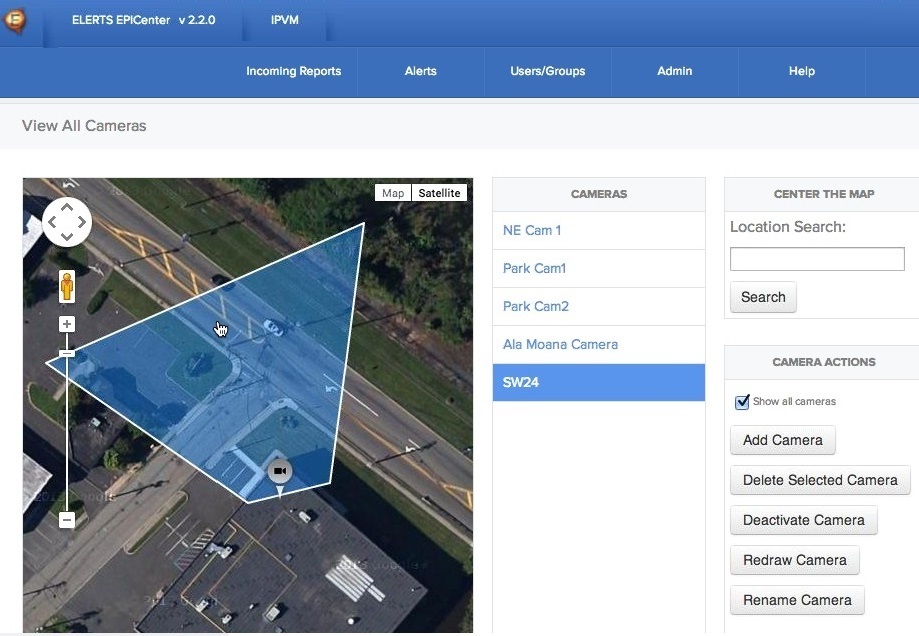 These graphic representations are set up by the admin / integrator and are key to integrating with VMS systems.

Elerts sends messages to VMSes with information on event type and closest camera. Elerts determines which camera is relevant by associating the GPS of the phone to the coordinates of the graphical representations of cameras on the map (above example).

The VMS can then dynamically pull the associated camera, based on the instructions from Elerts.

Elerts says they have a "Cloud Driver (Boomerang)", that essentially proxies command from our cloud to resources on the customer’s LAN, like the video management system. It does not need to be installed on the same machine as the device, it just needs to be on the same network so it can communicate directly.

[Note: An earlier version said Elerts needed a port to be opened in the organization's firewall. Elerts responded afterwards with updated information.]

After laying down each camera on Google maps inside Elerts web console, the integrator then needs to map those to specific cameras on the VMS.

Elerts reports integration with a number of VMSes including Exacq, Genetec, Milestone, OnSSI and Verint

Elerts Campus is sold as an annual license to organizations and is typically free to end users. The annual pricing ranges from $3,000 to $10,000 depending on size of the organization and desire for integrations with 3rd party systems, like video surveillance.

Elerts also offers a more sophisticated service called 'Lock It Down' optimized to speed response to active shooting. This includes sharing information across the entire organization, automatically initiate lockdowns and other commands.

For larger organizations, the pricing is relatively low.

Key to adoption will be whether students, employees, people first download the app and secondly use it in emergencies. Given the app overload people face and the rarity that most would typically use this, it could be a concern.

Video surveillance integration is fractured, as the operator needs to switch between the web console (which has no video streams) and the VMS (which has limited information / commands available).

Overall, this is a growth area for security technology that is worth watching.

Other companies in the space include Guardly. Guardly has much more media coverage though has no focused as much on integration / cross-marketing to security system users. IPVM has not analyzed this space enough to properly compare / contrast these companies in detail.

Also, incumbent emergency services like 911 may grow to include information useful to location dispatch. For example 'enhanced 911', or 'E911' automatically includes GPS locations or map grid coordinates of callers for emergency dispatchers.