The US government announced sweeping sanctions, which had previously been reported to target only SenseTime, against 15 entities and 10 individuals tied to human rights abuses. The action bans all US investments in SenseTime, the PRC's most valuable AI company, the same day the company planned to price its IPO. 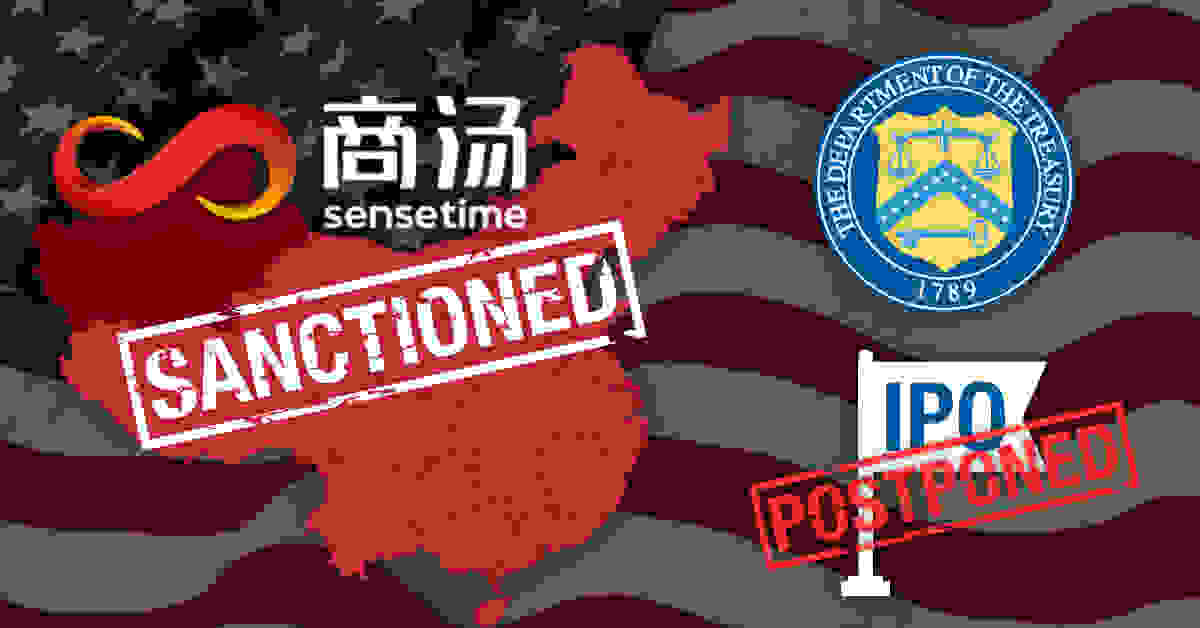 The Treasury Department's Office of Foreign Assets Control (OFAC) addition of SenseTime to its list of 'Chinese Military Industrial Complex' companies (NS-CMIC) forces US investors to divest within 60 days of the announcement and threatens SenseTime's upcoming Hong Kong IPO:

UPDATE: SenseTime responded to the sanctions saying "we strongly oppose the designation and accusations that have been made in connection with it" and "we regret to have been caught in the middle of geopolitical tension."

In a statement accompanying the sanctions, Deputy Secretary of the Treasury Wally Adeyemo said:

Treasury is using its tools to expose and hold accountable perpetrators of serious human rights abuse. Our actions today, particularly those in partnership with the United Kingdom and Canada, send a message that democracies around the world will act against those who abuse the power of the state to inflict suffering and repression.

The United States seeks to impose tangible and significant consequences on those who commit serious human rights abuse or engage in corruption, as well as to protect the financial system of the United States from abuse by these same persons.

SenseTime was previously added to the Commerce Department's Entity List in 2019 over involvement in PRC mass surveillance and human rights abuses:

A loophole reported by IPVM, however, rendered the measure largely ineffective. SenseTime has distanced itself from Xinjiang, e.g. telling The Financial Times it "barely has any business in Xinjiang." SenseTime also told IPVM discrimination is "against our values."

Treasury sanctions, which in the past have focused on terrorist groups and rogue states like the DPRK, are not easily thwarted. OFAC has been called "one of the most powerful government agencies no one’s ever heard of."

The action stems from a Biden executive order signed in June which empowered OFAC to sanction "Chinese surveillance" companies for posing an "unusual and extraordinary threat" to US "national security, foreign policy, and economy:"

The threat from securities investments that finance certain companies of the PRC and certain uses and development of Chinese surveillance technology continue to pose an unusual and extraordinary threat to the national security, foreign policy, and economy of the United States. [emphasis added]

SenseTime touts itself as the PRC's largest AI company and recorded ~$541 million in revenue for 2020. The firm focuses on AI applications, notably facial recognition for PRC police and commercial uses (smartphones, buildings, etc).

SenseTime planned to IPO on the Hong Kong Stock Exchange on December 17, aiming to raise up to $767 million with and earning a valuation of ~$17 billion. This would make SenseTime the world's largest publicly-listed AI/face rec company.

Being added to the CMIC list means US persons or entities must divest entirely from SenseTime within 60 days, and new investments are prohibited.

Numerous US companies and venture capital firms are shareholders, per its IPO prospectus:

SenseTime's addition to the NS-CMIC sanctions just a week before its scheduled IPO creates significant uncertainty, with Reuters reporting that SenseTime is currently "discussing the fate" of the IPO with the Hong Kong Stock Exchange.

This action does not address the loophole allowing SenseTime to obtain US technology.

SenseTime was added to the Commerce Department's Entity List in October 2019, substantially restricting its ability to get US technology. However, as IPVM and Axios reported, SenseTime touted no "material adverse impacts" because it is technically against its subsidiary Beijing SenseTime rather than SenseTime itself. The Entity List remains unchanged since IPVM/Axios reported this:

PRC state media Global Times said the sanctions showed that AI is the "next target of US tech suppression": 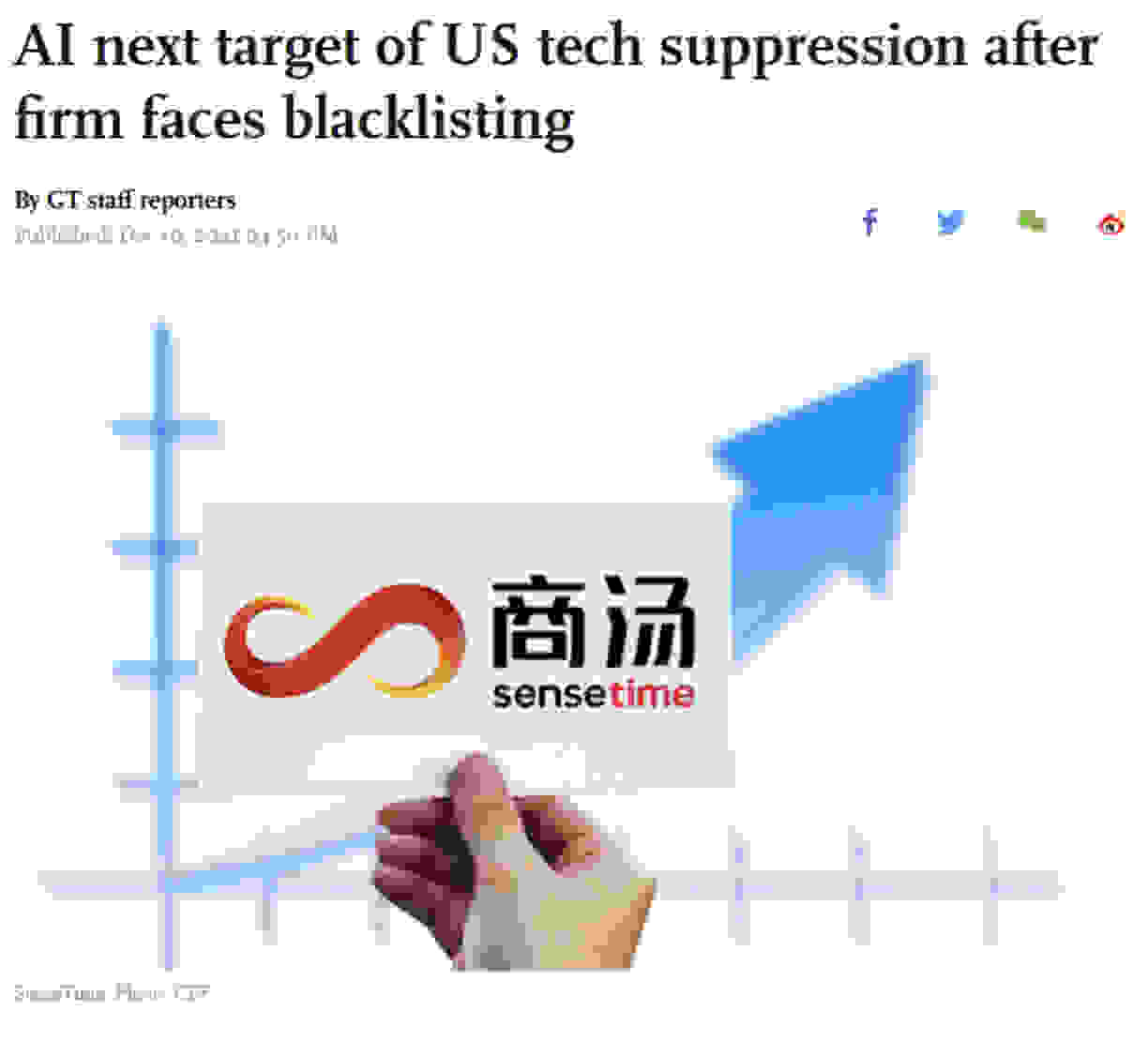 Global Times quoted a PRC tech analyst that "AI represents a core breakthrough in China's tech competition with the US, and is the reason why the US will focus on suppressing Chinese AI firm."

In a statement sent to IPVM, SenseTime said "we strongly oppose the designation and accusations that have been made in connection with it" and "we regret to have been caught in the middle of geopolitical tension", touting its AI Ethics Council:

We strongly oppose the designation and accusations that have been made in connection with it. The accusations are unfounded and reflect a fundamental misperception of our Company. We regret to have been caught in the middle of geopolitical tension.

As a software company committed to promoting sustainable, responsible and ethical use of AI, we have complied with the applicable laws and regulations in relation to our business in all material respects in the jurisdictions where we conduct business. Our AI Ethics Council, comprising both internal and external experts, ensures that our business strictly adheres to recognized ethical principles and standards. We have developed a Code of Ethics for AI Sustainable Development, and we collaborate closely with third-party institutions and international organizations to ensure the responsible and sustainable development of AI technology.

We are an entrepreneurial company founded by AI scientists and practitioners with an aim to use technology to improve people’s lives. We remain committed to accomplishing our mission to create a better AI-empowered future through innovation, and will take appropriate action to protect the interests of our Company and our stakeholders.

The Biden administration's broad action to restrict authoritarian countries' surveillance usage and sanction human rights abusers indicates that the White House will continue to target PRC surveillance companies involved in Xinjiang. This increases the likelihood of further measures against other firms, which could include Hikvsion, Dahua, and others tied to Uyghur human rights abuses.

2022 Video Surveillance Cameras State of the Market on Jan 04, 2022
Each year, IPVM explains the main advances and changes for video surveillance...
How SenseTime And a US Law Firm Got Around US Treasury Sanctions on Dec 30, 2021
SenseTime says its US shareholders do not have to divest, despite the US...
US Sanctions DJI And 4 Video Surveillance Manufacturers on Dec 16, 2021
The US Treasury Department sanctioned eight PRC companies by adding them to...
Comments (4) : Subscribers only. Login. or Join.