All of a sudden, Access Control has momentum? After a long period of apparent stagnation and staleness, new technologies and devoted marketing campaigns have breathed life into the segment. Indeed, while the recent ISC West show was thin on new video releases, a myriad of new access platforms and related technologies made their debut.

While the noise surrounding access has increased, what general trends worth keeping an eye on? To make this task easier, we hosted a "Trends in Access Control" seminar at our ISC West event and discussed the following points:

If you did not join us, feel free to download our presentation from the meetup. Those attending were a mix of end-users, installers, manufacturers and consultants, and a variety of perspectives were offered. We've added that feedback to each point below:

The RISE of Mobile Credentials

One of the hottest areas of access pertains to the use of cell phones as hosts for credentials. Perhaps the most heavily marketed products are NFC-based (Near Field Communication) being pushed by HID and IR. Despite the enthusiasm and wild 'revolutionary' claims, we are hesitant to claim mobile credentials are ready for primetime deployment.

Do mobile credentials solve problems, or create new ones? That was the line our discussion look during the seminar, and unquestionably the attendees voiced skepticism and concern over 'going mobile'. Aside from the uncertainty of a new technology, the room was not convinced that administering credentials on strange devices or the cost of changing over to supporting the new types are worth the trouble. Indeed, many claimed that mobile credentials lack 'killer' justification.

The detailed concerns we raised in our NFC report last year certainly remain.

Regardless of reality, manufacturers were pumping NFC sunshine on a regular basis. We stopped into the IR booth and (warily) listened to the pitch for the new 'AptiQ Mobile' offering. 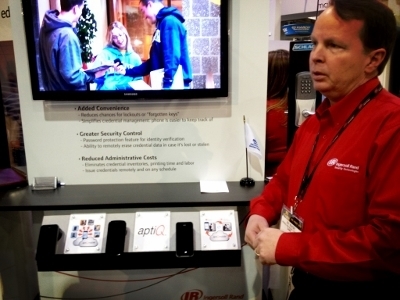 Unfortunately, IR's offerings have no unique answers for the same issues HID is facing with credential management or migrating mobile credentials into a 'blended' environment using employee-owned devices.

The RACE to 'Control the Uncontrolled'

There are millions of doors not controlled by access systems. The reasons for the gap between mechanical keys and full-blown enterprise access range from "impossible to power/connect" to simply "too expensive". This 'uncontrolled' doors gap is generating many new products and systems. 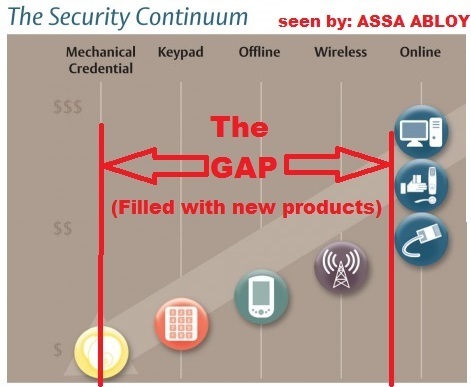 Indeed, at this show, we saw several new and recently introduced products on display:

While not every product is a 'winner' in this segment, the sheer volume of new products here is notable. Several of these products were up for ISC's "New Product Showcase Awards", including Mul-T-Lock's Super RMR Padlock: 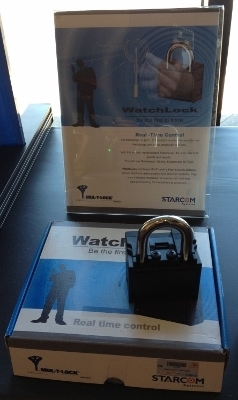 While not a new trend, the proximity between VMS and Access Control Systems continues to shrink. Indeed, several players from either segment announced software enhancements for managing video and access from a single interface. On the other hand, most continue to add limited integration between different platforms.

One bizarre move was access player AMAG announcing a line of branded HD Cameras [link no longer available] to accompany its mainline enterprise access platform. Unfortunately, this is not fusion but an opportunistic attempt to OEM cameras to grab sales from the video side.

The STANDARDIZATION of Credentials

Albeit a quieter trend, but still legislatively strong, many organizations are pushing to homogenize credentials regardless of where they are issued. The push to correlate 'identity' with 'credentials' is rooted in the operational desire to administrate physical and logical access based on a single certificate.

While efforts like FIPS-201 have been bogged down by inefficiency and confusion, the mandate is still there and driving incremental, but real, changes in how credentials are used and what information they contain.

The CLAMOR for Interoperability

Riding the 'success' of ONVIF in video, calls for similar interoperability standards in access are early but growing. Unlike video, however, PSIA appears to have the early lead on access adoption with both a published standard and several 'plugfests' behind it as proof of concept.

However, unlike video, no strong manufacturer leadership has emerged. The broad-based support for interoperability in surveillance is not existent in access control with several key players remaining mum on which standard(s) they will pursue until the defined standards become clearer.

We also spent several days walking the show floor and had a great opportunity to survey the booths. Here's a short roundup of what we saw:

Biometric Readers: While a variety of biometric readers were displayed, including a new Iris Scanner for Vehicle Gates, the entire segment appears to be slogging through the same design and engineering issues it has dealt with for years. Take the photo below as example: 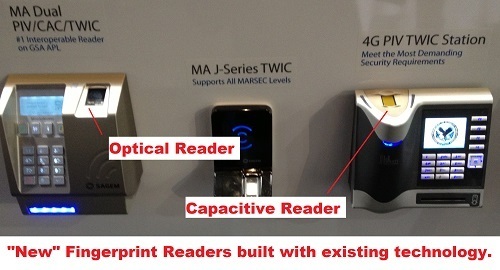 The more expensive, but more accurate and weather resistant optical-style reader is shown on the left, while the less costly, but indoor-only capacitive reader is on the right. The technology issues being wrestled with now are still waiting for the underlying technology to offer solutions.

New Hirsch/Indentive Platform: This new platform claims to allow an expensive high-security brand to compete with the likes of Lenel and SoftwareHouse. While it does not break any ground functionality, the lower price point will increase competitive options. 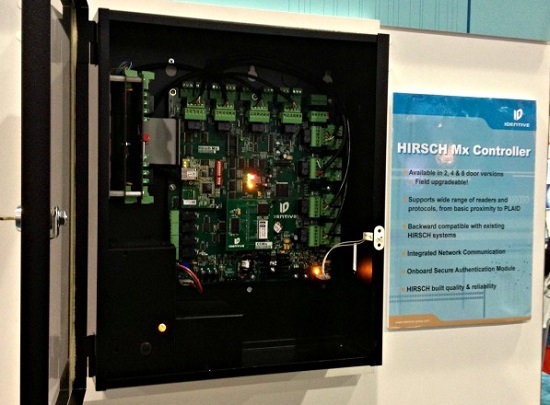 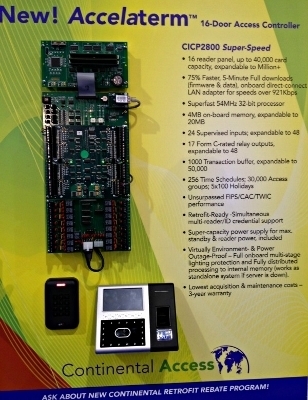 The world's smallest controller?: Several members mentioned Infinias [link no longer available] to us at the event, describing the virtues of the platform, notably its rugged design and small form factor. We spent time talking with the company and learning more about the product. 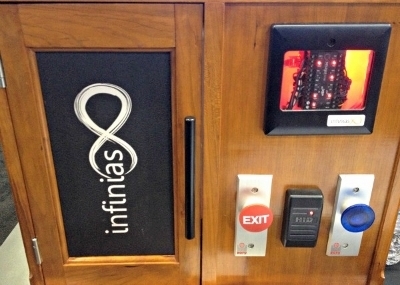 At face value, the offering has a mix of low pricing (<$500 per door), IP architecture, and scalable sizing (one to hundreds of doors) using the same model of controller. The system appears ideally situated for the small-medium markets. Catch our upcoming review for more details.