When picking products, the obvious starting point is what is needed for the application. That will narrow down your options but many manufacturer's products will meet basic functional specifications. What then? Do you simply pick the product with the lowest price? Or the best known brand?

In security and surveillance systems, it is very important to factor in the manufacturer's overall positioning. Products that look similar often have much different value over the long run.

Rating What to Use

We faced this ourselves in determing how to rate 40 manufacturers in our recent Buyer's Guide. Below is a visual example of how we structured the results: 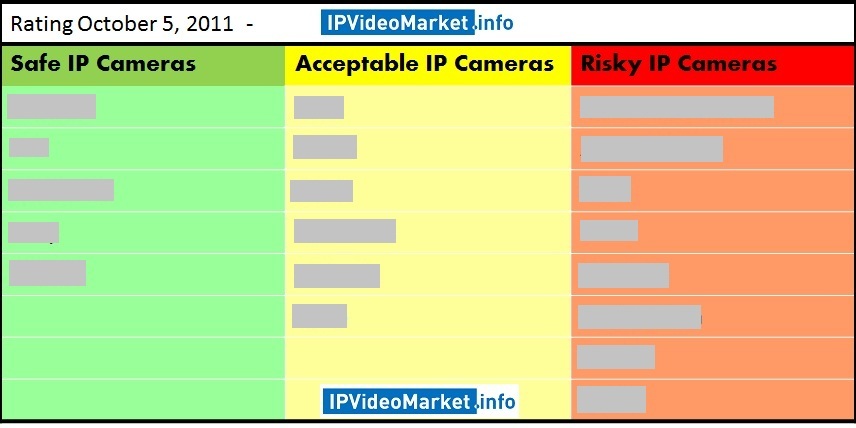 As we did the analysis, it became clear that the manufacturer's overall strength was as an important factor as the specific technical features the specific product offered. In this article, we explain why.

When you are dealing with technology systems, two key factors exist that are uncommon in day to day purchases:

Such issues are completely foreign when choosing a pizzeria or picking out paper towels. With such purchases, you figure out the best thing for then and there, use and dispose. However, with surveillance, your choice is something that you need to rely on for years ahead to do different things.

Because of this, 4 important risk factors exist in selecting manufacturers.

The reality is you will need products to work, be serviced, upgraded and integrated with others for many years to come. Each of these elements is a major risk to fulfilling that need.

Let's break each one down:

They will argue that the benefit of buying their end to end 'solution' is that users will have one throat to choke whenever a problem arises. I agree there will be just one throat to choke. Unfortunately, it will most likely be the user getting choked by the manufacturer. Nothing makes life happier for a bad manufacturer than a locked in customer.

Here's a great quote from an end user in our recent examination of 'Owning the End User':

"Unfortunately we are handcuffed to this company unless we want to shell out millions for numerous forklift upgrades.  So they have us over a barrel and they know it.  Due to that we are stuck with an antiquated card access and alarm system. They barely even show us new products made and pushed by their own company because it would cost them to do some of the upgrades. It is horrible."

Don't kid yourself. This happens all the time - all over the world.

Very frequently, large companies that call themselves 'manufacturers' or 'developers' primarily relabel or 'OEM' products from other companies. These companies almost always hide these agreements, knowing the value of misleading users into thinking that they were the developers, not simply re-sellers. We had a great discussion about this a while back: "Does Your Manufacturer Make their Own Products?"

Stay away from OEMs. Here's why:

Figuring out who is OEMing is difficult as these 'manufacturers' usually fight extremely hard to keep this a secret. The most famous example is OnSSI who adamantly claimed they developed their own VMS for years even in the face of pretty much everyone believing that OnSSI OEMed Milestone and even after we produced a video that showed their server software was exactly the same as Milestone's. Finally, OnSSI issued a press release [link no longer available] saying Milestone was an 'ingredient OEM'. Now OnSSI confuses the sitaution further with its over-promised, under-delivered middleware/client on top of Milestone's VMSes. Another recent example is American Dynamics OEMing ExacqVision for AD's HDVR series.

A lot of users focus too much on the short term, looking at how 'supportive' the local sales person is. OEMs usually have aggressive sales people who are hungry and skilled at closing the deal. However, the end user needs to look at how the OEMed product will be supported, fixed and expanded in the years to come, long after that salesman has moved on to pushing another product.

Startups can burn out. It's a fact of life. This is not a problem if the startup is a Web 2.0 facebook social game that can be abandoned and forgotten tomorrow. However, it will be a very painful fact of life for buyers of surveillance products from startups. That gee whiz PSIM, genuis video analytics or fancy VMS can become an anchor around a user's neck if the startup burns out. No more upgrades, no more servicing and serious problems in integrating with other systems. It's not simply startups going out of business. What happens very often is that the company and investors realize that the business is a dud and sell it off for pennies on the dollar. Most of the time, the buyer invests little in new product development and tries to milk what they can out of the existing offering.

The number #1 issue to look for is lots of VC fund raising. Companies raising tens of millions in the surveillance market are very high risk. The market is just not that big and the actions of these companies are often incredibly wasteful. We digged into 3 of these high risk companies in our Mistaking Surveillance Startup Success review.

Innovation from new companies is great but you definitely want to see those companies quickly becoming profitable and self-sustaining. It is the most important thing that will keep those companies alive, especially in periods of high economic uncertainty like today.

On the other side, there are quite a number of older companies, manufactures who were stars a decade ago, generating profits and accolades then but now are heading downhill.

Many of these companies simply cannot or do not want to match the pace of existing technology. They will struggle to release techology that is 2-3 years behind the current market leaders. Their excuse often will be that they want to ensure that the technology is 'mature' and 'ready' for their customers. The reality is that it is cheaper and easier for them to wait.

A number of common causes exist:

The future for such companies is generally quite bleak. This can become a very bad situation if you are depending on a company already in decline to be there for you 5 to 10 years from now.