In this report, we examine 10 of the most serious myths facing the video surveillance industry. Our analysis is based on the systematic results of our testing program that disproved these claims.

Most of you have seen megapixel comparison charts where overlayed boxes show how much more higher resolution cameras can capture than lower resolution ones. Here's an example: 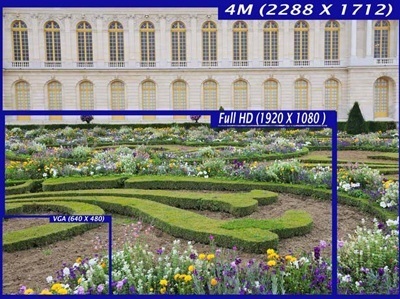 While the layout varies by vendor, this is an industry wide technique.

These resolution comparison charts are dangerously misleading because they imply that all pixels are equal.

The assumption is clear as it is wrong. While more weight often correlates with more strength, this is far from universal.

This flawed assumption is the basis of a number of other myths and might be the most serious issue our industry faces as we attempt to properly integrate megapixel surveillance.

While more pixels often delivers higher image quality, it does not always. Here are the 3 bounding factors to keep in mind:

Megapixel cameras can provide higher image quality. However, it is imperative to factor in from the start (1) what lighting variations a scene faces, (2) if the scene will be dark at any time and (3) what practical differences the cameras will make in your scene.

While it is simple to say more pixels = higher image quality, it is bound to deliver underwhelming results and disappointed users.

Based on the reasons laid out above, this myth is clearly false. Megapixel tends to be better but claiming that it is 4x or 10x better has no grounds in reality. We examined this myth in detail in our debunking of an Arecont Rep's megapixel 'calculator'.

Myth: Pixels Per Foot is a Reliable metric

The goal of pixels per foot is to provide a standard metric that can be used across cameras to guarantee image quality specifications are met. Theoretically, if a specifier states that 40 pixels per foot are needed, they can be assured whatever camera manufacturer, model or resolution is used, the image quality needs will be met. While a noble attempt, this is fundamentally flawed.

Pixels per foot (or per meter) only works based on the assumption that all pixels provide equivalent image quality. That is false and it kills the metric.

See our 'Specifying Video Surveillance Quality' Report for our full recommendations on how to use Pixel per Foot metrics and avoid the dangerous consequences of this myth.

In our tests, including a focused WDR study, an absolute difference clearly exists in camera's WDR performance that makes a material impact on image details captured. However, no easy way exists to determine this based on WDR specifications claim. Either keep track of our ongoing WDR scene tests or test yourself.

Most experienced surveillance professionals know this: Minimum illumination specifications can NOT be trusted. Really, just throw these numbers out the window.

Despite this, RFPs continue to base product selection on these self-reported specifications (e.g., camera must have a minimum illumination of .00001 lux). Because of this, and in fairness to manufacturers, it is a stupid game they all have to play. If one company was 'honest', they'd lose a lot of deals.

Review our 'Surveillance Camera RFP Specification Template' for guidance on how to properly overcome these issues with WDR and minimum illumination specifications.

We often hear integrators, even experience ones, talk about certain manufacturers having the 'best' low light performance. Almost universally the manufacturer they praise is one who defaults to using a digital slow shutter.

Shutters control how much light a camera capture. A 'standard' shutter in surveillance is typically 1/30s. However, if you open the shutter longer, you capture more light. For example, a camera with a 1/6s maximum exposure (like most Axis cameras) take in 5 times the amount of light as one that uses a more 'standard' 1/30s.

While we certainly believe some differences in low light performance exist, be very careful that you are not being tricked into favoring a camera simply because of more aggressive shutter speed settings.

For more, see our review on 'How Exposure Impacts Video Surveillance' and 'Why Exposure Settings Need to be Standardized'.

Understandably, IR illuminator vendors want to sell more IR illuminators and bandwidth consumption does tend to spike at night (at least for certain cameras). However, there are a number of problems facing this claim:

For more, view our IR illuminator test results and our debunking of Raytec's IR savings claims.

Myth: VSaaS is Secure and Mature

Unlike the other myths in this report, this one is only promulgated by a single vendor - albeit the most powerful surveillance manufacturer in the world.

While VSaaS has potential, the limitations are significant:

We understand that convincing users that VSaaS is secure and mature is key to adoption but it's just not there. The maturity is nearly self evident but the false claims to security are a ticking time bomb.

We broke down these claims and our concerns in our Axis VSaaS Myths - Issues and Inaccuracies.

While analytic vendors have retreated from their wildly bullish claims of yesterday, the new claim is that even if analytics are not perfect, they can be good enough. The pitch goes, "If my analytics can get 80% of the bad guys, that's 80% more than what you are getting today. Sure we may miss some but you are not identifying anyone today."

For most security purposes, this is a dangerous approach that fails to deliver in practice:

Imagine trying real time facial recognition across every Wal-Mart. Even if the system was 80% accurate in identifying me, the number of times it would falsely alert again people who look like me is astronomical (given the hundreds of thousands of Wal-Mart shoppers daily and variances in lighting, camera positioning, etc.).

Can analytics be 80% accurate? Absolutely. Can it scale and meet the operational requirements of large organizations? Highly highly unlikely.

False and not close. The optical zoom capabilities of PTZ cameras provides far more coverage area than even the very best megapixel camera. We debunk this in great detail and with images from our test results in our 'Debunking of PTZ Elimination Claims.'