Access control systems can do more than lock doors. With little or no extra equipment, they can be used to track labor hours for employees too.

In this guide, we examine how access can also be used for 'Time & Attendance' including:

One of the most powerful access features is the time/date stamp associated with every event in a system.

Not only do systems log when doors open, but they also record whose credential was used to open them, typically down to the second, making them ideal for keeping track of employee attendance. These logs have even been used to solve murders and otherwise establish presence at certain times with high precision.

All functions and features of manual time clocks are present in access used with time and attendance readers. 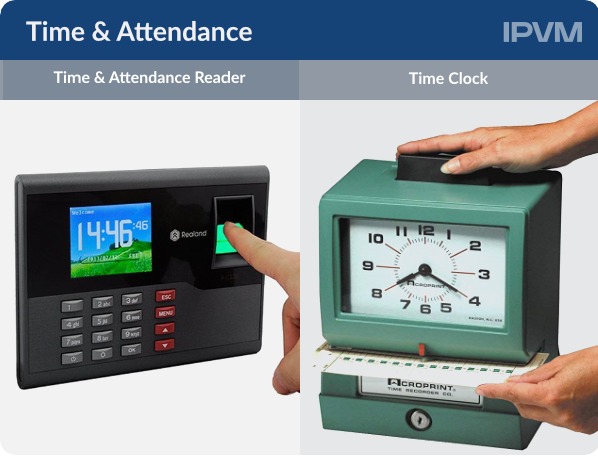 Especially when workers are paid an hourly wage, clearly establishing when they start their job and when they stop working is crucial, as that time corresponds to wages.

Using the access system for Time & Attendance often means setting aside separate readers for the sole purpose of recording 'In' and 'Out' entries in the system. Once a pay period closes, a report is created listing activity on these readers, summing the 'In' periods and subtracting the 'Out' intervals leaving an accurate record of attendance.

When access platforms tout 'time and attendance' function, this is can mean more than just generating custom reports.

Generally ''Time & Attendance' is included in the access platform, but an additional module is added for event tracking, labor classification, and payroll system integration.

The screenshot below show an example 'payroll' export screen of Time and Attendance data: 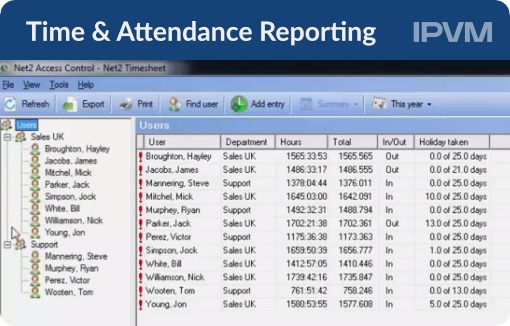 In order to avoid 'passback' (or sharing credentials), Time and Attendance readers often include biometrics like fingerprints. By requiring biometrics, the risk of employees misrepresenting themselves as another person is minimized. 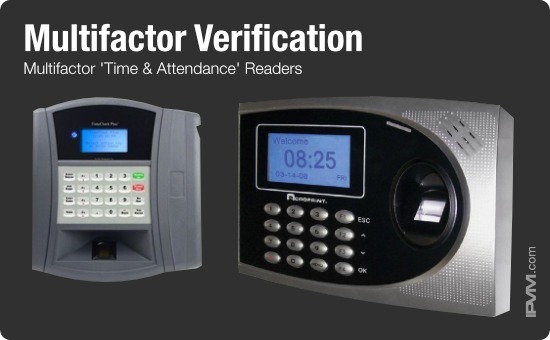 These style of readers are sometimes sold as 'standalone' time clock systems that require no access system interface, but this increases cost due to managing separate systems. When deploying them with access systems, these readers are simply another interface to collect data.

However, combining Time & Attendance with access has risks too. The three main risks to be aware of are:

For Time and Attendance, all reader time clocks must remain time synchronized, and even slight differences between access and other timepieces can create significant problems.

A number of solutions for synchronizing network time exist, such as NTP Servers and central data clocks, but system configuration must include them when time and attendance is implemented.

With combined systems, if your access control drops offline, so does your Time Clock.

When the access system falls offline, no simple solution typically exists for Time and Attendance failover and manual labor-intensive methods are often the backup.

Given the large number of doors across multiple sites, or large populations of employees in a single system, these sort of errors can be common and hard to troubleshoot.

However, it makes good business sense to use access to host 'Time and Attendance' function, including:

While a single system can be a weakness, it can also be efficient. Many facilities prioritize the upkeep of facility access systems, and issuing a credential for access also means it can be used for payroll. The investment in one facility system can be leveraged by another.

In normal use, if an employee has a security credential revoked in an access system, they immediately become invalid in the payroll system. In addition, tying the two systems together can prevent an unauthorized employee from gaining access to a 'Time In' reader before an allotted shift and help manage overtime payouts, and payroll hour allocations are enforceable by physical access controls.

Adding Time & Attendance to access is often not a big expense, and is sometimes even included in basic access systems.

In many cases, the function is added to generate custom reports that are manually uploaded into payroll systems. The image example is from Hikvision, but free versions are available in many other platforms like Dahua, ZK Teco, and Paxton:

In other cases, especially when payroll system integration is used, the cost of licensing Time & Attendance is often an extra module added to base access or per readers used as time clocks.

In general, the cost is still low and $150 - $500 license to enterprise platforms like LenelS2 and Software House.

Access Control Specification Guide on May 19, 2016
This 15 page report provides the most in-depth guidance on specifying Access...
Comments (8) : Subscribers only. Login. or Join.