The U.S. has one of the highest crime rates in the world. Within the U.S., Baltimore is one of the worst and its need for security and surveillance is particularly acute. IPVM recently participated in a tour of the city's command center during Secured Cities. In this note, we examine the system and some of the more unrealistic claims made.

Baltimore named the system 'Citiwatch [link no longer available].' The system monitors 635 cameras, up from 50 in 2006. It integrates cameras from Maryland Departments of Transportation, Emergency Management and Homeland Security among other agencies.

Baltimore officials noted that in 2012 Citiwatch:

The City of Baltimore's surveillance operators can view TV news feeds, social media streams and surveillance images simultaneously using a Vidsys PSIM. They coordinate with police on the ground and other agencies via radio and provide an extra set of eyes during arrests and investigations. The screen layouts were easily configurable, and there are a number of ways to call up video.

While the city did not allow photographs, the command center was about the size of two conference rooms, with one side containing a large screen monitor and a conference table and the other side had cubicles and desks for 15 to 18 operators. At that time of the tour, there were 10 operators (retired police officers) working. Shifts last for eight hours.

This is how operator stations look and here is how it looks on the big screen: 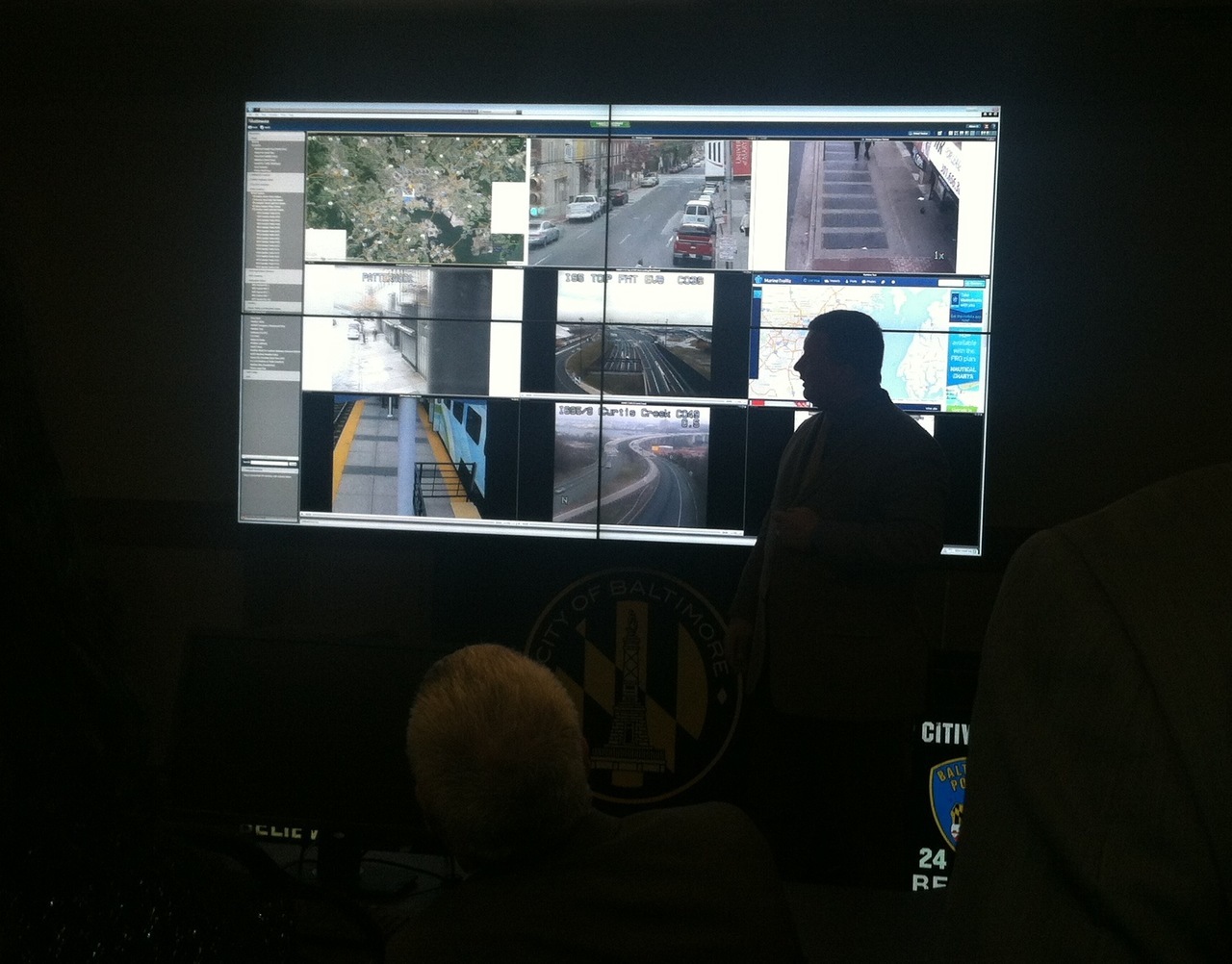 There are a few claims made by Citiwatch Director Police Lieutenant Samuel Hood during the tour that deserve some scrutiny:

In a presentation at Secured Cities the day prior to the tour, he said other agency's cameras could be called up instantaneously, but during the tour, instantaneous often meant within a couple minutes, the time it took the system access the camera with a loading icon / symbol displayed for a period of time. "Instant access" is different than "access in two minutes," especially in an emergency or responding to a live security incident.

Capturing Bullets on Camera While Recording at 30fps

The director showed an image from a shooting captured on video at night. A circle on the image highlighted what he said was a bullet frozen in time by a camera recording at 30fps. What it looked like to me was a cloud of discharge residue [link no longer available], which would be visible longer than a bullet and would linger long enough to be captured on camera. It would be an extremely lucky shot to freeze a bullet with a camera recording at 30fps, especially considering in photography it would take at least 500fps in good light to capture a clear shot of a moving baseball.

No Need For Chases

The Director said that Citiwatch has eliminated the need for police pursuits.

"If a suspect runs around a corner, we just catch up to them on the next block [with the cameras]," he said. This sounds good in theory, but having so many cameras probably helps with pursuits rather then eliminating them. Beyond that, 635 cameras for a city is far from saturated enough to ensure such continuity of coverage.

The cameras are monitored around the clock. Hood said operators will routinely alert police to crimes before dispatchers even get a 911 call. Hood did not provide any hard numbers on how many times police were dispatched based on something an operator observed, but said it happened "all the time."

He showed past surveillance video footage of various crimes from robbery to riots, but from most of the videos, there is no way to tell what initiated the operator to key in on a suspect - a call or observation.

What the videos did show however is that the operators do have some skill in detecting when a person is carrying a concealed weapon and determining suspicious activity. In one video, the operator tracked a man acting suspiciously near a row of parked cars. The operator used the camera to follow the man until he broke a car window, then had police dispatched to the location. In another video an operator notices what looks like a concealed weapon under a teen's jacket. The operator coordinates a stop with police and officers find a gun on the teen.

Caught up in the Hype

I think this goes to show that even end users can sometimes get caught up in the hype when they have an audience. Seeing the system in action was impressive, but saying it puts an end to chases and captures bullets on camera is a stretch. The Citiwatch slogan is "Believe," but hopefully people are able to take these claims with a grain of salt.

No Information on Coordination

The tour focused on the functionality of a PSIM once it was already in place and little about what it took to set it up. The project took coordination with a number of agencies including the Maryland Departments of Transportation, Emergency Management and Homeland Security, who are all using different systems, but accessible through Citiwatch. A good follow-up to the presentation would be an information session on facilitating collaboration between the agencies, which probably had unique challenges as well.