We tested in a large outdoor level field, overviewed below: 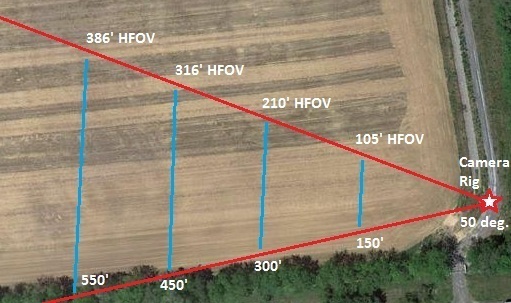 The DRS was selected because it is the least expensive thermal IP camera on the market while the Axis and Bosch were chosen do to their strong performances in previous low light shootouts (see the Q1602 test and the MP low light shootout).

The following scenarios were tested:

With this approach, we could determine not only what was 'best' in low light but what tradeoffs existed during the rest of the day.

Conclusion: For long range, very dark conditions, a top low light SD D/N camera may be viable but only if used in slow shutter mode, recognizing the limitations of slow shutter. However, since a thermal camera only captures 'blobs' anyway, the comparable loss of a D/N with slow shutter is minimal.

Future Test: In December, we will do a shootout using add on IR illuminators to compare performance.

In the daytime, not surprisingly, even at 150', both SD and HD delivered significantly more details: 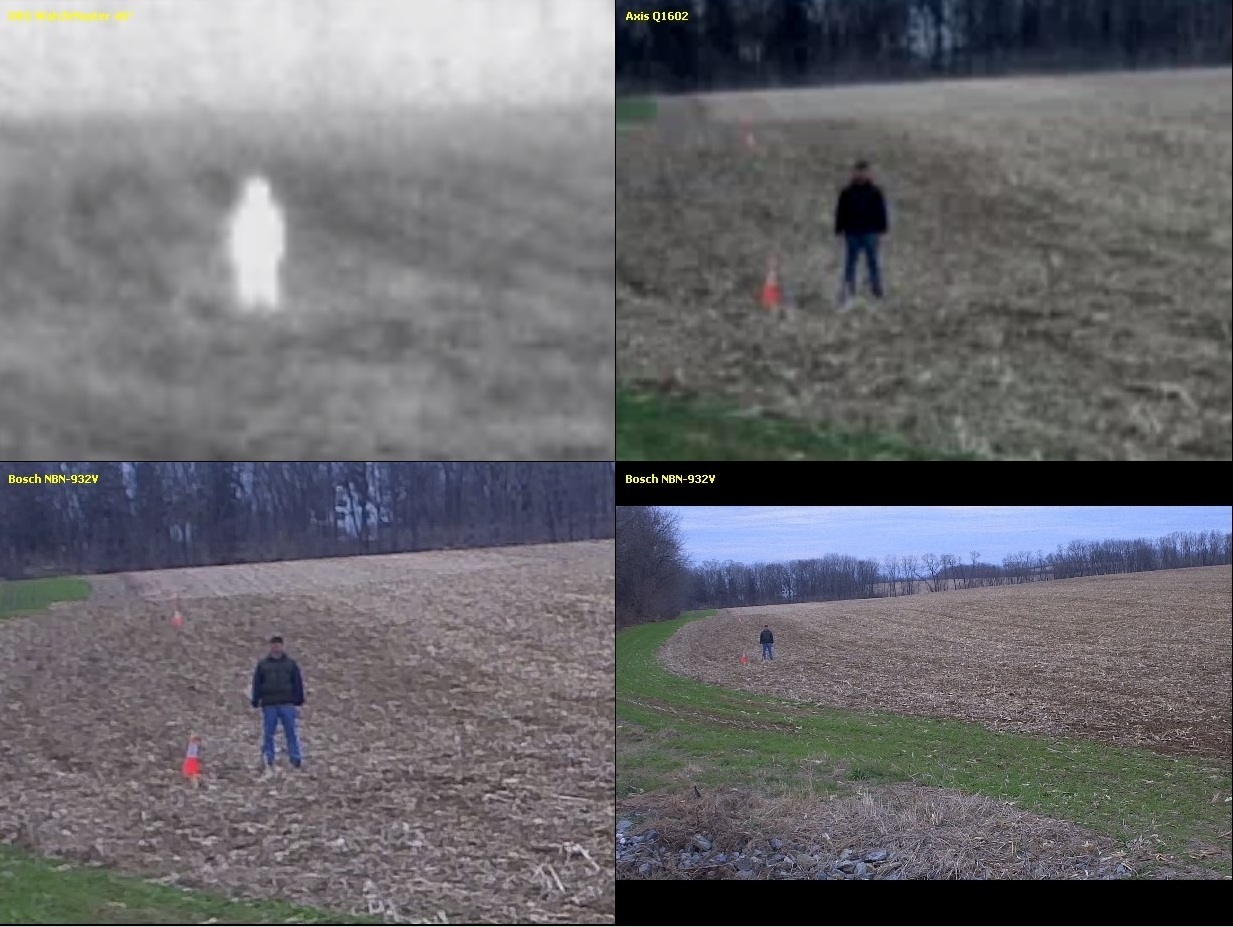 Thermal's relative performance improves at 300' as the color images get less detailed: 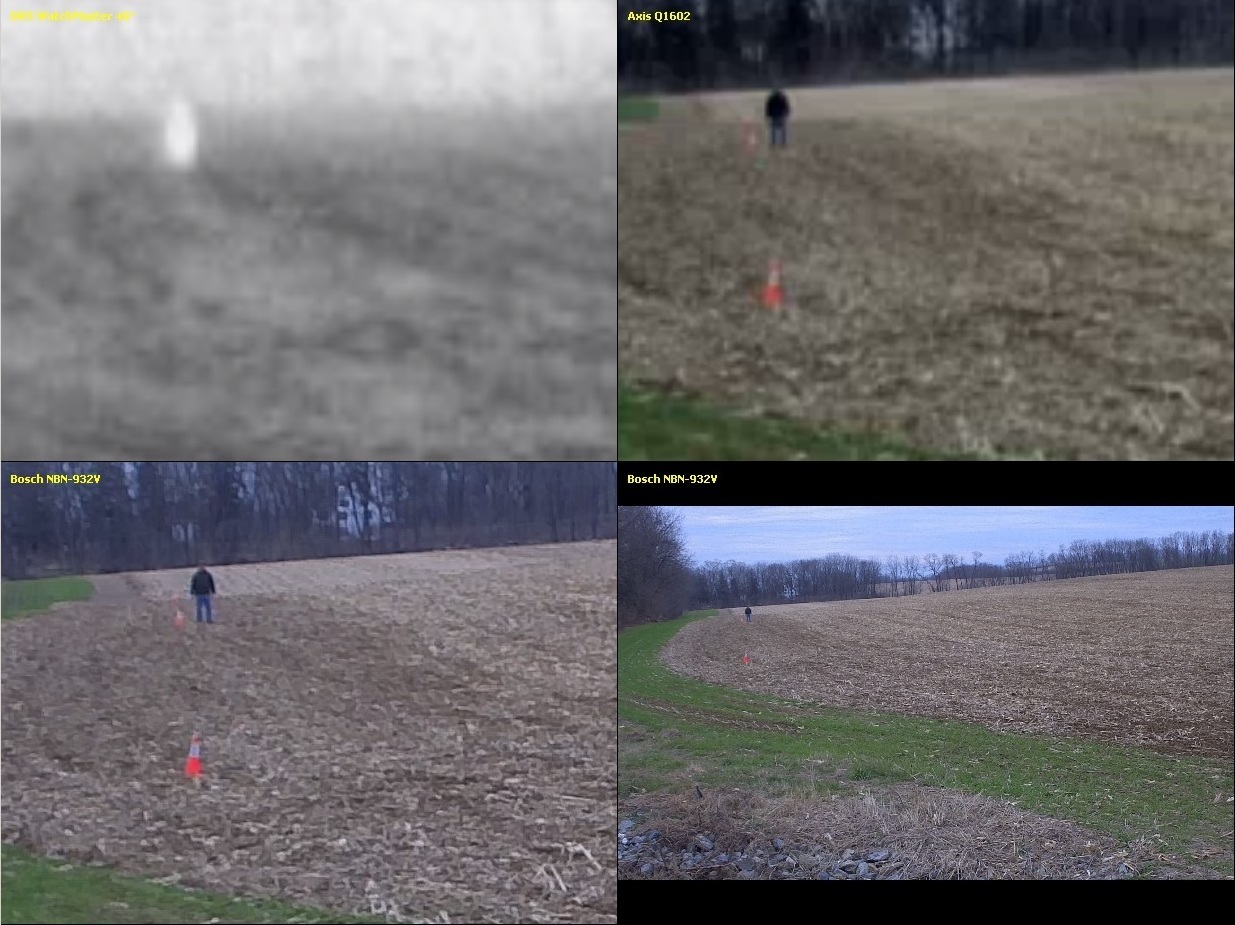 Increasing the distance to 450', 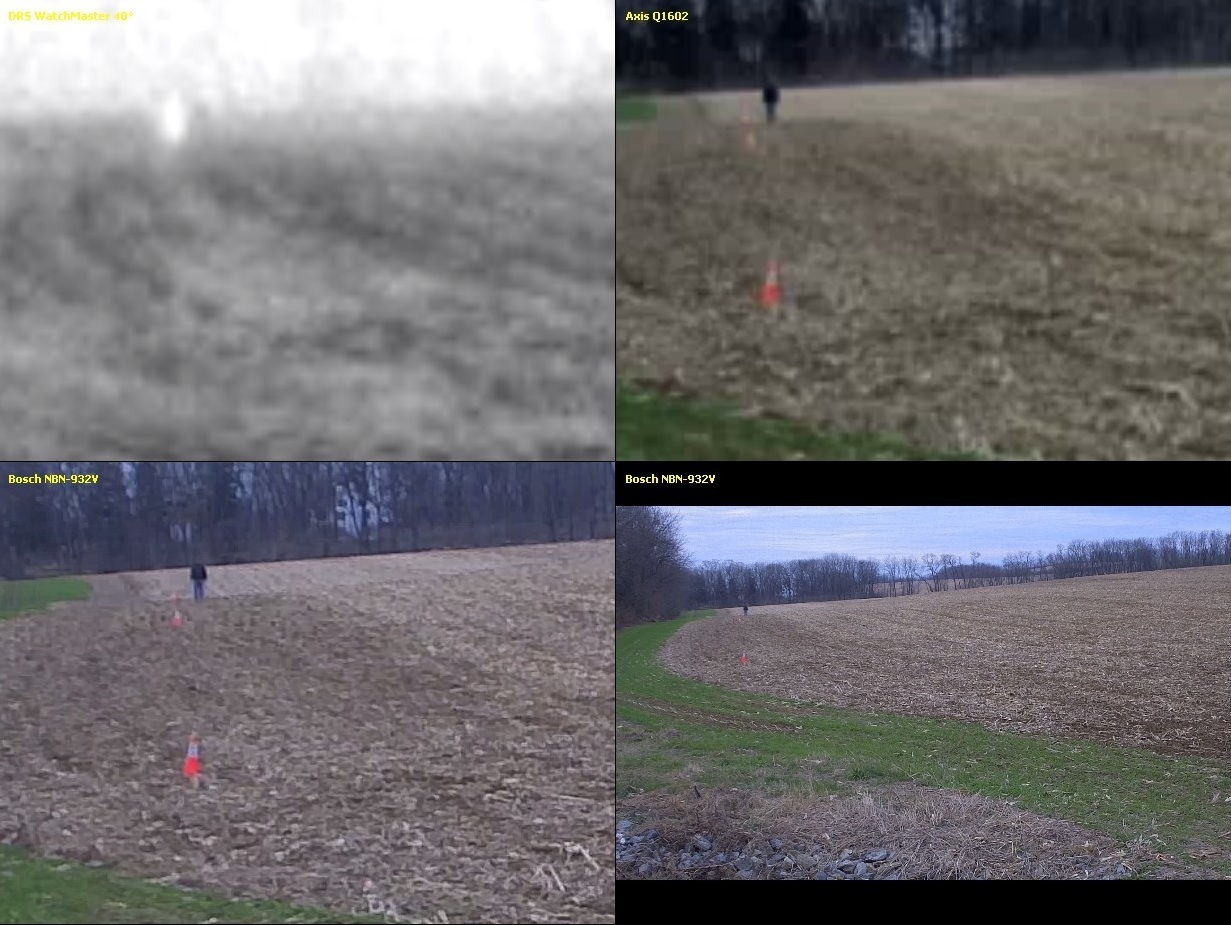 Finally, at 550', while the subject is hard to see with both the thermal and the SD, the 1080p camera shows the subject fairly clearly - a certain advantage for HD. 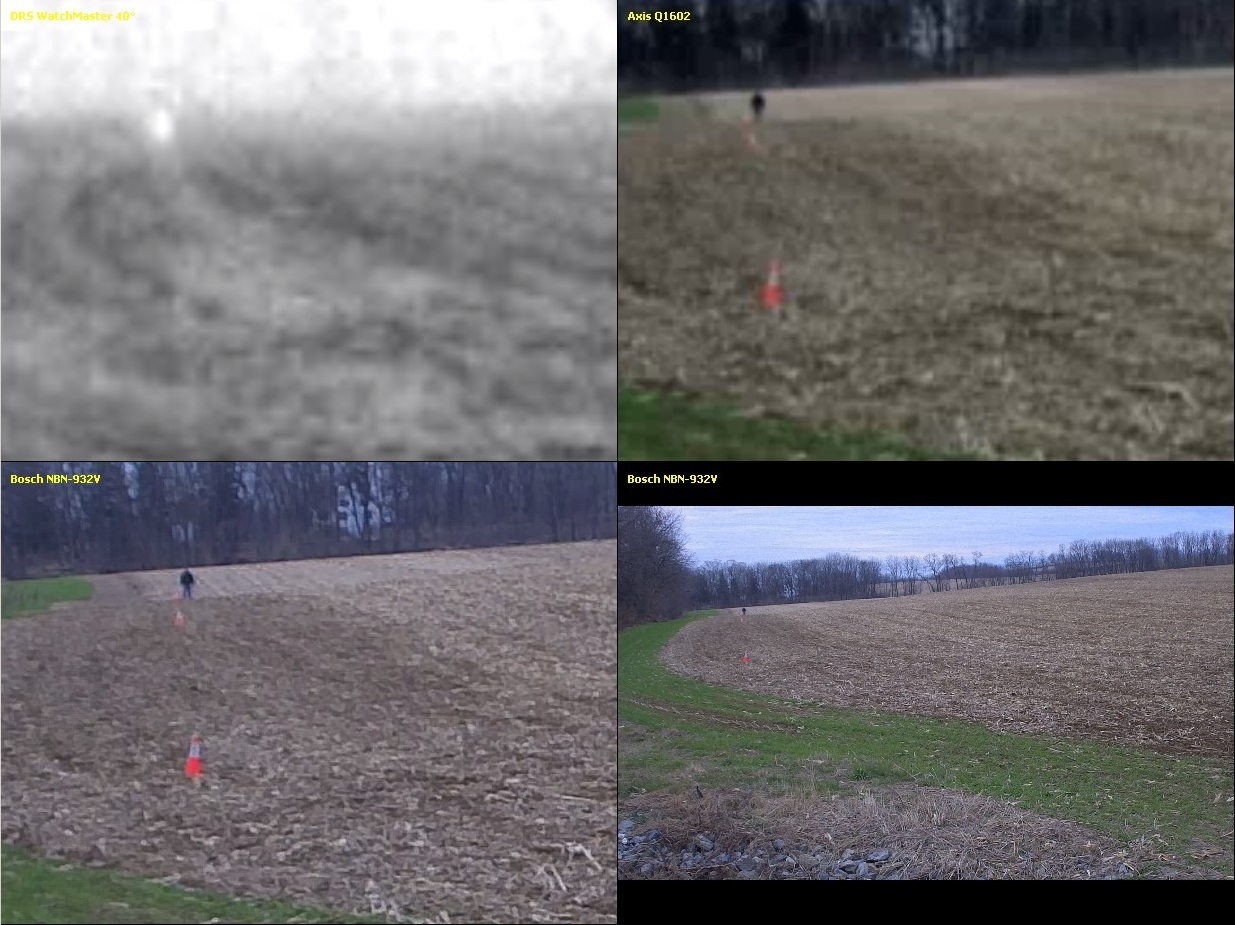 After the sun went down, we tested the cameras using the same default settings: 1/30s shutter speed, with automatic switch to monochrome mode. This scene is approximately ~0.1 lux.

In all of these scenes, the 1080p camera did not deliver usable image even though the one used (Bosch) was the best performing 1080p low light camera we have tested so far.

At 150', the thermal camera shows the subject brightly and clear while the SD struggles to make out an outline. 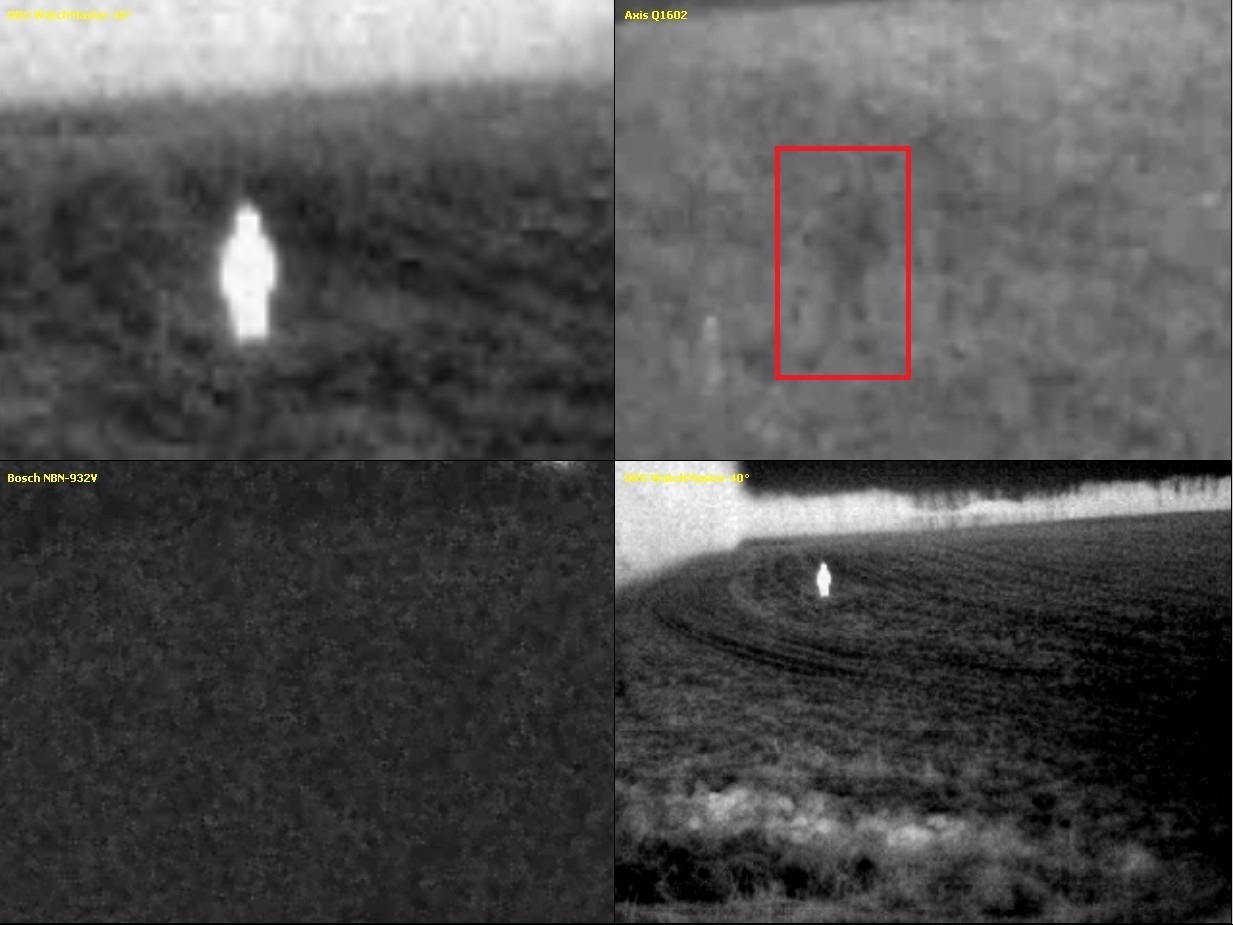 At 300' the pattern continues: 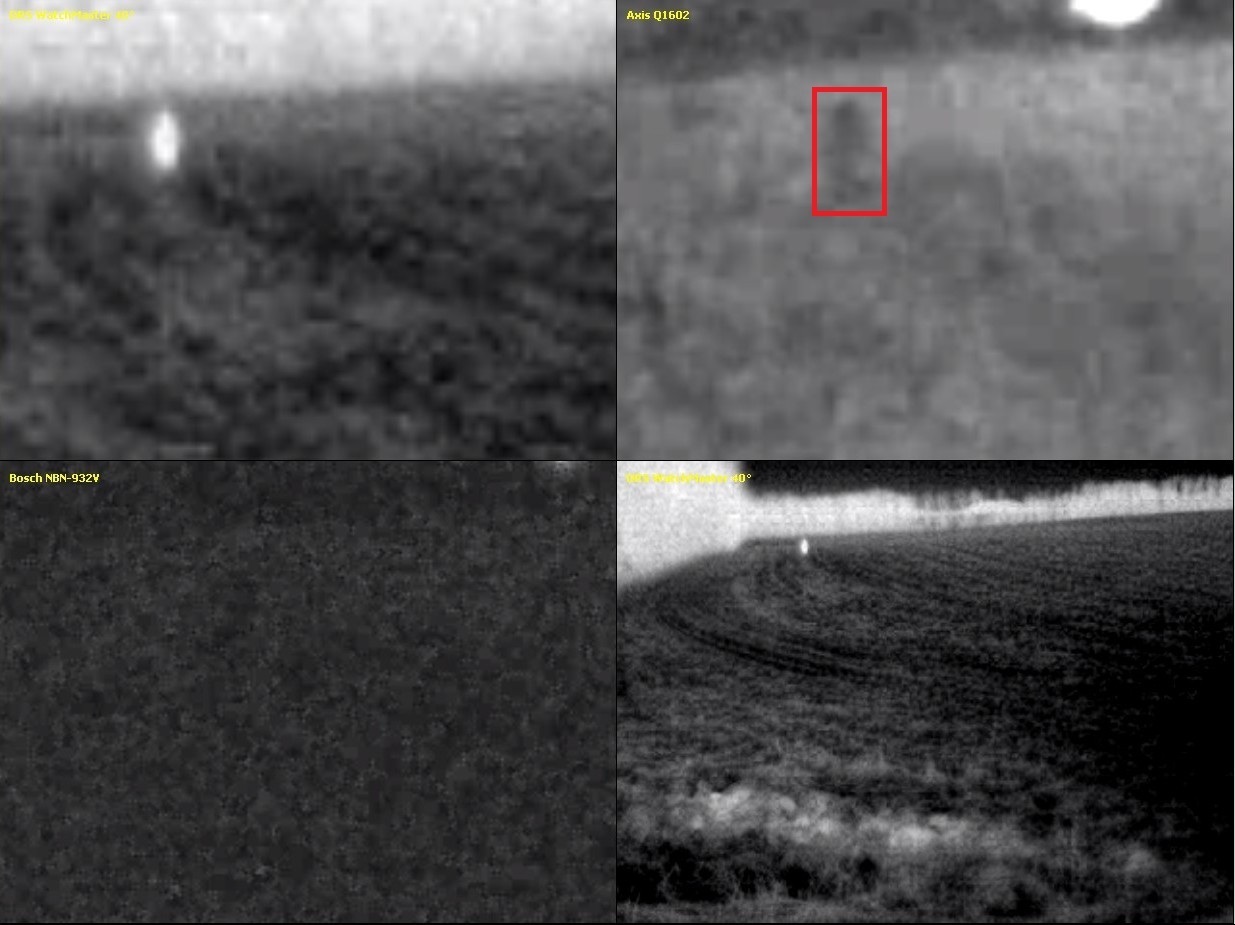 At 450', it gets harder to make out the subject on thermal but still fairly obvious. By comparison, with the SD, it's nearly impossible. 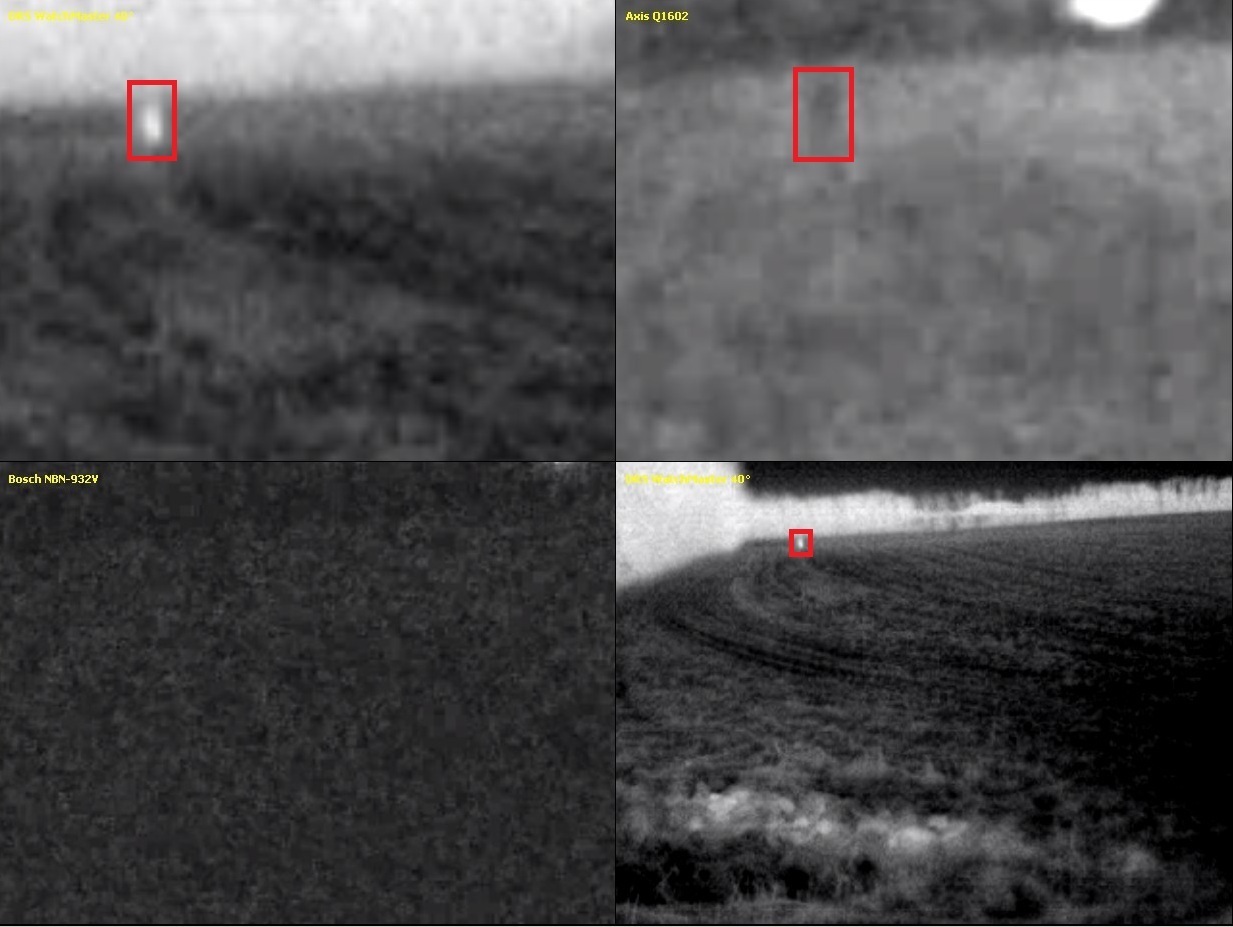 Finally here's 550' with the trend continued: 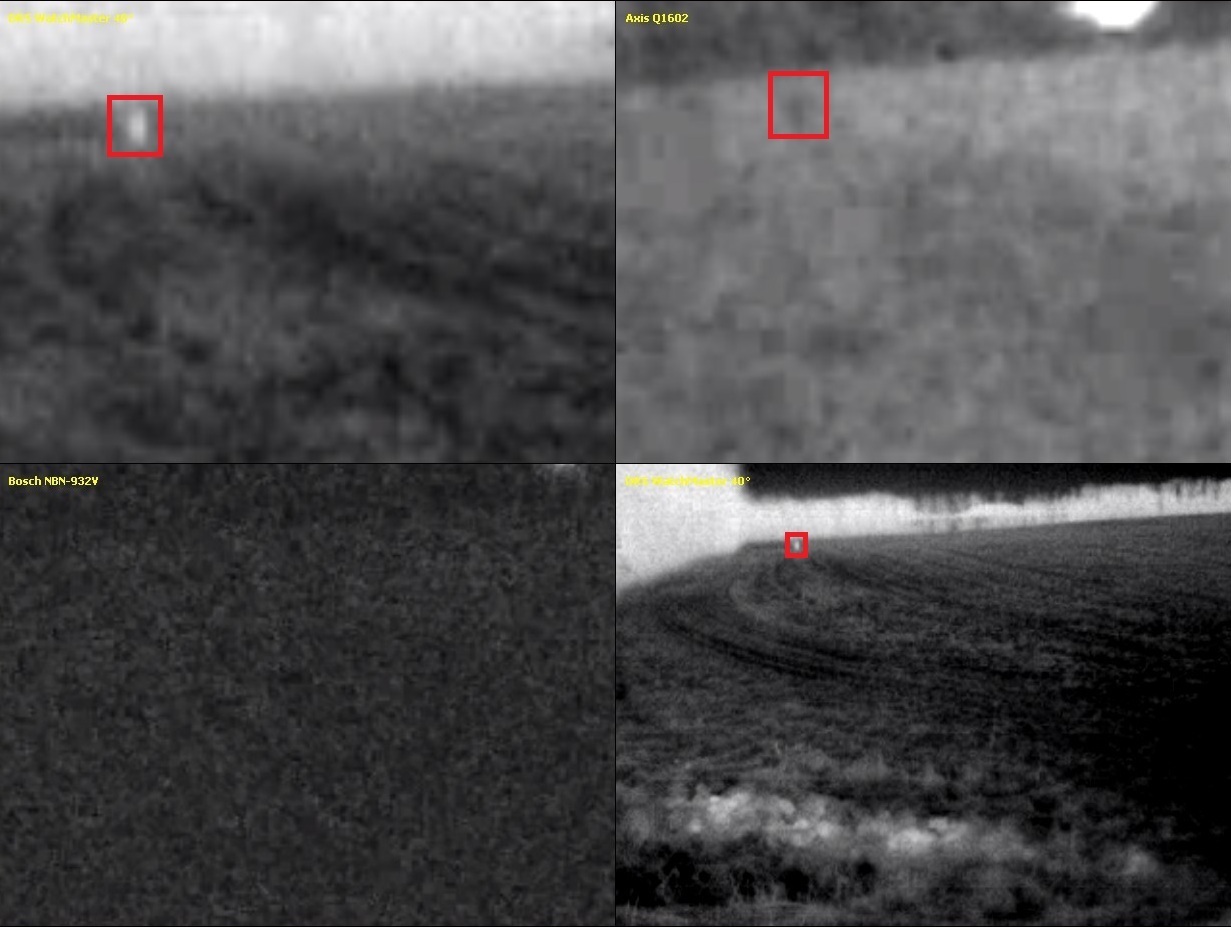 We also tried it with color mode on for the SD and black hot for thermal but results were roughly the same. 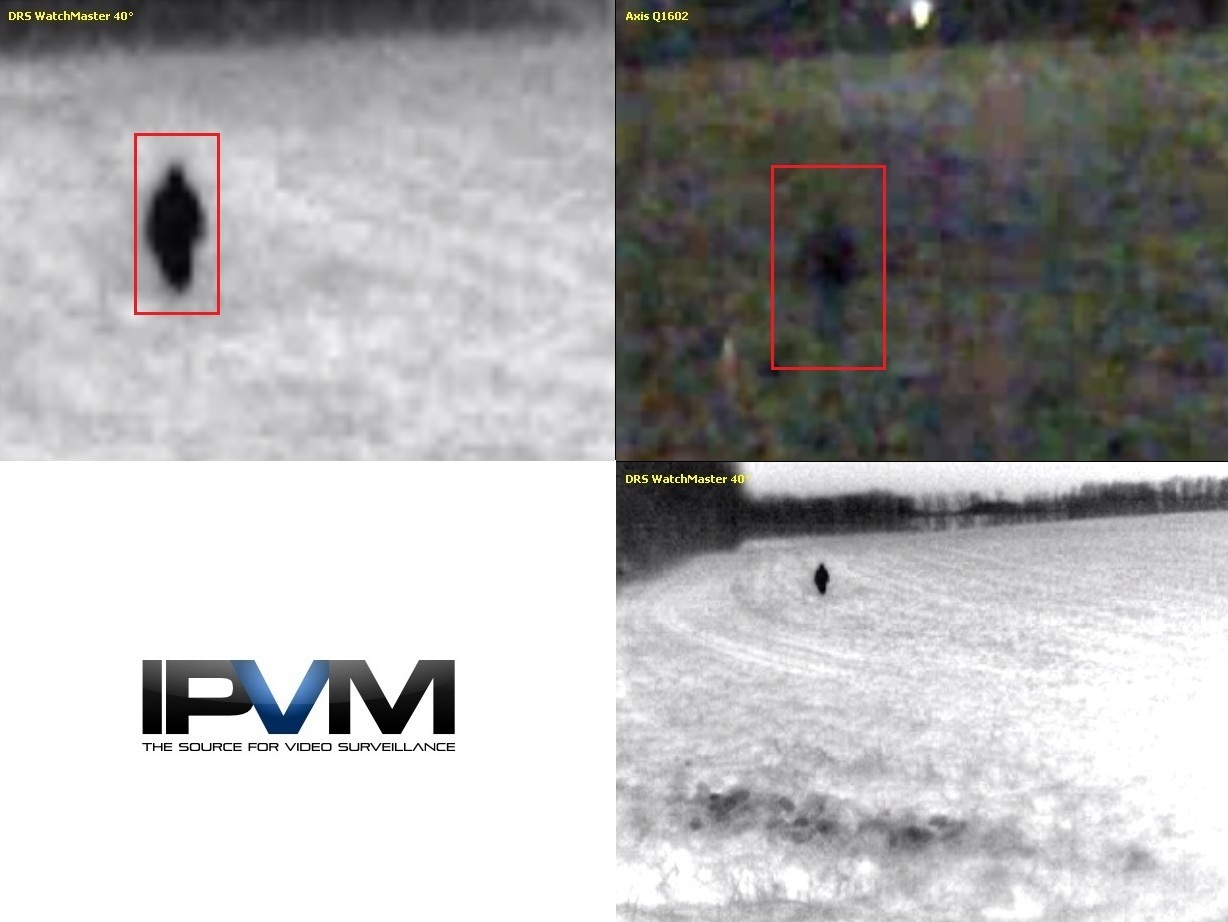 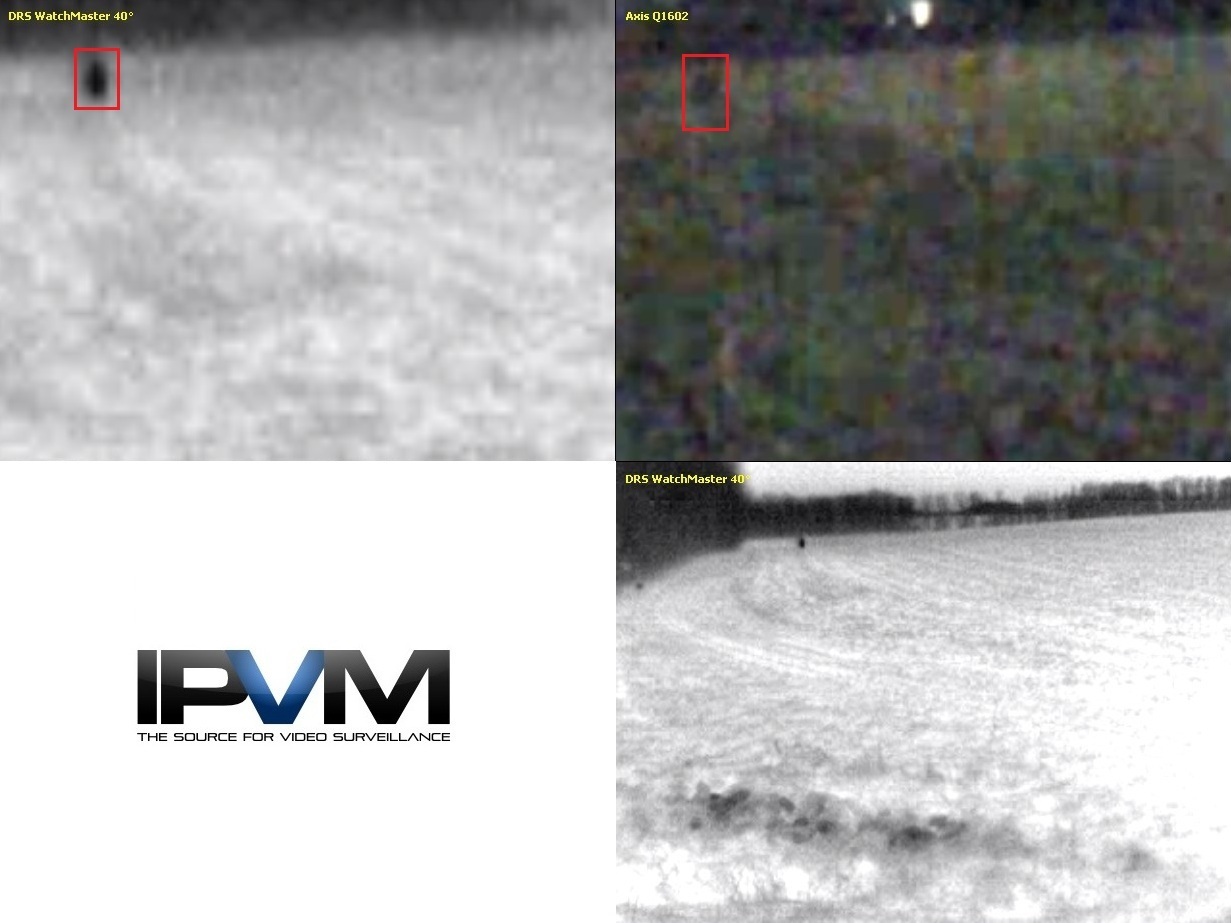 Finally, we tried using a slow shutter to see the tradeoffs. Interestingly, a 1/2s slow shutter on the Axis Q1602 hardly delivered any improvements over a 1/30s shutter. 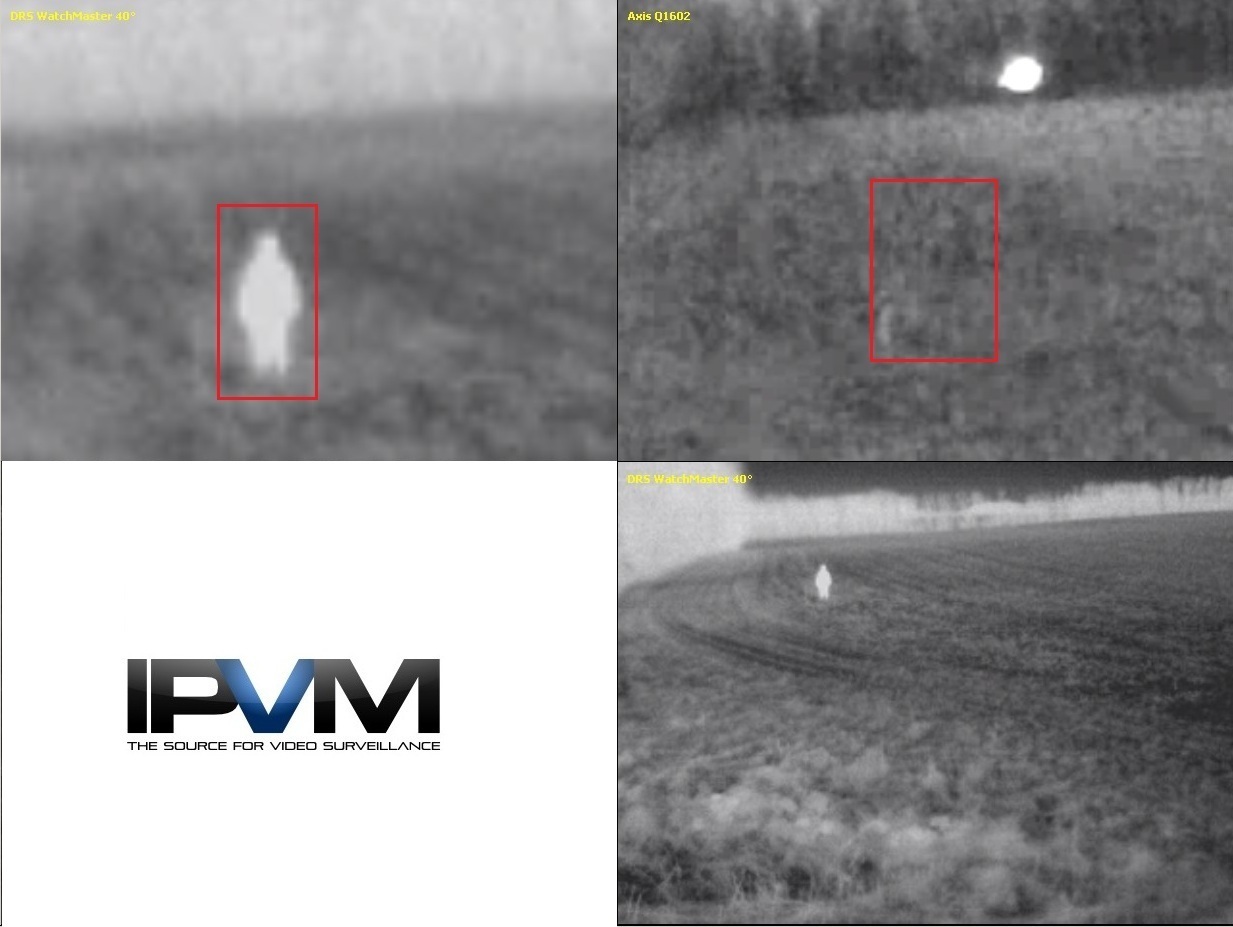 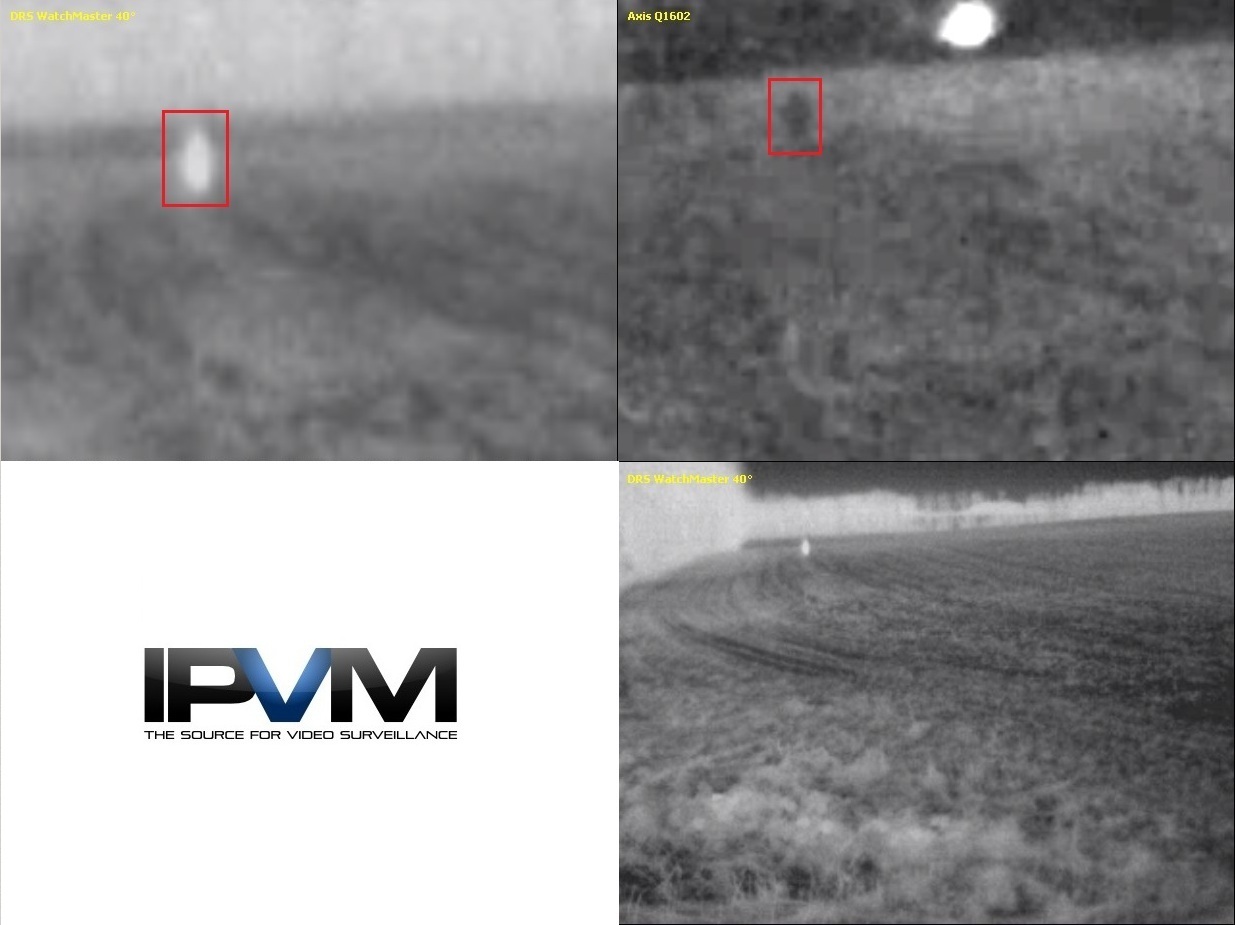 Though slow shutter in monochrome mode provided little improvement, forcing the camera into color mode with a 1/2s exposure greatly brightened the scene, almost to where it felt like we were looking at a daytime image. However, our subject became extremely blurry when in motion, making our subject indistinguishable, even at close range. The improvement in brightness and this ghosting can be seen in this image:

For strict detection, however, this setting does much to bring the Q1602 on par with the DRS thermal. Objects are much easier to distinguish, as they're now shown as colors against the neutral background, instead of simply greyscale. This is evident at all ranges: 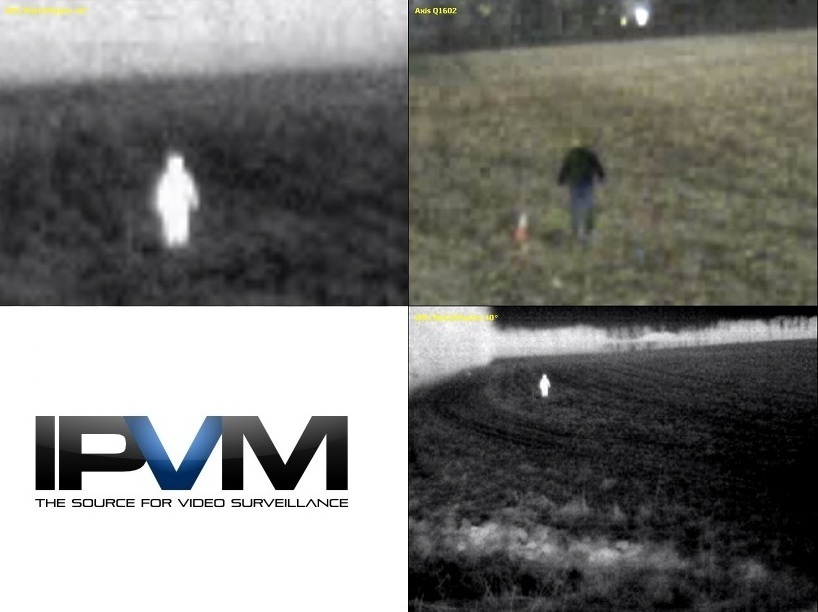 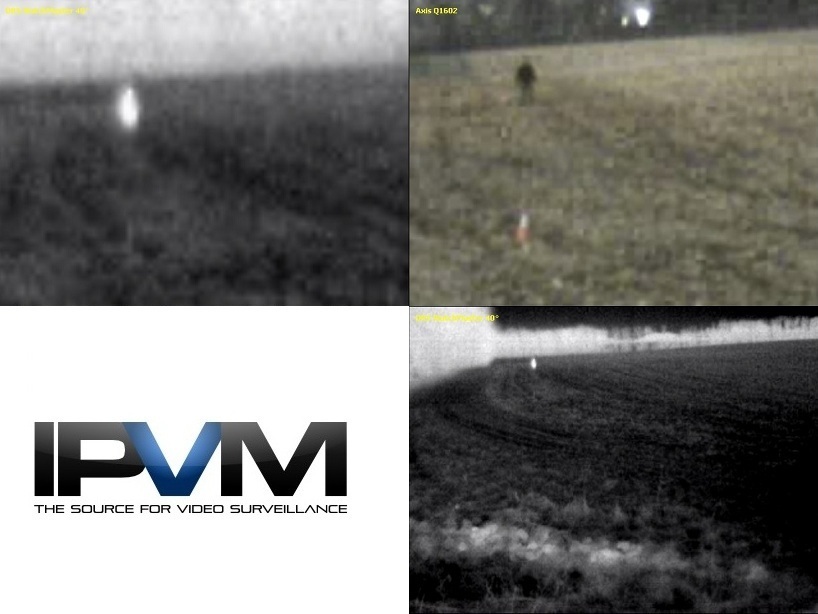 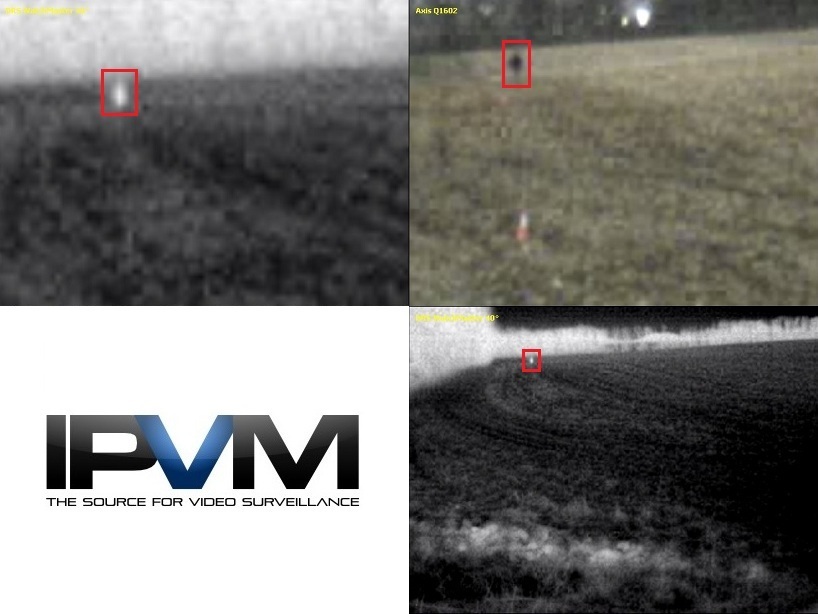 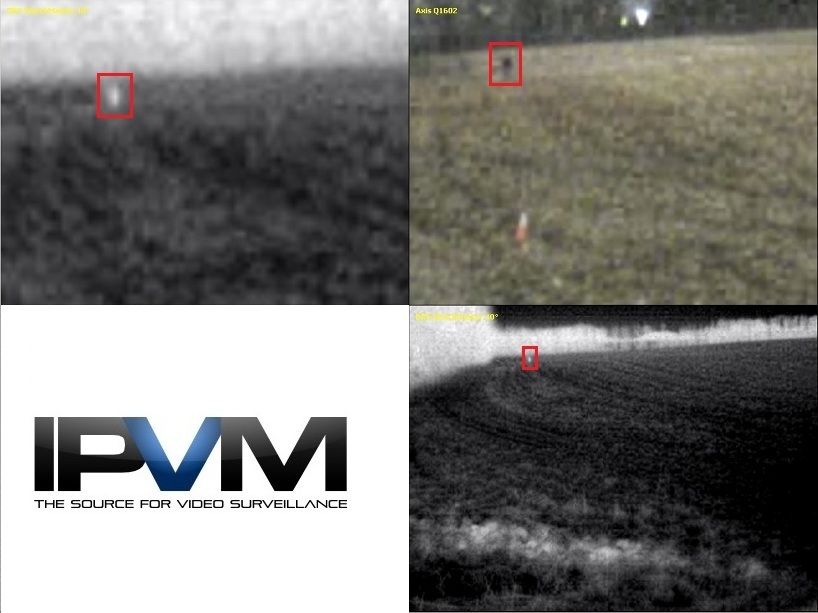 At 1/2s shutter, the image delivered of a standing (or slow moving person) is essentially a tie. However, clear tradeoffs / risks exist with putting an SD camera at such a slow shutter:

Watch the clips for yourself: