While Axis and FLIR have loudly proclaimed steep drops in thermal network camera pricing, their cameras are still at least $3,000 and most are far more expensive. Now, a newer entrant to the security market, DRS Technologies [link no longer available], has radically slashed pricing, offering similar cameras for less than $2,000. In this note, we examine who this company is, whether they are for real and what catches or limitations you may face.

The sub $2,000 pricing is for that existing line, with no functional changes in the product offering.

DRS has been promoting this in trade magazines with the following excerpted ad: 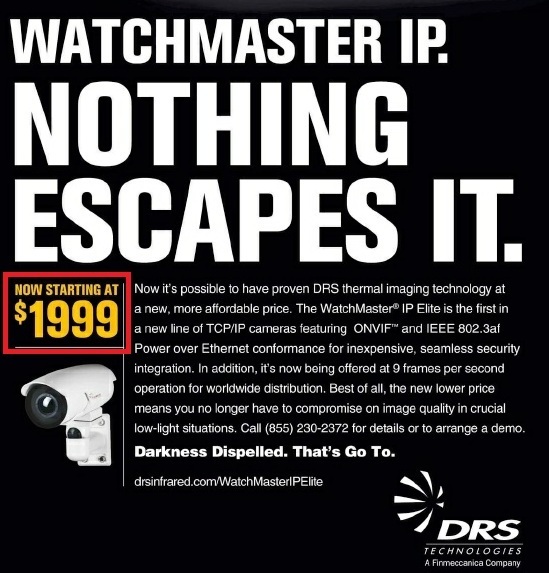 An interesting question is how DRS can drop their prices so steeply on an existing product. DRS says that since they manufacturer their own components, they have more price control than competiors using OEMs and more opportunity for economies of scale. However, given the depth of the drop, we believe that DRS must also be accepting lower margins to drive market share growth.

The key features of the WatchMaster IP Elite include:

It is available now, starting at $1,999 USD MSRP with a 40º lens. Given approximate discounts (between traditional security dealer discounts and lighter IT-type discounts), street price may be slightly lower. DRS sells through integrators only, with no direct sales nor distribution.

Given DRS' unknown brand in surveillance, and extremely aggressive pricing, users should consider the following potential areas of concern:

The WatchMaster IP Elite is substantially less expensive than key IP thermal competitors, such as Axis and FLIR. Given $2,000 USD as an approximate street price, it compares as follows:

Given these prices, the WatchMaster is less than half the price of competitors.

No Video Analytics: Unlike Axis, however, DRS' cameras are not capable of running analytics on-board, only motion detection. This is an important limitation as analytics are often run with thermal cameras. While DRS can support analytics, it needs to be done on the server side, increasing cost and complexity.

Instead of thermal, IR illumination is often used with visible light cameras. There are two options in this case:

No matter which form of IR is used, thermal cameras have an advantage in fog or inclement weather, as well, as they are better able to ignore these effects.

However, thermal cameras means giving up high resolution daytime color images, a major barrier for many users. One could complement these lower cost thermal cameras with a standard megapixel cameras at a modest increase in cost to rectify this shortcoming.