When many think of thermal cameras, they visualize their use in movies and TV, with a multi-colored science fiction color scheme, familiar to anyone who's seen 1987's Predator: 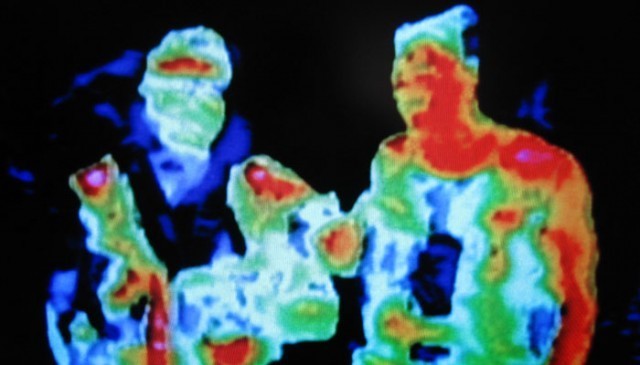 Indeed, some manufacturers offer more than a dozen palette options in their cameras. The question is: are these color schemes actually useful in surveillance applications? In order to show the differences between these options, we examine the typical palettes used in thermal surveillance, and potential for lesser-used palettes.

The most common palette used in thermal cameras, generally the default setting, is "white hot", in which warm objects appear as lighter shades of grey, and cooler objects appear darker. "Black hot" is an inverted version of this scheme, still greyscale, with warm objects on the black end of the scale. This scheme is available in most thermal camera models. These two schemes may also be referred to as simply "greyscale" and "inverted."

This image shows our subject in the same scene using white hot and black hot palettes (click for larger version):

And again, at approximately 620', very little difference in detail can be seen.

These two palettes essentially show the same amount of detail, with neither truly besting the other. However, we see two key factors which affect the decision of which to use:

Some manufacturers offer a color mode called "ice and fire" which may be useful where other color modes are not. Essentially, this mode is the same as white hot, but instead of displaying the hottest object in the scene as white, red is used, and blue is used for the coolest. In theory, this could serve to increase visibility, since warm red objects against a greyscale background should be easier to spot than brighter shades of grey/white. However, in practice, hot objects to not always display as red, and cool objects do not always display as blue.

For example, in this image, our subject was by far the warmest object in the scene. The outside temperature was around 35° F, and the SUV had not been moved from this spot during the day, making it quite cool. Additionally, he is clearly visible and prominent in the FOV. However, the camera at no point displayed any part of him as red while in ice and fire mode: 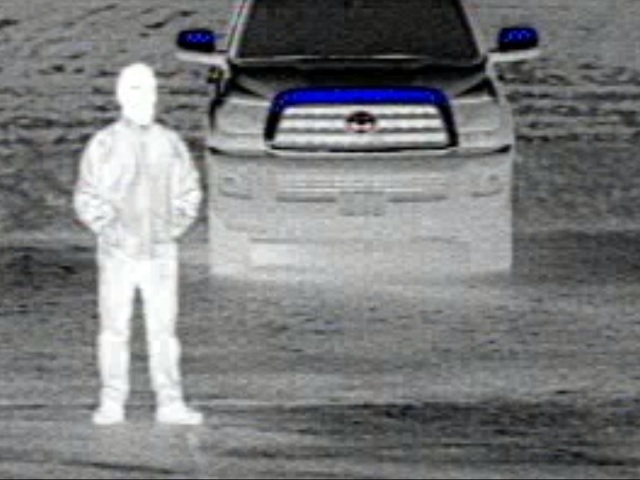 This is not unique to one manufacturer of camera, either. In other tests, warm objects have failed to display as anything other than greyscale on multiple manufacturers' cameras. If ice and fire were configurable, with users able to adjust what objects triggered as red, we believe it would be a truly useful color mode for thermal surveillance, but this is not currently the case.

In security, the main purpose of thermal cameras is simply detection, since fewer details are provided than when using visible cameras. In other applications, however, detecting and displaying minute variations in temperature may be desired. In these cases, colored palettes are far more common, since the full spectrum of color may more easily display a wide variety of temperatures than when using greyscale images. For security purposes, colored palettes may quickly become tiresome for operators to monitor, and thus may actually obscure detail across a larger field of view.

This image shows some examples of colored palettes compared to white hot and black hot images in the same scene (click for larger version): 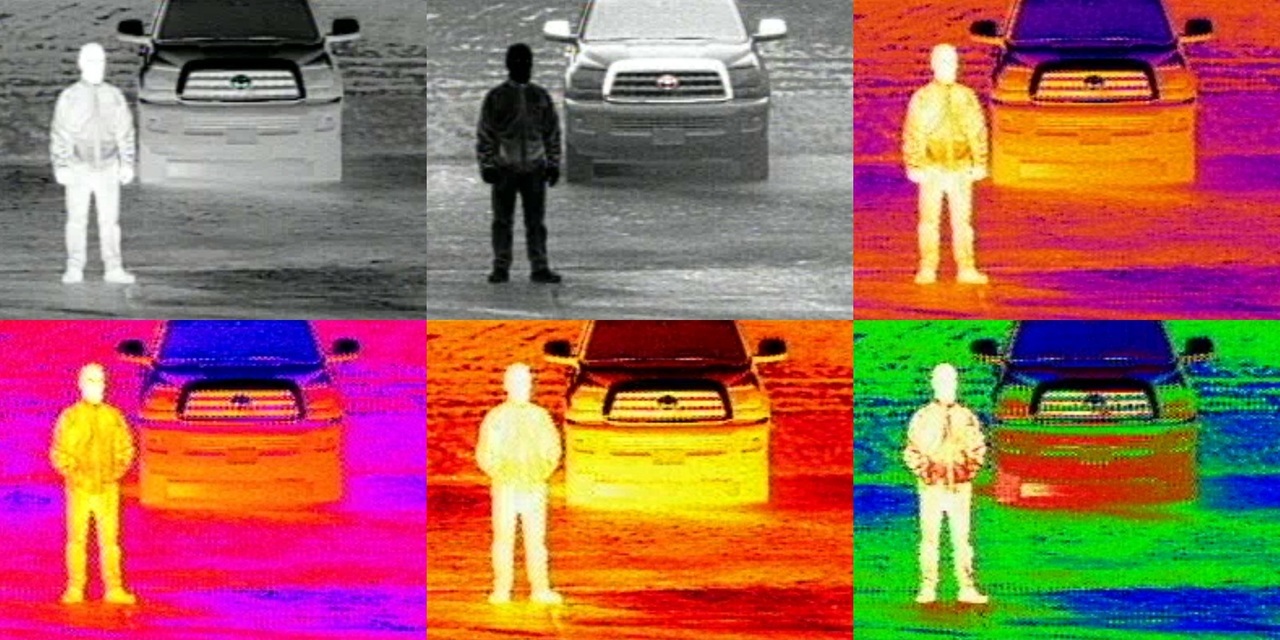 For surveillance purposes, we see white hot, black hot, and ice and fire (with qualification) as the only viable palettes. We have seen no advantage to using colored palettes when using thermal cameras, and potentially some decrease in visibility and increase in operator fatigue. For those choosing between white or black hot, much of the decision comes down to operator preference, with monitor setup having modest impact. For those using cameras which support ice and fire mode, we believe it is worth testing in the individual scene. If it does perform, the displaying of subjects as red against the grey background may aid in detection. At worst, if it does not perform reliably, this mode is will be no different than using standard white hot mode, with little downside.