False smoke alarms kill. When 'traditional' smoke alarms are tripped by false sources like steam or weather changed, many people resort to disabling them to prevent annoyance. Thanks to a new type of sensor, a manufacturer claims it is producing a 'smarter' detector that overcomes traditional weaknessess and alarms on more than just smoke. In this note, we examine USI's IoPhic Sensor [link no longer available], investigate the 'difference' in sensor technology, and compare the cost against traditional models.

Fundamentally, IoPhic [link no longer available] claims it is different than typical smoke detectors because it employs an unique sensor and is manufacturered using different techniques than other 'PCB' based sensors. As a result of these differences, IoPhic claims:

The 'anti-nusance alarm' claim the unit makes is especially impactful, considering the huge liability that a diabled smoke alarm represents. For example, the IoPhic sensor is able to discern between cooking smoke, humidity, and a true hazardous fire. The promotional video below describes how the sensor overcomes this problem in detail:

Unlike traditional sensors, IoPhic uses an adpative 'learning mode' program via onboard microprocessor to recalibrate and adjust alarm thresholds over time. Where other sensors can be 'tuned' to a certain location after install, they do not have the ability to adapt to environmental changes over time.

IoPhic claims its propretary smoke detection sensor is superior due to the 'smart' ion sensor it employs. Unlike 'optical' photoelectric-type sensors, ion alarms measure the ability of air to recieve ions (via a sample of radioactive 'Americium'). Clean air measures differently than 'smoky' air, and alarms when this measurement falls below a minimum threshold. The image below is a basic depiction of how the method works: 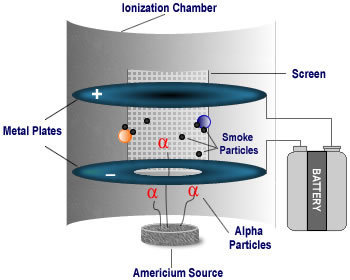 Ion sensors are especially adept at detecting 'smoldering' fires that may not generate much flame, heat, and smoke. Even slightly smoke-laden air is detected by the sensor. However, due to the extreme sensitivity of these sensors, they are often prone to false alarming due to non-smoke related changes in the surrounding air.

Given the addition of IoPhic's microprocessor and real-time signal filtering of the 'ion sensor', the alarm threshold adjusts over time and makes it less prone to 'false alarms'.

In addition to smoke detection, the unit will detect high ratios of carbon monoxide and natural gas in a building. Unlike the smoke threshold, the CO alarm threshold is fixed at a certain rate and Natural Gas leaks are detected as a change in concentration over time.

While these additional alarm sensors are commonly available, they are not commonly integrated into the same unit as the smoke alarm. Combining everything in one unit lowers total installation costs.

Unlike other ion smoke alarms, the IoPhic notifies when the sensor hits the end of its service life. Because the ion sensor is dependent on a radioactive component, the sensitivity declines over time as the sample decays.

While other sensors recommend being changed at 7 - 10 year intervals, they do not keep track of the service life. Unfortunately, a 'bad' sensor looks the same as a 'good' sensor, and the service life must be manually tracked.

IoPhic begins a timer after initially powered up, and will send an unclearable 'beep' at 30 second intervals once the service life has expired.

IoPhic is networkable to (up to 24) other IoPhic sensors, so that a 'mesh' of coverage can be created. If one sensor alarms, the rest of the alarms will simultaneously sound. This is useful in 'stand alone' residential fire/smoke detection systems that are composed of panel-less detection and notification.

However, the IoPhic is not 'out of box' addressible by commercial fire alarm panels. Unless the respective fire alarm vendor manufactures a 'universal addressing module', integrating IoPhic with commerical systems is not possible.

IoPhic is more expensive than most other 'ion' alarms. Many community outreach/public safety programs simply give away smoke detectors. If free units are not available, most units can be purchased at home improvement stores/online for under $10 each.

By comparison, the price of the IoPhic is sharply more expensive at $79 online [link no longer available]. However, given that a single IoPhic replaces up to two additional units (CO and Natural Gas), the extra cost is offset in reduced sensors to buy, install, and maintain.

In addition, IoPhic is a good fit for environments where the temperature swings and humidity shifts can bring about false alarms from traditional sensors. Other applications, like commercial kitchens or dusty storage area will benefit from the adaptive ion sensor that rules out errant readings.