Startup: The Smartest House Light Ever?

A startup has a hot home security camera that doesn't look like one. In fact, it looks like a light fixture. Because, well, it does that too. 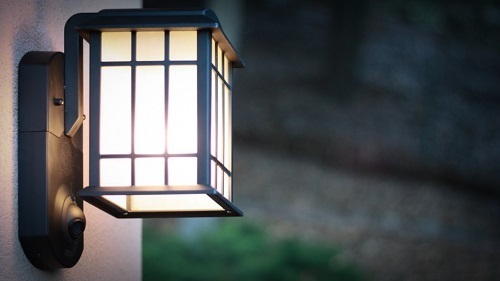 However, this camera/light combo also sends alerts when prowlers are detected, and the company claims the average DIYer can install it in a few minutes for less than $200 total.

In this note, we examine Kuna, spot where the hype may be too strong, and see what members think.

Kuna combines the deterrence of white light and combines it with a camera, siren, and 'talk-down' alarm that is wirelessly connected and managed by a smartphone app. The promo video below overviews the approach:

Kuna is designed to be a retrofit product that wires up directly to existing 120 VAC drops for common outdoor home lighting, and communicates with 'the cloud' via existing home wireless internet routers. Local light (On/Off) controls as well as video feeds and local audio can be controlled by the app.

We see a number of potential issues:

(Not really) Weather Rated: For an outdoor device, Kuna only carries an IP44 rating, which offers provisional protection against indirect water splashes. However, even moderately exposed locations are subject to more abuse, and other similar residential outdoor electrical devices often carry a more stringent IP54 rating at a minimum. The low rating is better than no rating, but still leaves a big performance gap in what a typical unit could actually see in use.

Swarming Bugs: Real-life deployment often reveals how troubling insects can be for cameras simply hung near a light, much less one built in. While Kuna claims it's onboard motion detection is tunable to avoid false alarms, the impact of swarming bugs on both accuracy and image quality is still undetermined.

Limited Camera: Kuna comes with a 720p HD camera and a 116 degree fixed FoV. However, the camera cannot be aimed or zoomed. Also, if the lightbulb is burned out, untriggered by the integrated PIR, or intense enough to reach the area of interest, the camera will likely deliver poor image quality (no IR, high f number). While Kuna's camera is likely sufficient for general surveillance in a wide FoV, homeowners with 'CSI Dreams' of highly detailed faces are likely going to be disappointed.

No Backup Power: Unlike many residential surveillance systems that can add a USB for backup power, Kuna is tied directly into a 120VAC light circuit. While not impossible, fixing backup power to high voltage circuits is costly (generator or otherwise) and not likely to happen only for the sake of Kuna.

Not Shipping Yet: While Kuna appears close to shipping, crowdfunded products have a miserable reputation for being late, being buggy, and over promising performance. Kuna is backed by a reputable incubator and has an experienced leadership team, but that alone is no guarantee that product will ship on-time and perform as promised.

Kuna is not the first product combining a house light with a camera. A similar product called NightWatcher has been available for several years, with a PTZ CIF camera and lamp head for ~$150. However, that particular product has a rather poor quality reputation (only a 3-star average rating) with many reports of DOA, and the camera is not networked at all.

Nightwatcher relies entirely on users to notice when the light comes on as the prime method of alarming. Any video collected by the camera must manually be downloaded from the light or included SD card.

By choosing to connect to WiFi, cloud servers, and smartphones, Kuna has a big advantage of alerting users when the device actually detects movement.

So the question is: What do you think? Please vote in the poll below:

IP Cameras Inside Light Bulbs: A New Market? on Jan 07, 2015
Poor lighting is a common problem for video surveillance. To solve this, a...
Comments (11) : Subscribers only. Login. or Join.