Personal safety is a growing concern for many, but a complete solution means carrying several devices: a pepper spray can, siren, and then fumbling with a phone to call the police can all be very difficult when confronted by an attacker.

A startup claims their device simplifies everything into a single unit: Defender. Now, the company has raised $100,000 in its first day on sale. We look at the details and positioning of this product inside.

Defender is a wand-shaped personal safety tool that combines a siren, a still camera, a pepper spray gun, and a blue-tooth connection to a smartphone that communicates in real time with a central station.

The company's short concept and product demo video is worth watch to get an idea of how the product is used:

The Defender is meant to be carried in lieu of other 'less-than-lethal' / notification devices like a taser, pepper spray, or rape whistle. The unit is small (measuring less than 8" long and weighing just a few ounces) and is intended to be carried at the ready in the hands of joggers and those walking into risky areas. Featuring one trigger button, when pressed Defender activates the following items: 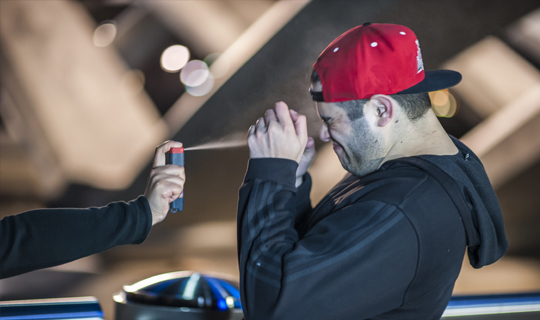 The most useful feature of the device is that it acts as a PERS beacon that communicates with Defender's own central station. The unit automatically signals this station when used, and the operators can view the images collected by the wand and dispatch police, medical, or other nearby responders to the event.

However, the device cannot do this on its own, and must be paired with an app-enabled smartphone to relay out signals.  This means the user must also carry a cellphone in addition to the wand although it can be tucked into a running sleeve or a pocket. Alarms transmit GPS locations collected by the phone to steer responders to the event.

If a user does not own or normally carry a smartphone, the Defender will not be much benefit over traditional self-defense items: 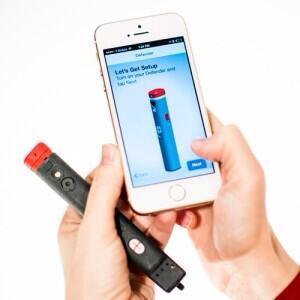 Pre-production costs are ~$180 for one Defender and one year of service. Pricing varies based on color selection (a white unit cost $20 more), and volume discounting for multiples (two units cost ~$150 each with one year service.)

Defender pins monitoring costs at "less than 50 cents per day" for monitoring service being offered, amounting to about $15 per month per device.

Indeed, the company is already seeking large-scale retail distributors in pre-promotional campaign videos, with the offer of deep discounts off list pricing to those who buy in bulk.

Defender appears to be a smart concept that could indeed offer advantages over existing personal defense products. A number of features are all integrated into a single device and triggered simultaneously when needed.  Instead of fumbling around with multiple units, the user only carries a single device in one hand.

Will it succeed? It is certainly worth tracking to see how they develop over the next year or two.

Apparently, at least two $25,000 minimum 'strategic partners' have stepped forward, as this initial windfall includes at least $60,000 for that particular 'Perk".

The New Generation of Crowdfunded Security Startups on Sep 02, 2014
New entrants to the security market are few and far between. However, there...
Comments (23) : Members only. Login. or Join.