Not even a decade ago, Dedicated Micros was one of the biggest manufacturers in the video surveillance industry. At their peak, the company did ~$135 million USD, a number that none of even today's largest VMS / NVR manufacturers have reached.

Since then, the decline has been continuous and incredibly steep.

In this note, we review Dedicated Micros' financials and why they have fallen so far.

Since 2006, Dedicated Micros' revenue has plunged 66% while the overall video surveillance market has grown 100%+. 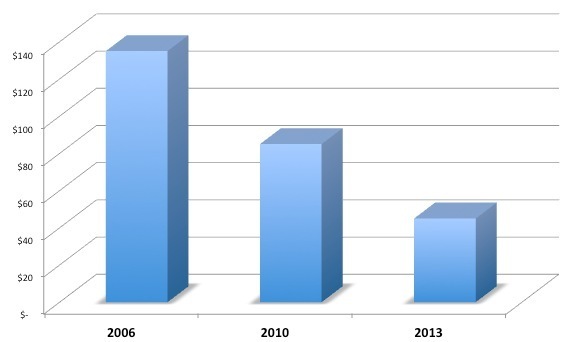 By contrast, even if Dedicated Micros had grown at an industry pedestrian 10% average growth rate over that time period, they would / should have been generating $260+ million USD today.

The company's revenue has consistently declined, with the most recent year being one of the (relatively) least steep declines, dropping 10%, from ~$50 million to ~$45 million USD.

Dedicated Micros has made significant cuts across the board.

Back in 2010, the company had over 600 employees, now it is less than 300, including a steep employee drop recently, across the board:

This has helped them reduce their operating expenses significantly:

This is a needed measure because they have depleted their cash and have been suffering multiple million annual losses.

Unfortunately, sales continue to fall around the world as well:

Quite simply, DM bet wrong and continues to do so. In its most recent financials, it emphasized the following strategy:

DM eliminated IP's greatest strength (openness) while keeping its biggest weakness (high cost). It is remarkable how long they have kept to this obviously failing strategy.

Five years ago, DM's CEO made their case:

It sounds as bad today as it did then.

Dedicated Micros was a leader not too long ago. Now, it is hard to see how they can stay in business independently for much longer.

Though their fall is extreme due to their failed contrarian strategy, it is a cautionary tale for even today's top companies about how rapidly things can change.

Dedicated Micros Collapses, CEO Says Shut Up, Debates IPVM on Apr 18, 2016
No one exemplifies arrogance and bad strategy quite like Dedicated Micros CEO...
Comments (14) : Subscribers only. Login. or Join.