The Dumbest Surveillance Chart Ever

Just when manufacturer marketing seemingly could not become any more irresponsible and ignorant, Avigilon steps up to the plate with a 'whitepaper' that includes the dumbest chart I have ever seen in the surveillance industry. In it, they calculate the cost comparison between analog and megapixel cameras with surprising results:

So a dozen 16MP cameras are equal to 520 analog ones? Of course, that is absurd, as examined in our posts on Arecont's Magical Marketing and Avigilon's 'Up to' claims. However, this takes the next illogical step of replacing hundreds of cameras with a handful of megapixel ones.

Yet it gets worse. The paragraph following the chart explains:

"In the above scenario, a large surveillance system covering a large area, such as a 25,000 square feet parking lot, needs 520 IP/analog cameras to achieve the same resolution of coverage as 33 5MP cameras or 12 16MP cameras." 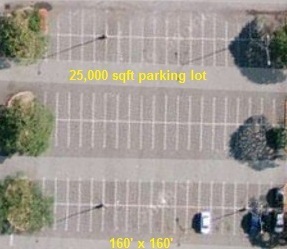 In this 'large' area, Avigilon assumes that 500 analog cameras would be covering 100 cars, for a 5 camera per car ratio. Sigh.

Does the surveillance industry have such low standards that Avigilon feels no shame? Does Avigilon have anyone in power who understands how surveillance systems are designed in the real word? Can we not demand even a minimal level of expertise?