Determining the correct Field of View (FoV) for each surveillance camera is one of the most important decisions in designing surveillance systems. It can also be one of the most challenging as a fundamental tension exists: People prefer wide FoVs because the wider the Field of View the more they can see. However, the wider the FoV, the less details they can actually make out in any given area of the scene. While megapixel has improved this situation, significant limits exists in how wide and how far one can see simultaneously.

One of the most common outdoor use cases is to monitor the perimeter of a building and the parking lot adjacent to the building. Ideally, it would be great to accomplish this with a single camera that captures the details of a person coming up to a building while at the same time capturing what is going on in the parking lot. 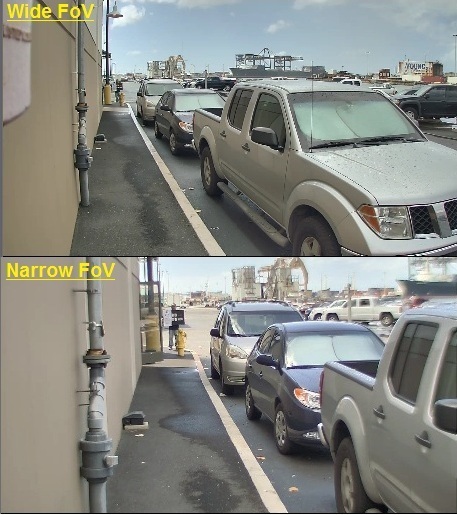 Both pictures are from the same camera. The only thing that has changed is the optical zoom.

Here is another view contrasting the setup of the two shots, providing another look at the tradeoffs in the scene captured. 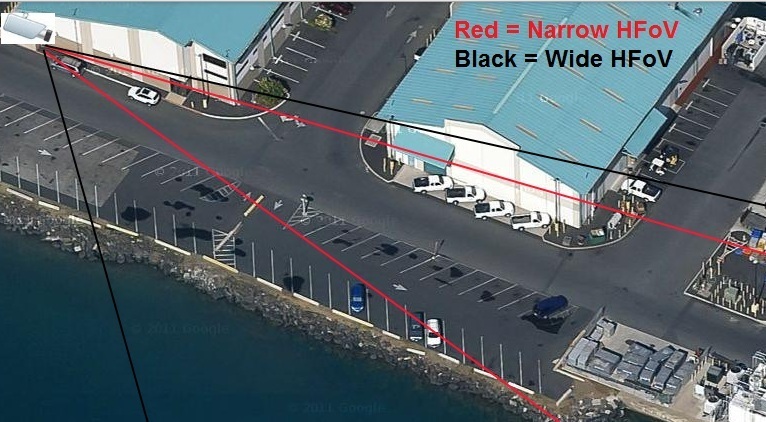 In this test, we were primarily interested in seeing the image detail tradeoffs on the sidewalk adjacent to the building. The distance from camera to the doorway where our subject stands is approximately 80 feet. The image below shows that the narrow FoV shot provides far more details than the wide FoV. You can almost make out the face of the subject in the narrow shot while the wide shot has no chance of doing so.

As the subject moves closer to the camera, the practical benefits of the narrow FoV setup decreases. In the image below, at ~45 away from the camera, the 'narrow' FoV is clearly still better but even the 'wide' FoV provides sufficient details of the subject's face.

Finally, at ~12 feet from the camera, the benefits flip. While both cameras provide very clear images of the subject's face, the 'wide' FoV still shows the complete subject while the subject is nearly exiting the Field of View of the narrow setup.

Even with higher resolution, tough decisions need to be made about wide of an area that a camera can cover. Frequently, users and designers want to do too much with a single camera. This short test should help show some of the negative tradeoffs of going too wide.