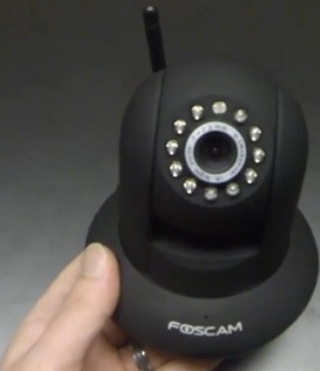 The $68 SD PTZ we tested disappointed, due primarily to poor image quality and high bandwidth consumption.

A member suggested we test a newer HD version that cost $40 more - the Foscam FI9821W, so we bought one from Amazon for $127 to put this to the test.

This model claimed 3 major improvements over the original one we tested:

So we put the new model to the test against the old one and two fixed HD cameras from Dahua and ACTi.

While ~$40 USD more than its SD counterpart (Foscam FI8910W), the substantial gain in image quality and possible bandwidth savings are worth it. Users looking for an HD indoor pan/tilt camera can find value in the Foscam FI9821W's offerings, if that users have patience for setup and configuration, and can work with the limited options available on the camera.

The big barrier, of course that remains, is VMS integration. Without PTZ controls on the VMS, what is the point of having a PTZ connected to a VMS?

The Foscam FI9821W has the same physical construction as the Foscam FI8910W, so we have included the FI8910W's physical overview for your convenience.

The video below review the key features and functionality of the Foscam FI9821W web interface.

Remote access to the camera is via UPnP (which may or may not work) or manual port forwarding, with no no automatic 'phone home' capability (i.e., Dropcam). As such, users may be frustrated and spend a lot of time unless they have strong technical skills (opening holes in firewalls, port forwarding, etc.).

We tested the FI9821W's IR illumination range at various distances, starting with Foscam's specified range of 8 meters (~25-26'), and tested it against the Dahua HD2100N and the SD Foscam FI9810W to guage IR performance. Illumination at this range was strong, and we can more clearly make out the first line of our eye chart, as well as see individual characters further down on the chart.

Note that since all of these cameras use fixed lenses, they were staggered at different distances from our subject in this test, so some differences in angle are seen in the comparisons below. 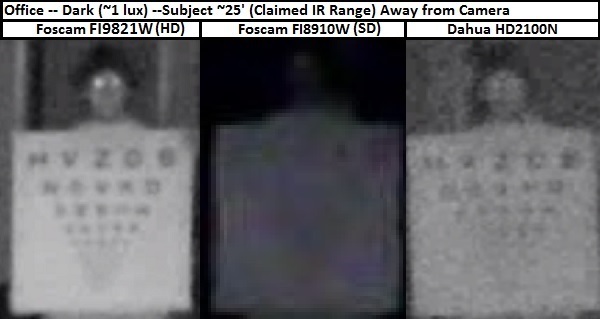 With our subject moving further away from the cameras (~50'), the FI9821W's image quality is slightly better than the Dahua HD2100N, with our subject's face more illuminated and distinguishable, and more of the eye chart is visible. 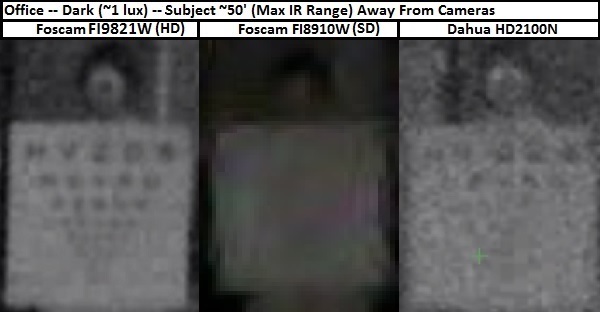 We compared the FI9821W to two low cost HD cameras, the ACTi D11 and Dahua HDW2100 (both ~$130 online), to see the tradeoffs in resolution when using a camera this inexpensive. We tested at one range, ~20' with a 22' HFOV, to highlight differences

In this scene, the Foscam FI9821W compares just below the Dahua HD2100, and a bit above the ACTi D11. Compared to the ACTi, our subjects face is clearer and more defined. However, when compared to the Dahua, lines 4-5 on our eye chart are more legible, and can resolve finer details than the Foscam. Also, note how the eye chart appears washed out and overexposed (with no exposure settings on the Foscam), while the ACTi and Dahau eye chart's are not overexposed.

We tested the Foscam FI9821W set to 4Mbps, and q levels were ~18 in full light, ~15 in low light, and ~26 when set on a tour. That is much lower than typical camera default q levels of 27-30. As such, one may consider dropping the bitrate to a lower level to save bandwidth.