We tested it against other large imager super low light models from Axis, Dahua, and Hikvision, and past 1/3" low light performers from Axis and Samsung (Wisenet III) to see how it compares on low light scenes ranging from 0.02 to 0.3 lux.

Below is an excerpt from our dark test of all 5 cameras:

Along with these scenes, we checked bandwidth, configuration, and other factors to see how it compares to these low cost leaders and others.

The good is that the 1/2" SNB-6005 provides similar details to other 1/2" super low light cameras at a comparatively low price.

The bad is much higher bitrates in low light that will impact storage/bandwidth needs if a cap / max bit rate is not set.

These are the key findings from our test of the Samsung SNB-6005:

This pricing is second lowest, next to the Dahua IPC-HF8281E, and similar to the Hikvision 6026 (without optional lens). It is significantly lower than models from Axis and Sony.

We first tested in this scene, viewing an empty parking lot/open field at lux levels ranging from ~0.01 to ~0.02 lux. No outdoor lighting was turned on in this scene. 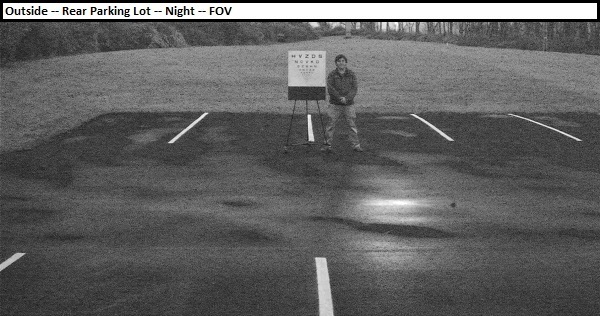 Increasing the horizontal FOV to ~75', details are reduced in all cameras. The SNB-6005 performs similarly to other large imager models here, again relatively bright, but noisier than most others.

Forcing cameras into color mode at night, the SNB-6005 takes on a red tint not seen in other models. Performance decreases in all cameras but the Hikvision DarkFighter model, with its increased color definition making the subject's outline clearer against the green grass background.

We tested in a lit parking lot, as well, with light levels ranging from ~0.35-0.3 lux from building lighting. 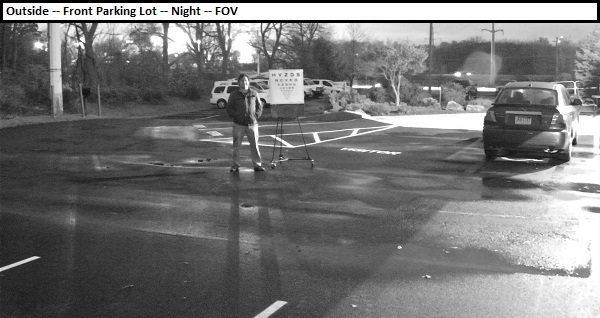 In this scene, the outdoor lights wash out our subject slightly, reducing details in the SNB-6005 compared to others, especially Axis and Hikvision.

In a wider FOV, the test chart is completely washed out in the SNB-6005 due to the strong foreground lighting, with no letters visible.

The SNB-6005 had the highest bitrates of all cameras tested in very low light (~32 Mb/s at ~0.01 lux), and was second highest (after Dahua) at other light levels. 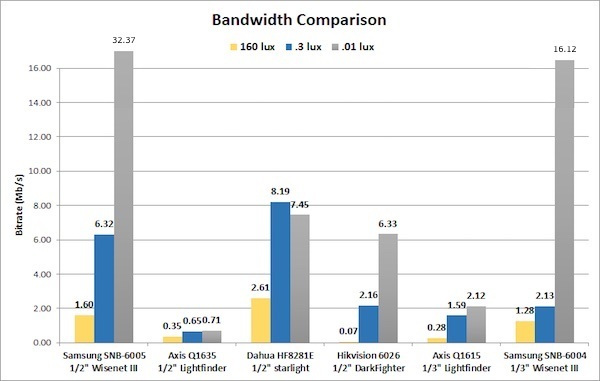 Axis vs Avigilon vs FLIR vs Hikvision vs Samsung Camera Pricing on Feb 03, 2016
The 'race to the bottom' is a big issue, with average prices dropping sharply...
Comments (0) : Subscribers only. Login. or Join.