Samsung is charging hard into IP cameras. Last year, they attacked the professional market with their WiseNet III launch.

Now, they are going after the consumer / residential market with their "SmartCam" offering.

Not only does Samsung have brand, they are leveraging a strong professional series into this space. Plus, their cloud camera does not charge any monthly fees, even for recording video.

However, Dropcam has established itself a the brand leader in this space, with incredible marketing and now their acquisition by Google.

We bought the 1080p Samsung SmartCam [link no longer available] and put it to the test against the Dropcam HD Pro: 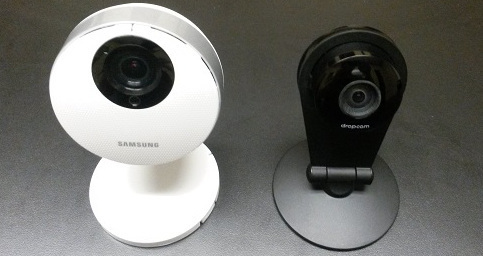 Here's how the SmartCam stacks up against Dropcam on key factors:

The Samsung SmartCam SNH-P6410BN is one of the strongest competitors to Dropcam yet, but still falls short in some areas.

While SD card recording is simple to set up, playback may be confusing for some users due to lack of feedback in the user interface. Additionally, since the UI does not allow export, retrieval of clips from the SD card is difficult and requires the user to remove the SD card.

The SmartCam's image quality is on par or better in full light and WDR scenes than Dropcam, with a wider field of view. However, its uneven IR illumination pattern results in poorer low light video than Dropcam, making it less useful at night.

With technical improvements, Samsung's no monthly cost recording option could be a key differentiator against Dropcam.

We begin by demonstrating the initial out of the box setup:

Next, we take a look at Samsung's cloud interface:

Playing back SD card video is simple for the most part, with users choosing the date and recording type (motion, manual, alarm, or continuous) and hitting search, with video populating a timeline. However, lack of feedback on the user interface to indicate loading makes it seem as if the UI may be frozen and may be confusing for users.

This video shows playback operations and these issues:

Since the cloud UI lacks any sort of export functions, users must remove the SD card from the camera and manually browse files via their PC. Files are named sequentially (01.avi, 02.avi, etc.), instead of with the time and date they were recorded, making retrieving video especially cumbersome.

This video reviews these issues:

We take a look at the physical construction of the SNH-P6410BN in this brief video:

We tested the SNH-P6410BN against the Dropcam Pro in full light, dark, and WDR scenes. The SmartCam was shot in full resolution 1080p while the Dropcam Pro was 720p. The FOV's of both cameras can be seen in the image below.

In full light, across a ~22' horizontal field of view, details are similar in the SmartCam and Dropcam. The Samsung camera is able to read 1-2 lines further down the test chart, but reading text this small is unlikely to be required in the residential applications these cameras are intended for. Note also that the Dropcam's white balance and brightness result in a more vibrant image.

The SmartCam's IR illuminator has a very bright center hot spot, with dim illumination at the edges, seen here as the subject moves across the room:

Because of this hotspot, the SmartCam is outperformed by the Dropcam Pro, which has a more even IR illumination pattern, making our subject moderately more recognizable, with less artifacting. 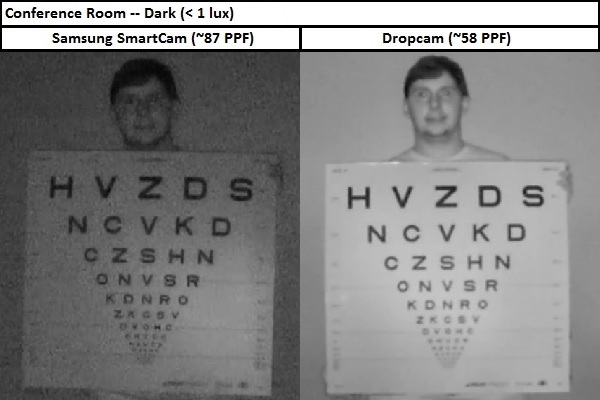 We tested both cameras against an open exit door to test WDR performance. Against the bright outdoor lighting, the SmartCam provides moderately better images of our subject's face when he is still. 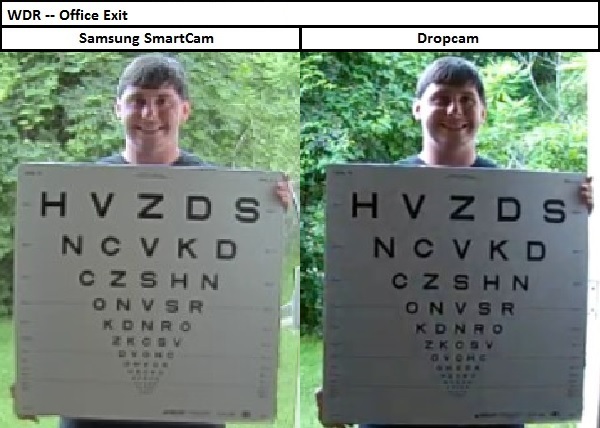 Directory Of Consumer Security Cameras on Aug 16, 2017
The consumer camera segment continues to grow, with new startups and models...
Mega Chinese Electronics Manufactuer Xiaomi Yi Camera Tested on Feb 05, 2016
Xiaomi's revenue is 4 to 5 times larger than Hikvision's. Only in business...
iControl Piper NV Camera Test on Jun 24, 2015
iControl has raised over $100 million in VC funding to transform the home...
The $40 Million Funded Startup Canary Tested on Jun 16, 2015
This startup, Canary, has raised $40 million total since 2014. With Google...
Samsung Outdoor SmartCam Tested on Jun 09, 2015
The #1 missing feature for Google / Nest / Dropcam has been no outdoor model,...
FLIR FX Tested on Apr 08, 2015
FLIR is going after the home / consumer surveillance market with their FLIR...
Panasonic Unveils 'Dropcam Killer' Nubo on Mar 02, 2015
Many have tried, but no manufacturer has yet toppled Dropcam as the most...
Comments (19) : Subscribers only. Login. or Join.