In our initial testing of Pelco's Optera multi-imager, the main issue was their ONVIF 'bowtie' video streaming which undermined third party integration.

Now, Pelco has released new firmware that they say fixes this problem with what they call 'tiled' mode as well as a new 'panomersive' mode. We have tested this new firmware and added these results to the report below.

[Update, Sept 2016] Note: Exacq has released official support for Optera in version 8 of their VMS, requiring only one license per camera and integrating the Optera SDK.

[Nov 2015] This summer, Pelco came out firing against Arecont, touting the superior performance of its new multi-imager line vs Arecont's. But is this really the case?

We bought a Pelco Optera 180° multi-imager 12MP camera, testing it against Arecont's 12MP SurroundVideo as well as a Panasonic 12MP fisheye panoramic (WV-SFV481) in order to measure performance in low light, full light (below), and WDR scenes:

As the multi-imager market is now expanding quickly, later this year, we also plan to test Axis' 33MP multi-imager model as well as Avigilon's HD multi-sensor.

Pelco has added two new streaming modes to the Optera in firmware 2.6.1:

First, this mode includes three streams, each 2560x1600 (~4.1MP), comprising a full 180° panorama when placed next to each other. Because the camera uses 4 imagers but only 3 streams, each stream contains 1-1/3 imager, with stitching visible in each stream, below:

These streams are dewarped and flattened inside the camera, but generally show about the same area as the "bowtie" default panoramas, with only slight differences trimmed from the view when dewarping, barely noticeable:

This image shows the tiled streams in use in Exacq, in a layout next to each other to create a 180° panorama: 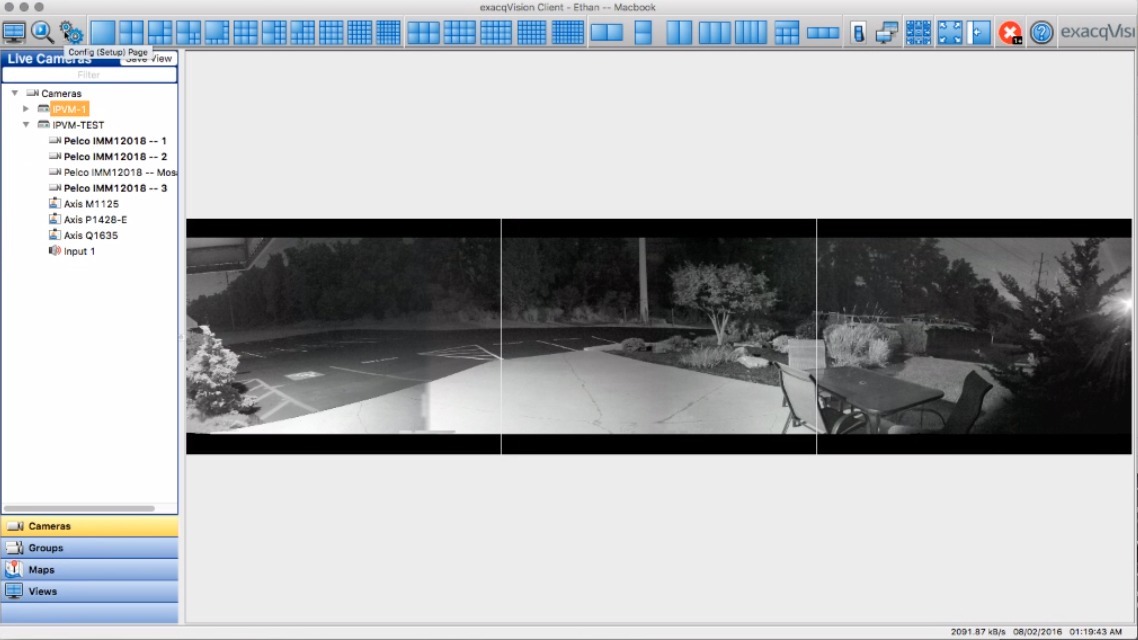 The other mode offered by the Optera in new firmware is intended for use with VMSes implementing their Panomersive SDK, and is not generally useful to other VMSes. The Uni-stream mode outputs a single image with left and right "bowties" stacked on top of each other, 4096x4048. This is intended to make VMS integration simpler, instead of requiring multiple streams to be integrated for Panomersive viewing, though integrated VMSes have not yet implemented it (e.g., Genetec and Milestone). 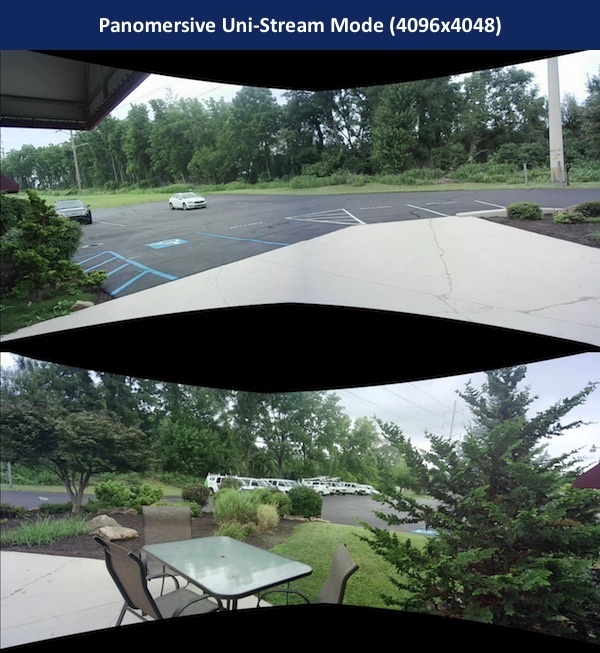 The option to use multiple unwarped video streams (added in firmware 2.6.1) removes the prior key negative of "bowtied" video streams when using ONVIF/unintegrated VMSes, which resulted in warped/distorted images.

Finally, VMS integration via Pelco's own SDK supporting stitching and immersive viewing, works quite well, providing a superior experience to the traditional Arecont separate video display. However, we were only able to test it with Milestone and Genetec as support for it is still limited.

The Optera is about the size of a typical full size dome camera. Similar to the Arecont SurroundVideo models, imagers are mounted around a spherical main body, with factory focused lenses.

Note that unlike most cameras, including other multi-imager models, the IMM requires 802.3at PoE for operation. 802.3af will not power it.

The majority of the Optera's web interface is essentially similar to Pelco's other SureVision cameras. Users should note that the camera defaults to 1/15s slow shutter (66ms), and should be changed to 33ms to avoid motion blur.

The Optera's three streams when using the standard Panomersive mode (overview, left, right) are individually configurable. In tiled mode, all three tile streams are configured as one (no unique settings for each).

Note that as in their other models, Pelco does not use true VBR (set compression, variable bandwidth), using Constrained Variable Bitrate instead, which varies the bitrate approximately ±10% of the target bitrate, adjusting compression accordingly.

With the release of firmware 2.6.1, the Optera now includes three streaming modes, with the new Tiled mode (below) intended to improve integration with those VMSes not using Pelco's SDK.

Both Panomersive and Tiled streams worked in VMSes we tested without issue, including Avigilon, Genetec, Milestone, Exacq, Axxon, and Network Optix.

We look at these streams in more detail below.

There are three streams available from the Optera in this mode:

Of the VMSes tested, ExacqVision, Genetec, and Milestone XProtect were able to view all three streams. Avigilon only integrated the Overview stream.

This image shows the full 180° view as shown in Exacq, with the left and right "bowties" viewed next to each other (click for full size image):

This mode includes three streams, each 2560x1600 (~4.1MP), comprising a full 180° panorama when placed next to each other. Because the camera uses 4 imagers but only 3 streams, each stream contains 1-1/3 imager, with stitching visible in each stream, below:

These streams are dewarped and flattened inside the camera, but generally show about the same area as the "bowtie" default panoramas, with only slight differences trimmed from the view when dewarping, barely noticeable:

The last mode offered by the Optera is intended for use with VMSes implementing their Panomersive SDK, and is not generally useful to other VMSes. The Uni-stream mode outputs a single image with left and right "bowties" stacked on top of each other, 4096x4048. This is intended to make VMS integration simpler, instead of requiring multiple streams to be integrated for Panomersive viewing, though integrated VMSes have not yet implemented it (e.g., Genetec and Milestone). 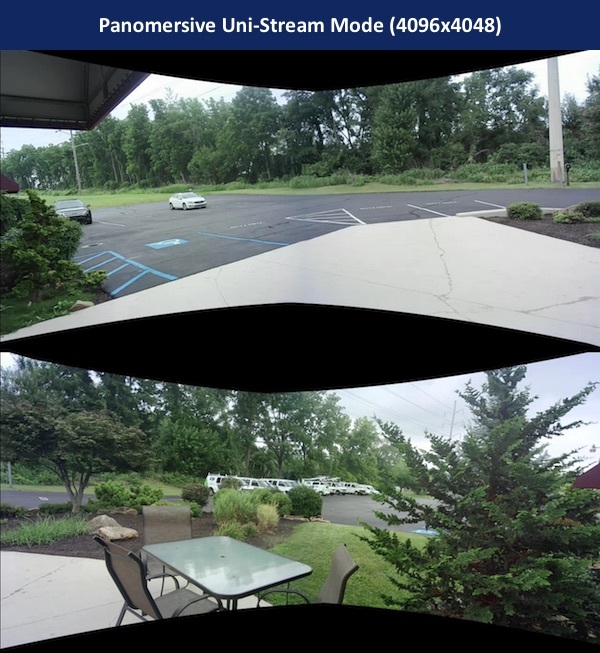 Aside from simply integrating the above streams, Pelco has also released an SDK to developers for immersive viewing, which they call "panomersive." This integration allows users to click in a full 180/270/360 panorama (depending on camera) and reposition view area angle and zoom.

To date, the only third-party VMS integrations complete with these features are Milestone XProtect, which is achieved through a plugin developed by Pelco themselves and Genetec Security Center. Pelco's own VideoXpert VMS supports Optera as of version 1.7.

This plugin can be used in more than one tile at a time, with each tile's view independently configurable. This is seen below in the top two tiles of the 2x2 view, with standard cameras seen below: 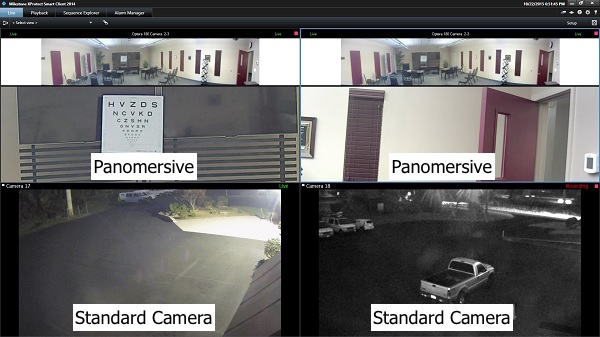 Update: In version 8, Exacq announced supported for Optera, with the camera now supported by the Pelco driver instead of ONVIF, and immersive viewing integrated. This example shows the camera modes: warped overview, dewarp (with virtual PTZ control), and full panorama.

Tiled streams worked with multiple VMSes tested via ONVIF (Axxon, Nx Witness) as well as direct drivers (Genetec, Milestone), but was unable to connect to Avigilon Control Center. In Exacq, Milestone, and Genetec (direct integrations), only one license was used for all three channels. ONVIF integrations require a license for each channel.

The image below shows the camera in use in Exacq prior to their integration of the Optera SDK, with tiles placed next to one another to display the full panorama. 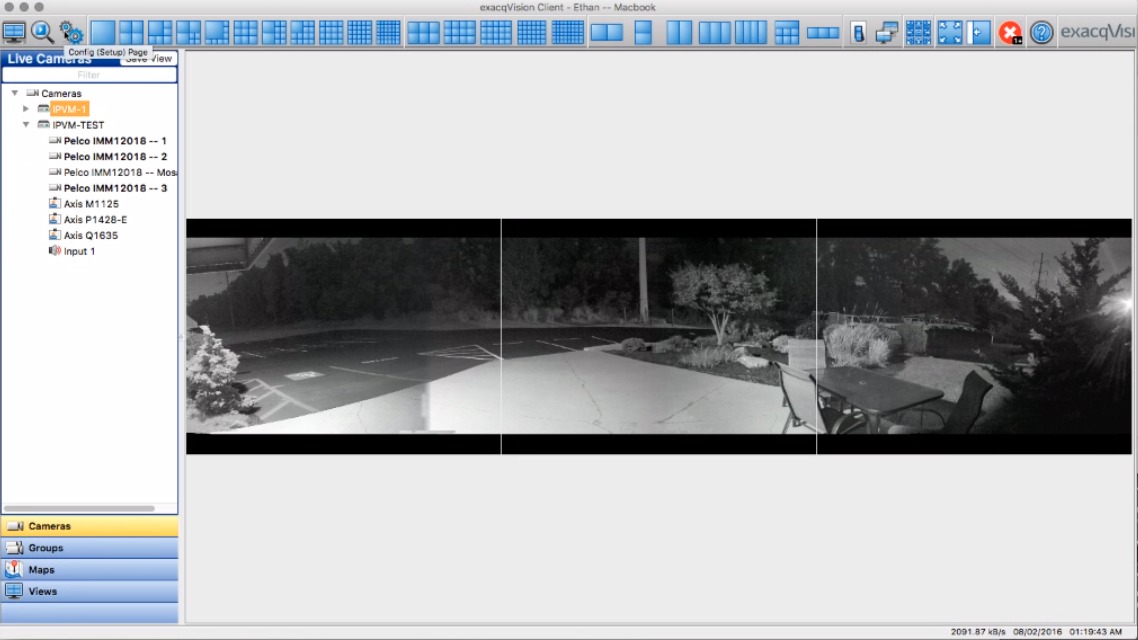 We tested the Optera against the Arecont SurroundVideo Omni in a 180° configuration, as well as the Panasonic WV-SFV781L in wall mount 180° mode. We also included an Axis Q1615 matched to the 45° FOV of one of the Arecont's imagers.

We tested the Optera against Arecont's SurroundVideo Omni 12MP, and Panasonic WV-SFV481 to show how it compares to other 180 panoramic options, as well as the Axis Q1615 to show its performance relative to single imager models.

The image below shows the full FOV of the Pelco Optera:

The Optera provides clearer images of both the subject and chart than Arecont's Omni, though with moderately less detail in the subject's face than the Axis Q1615 LightFinder camera. The Panasonic panoramic provides much lower PPF and thus fewer details. 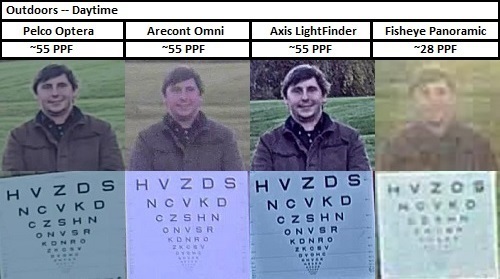 With the subject further from the camera, ~50', PPF drops in the 180 and single imager cameras to ~30. The Optera again provides better details than the Arecont Omni at this FOV width, though the Axis Q1615 provides much better details than both. PPF in the fisheye camera is very low, with few details provided. 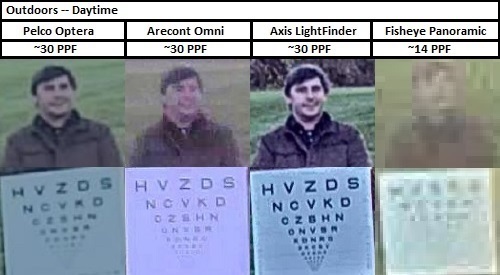 The Optera provided much better images than the Arecont Omni in low light (~0.05 lx), with lines 1-3 of the test chart legible, but moderately worse than the Axis Q1615. 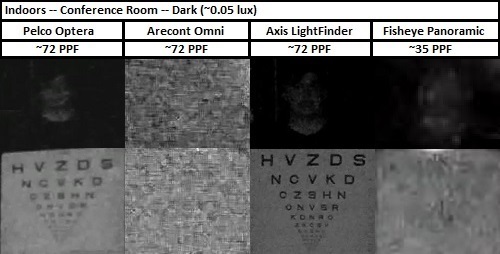 We tested WDR in a warehouse scene with open overhead door, seen below. 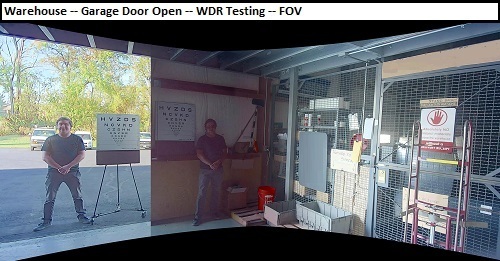 In this scene, the Optera provides some of the best WDR performance of cameras tested, with better details against both strong backlight and dark areas of the scene than other models. However, note that the Optera's flattening/dewarping (creating the "bowtie" effect) squashes the subject's face out of proportion relative to others. 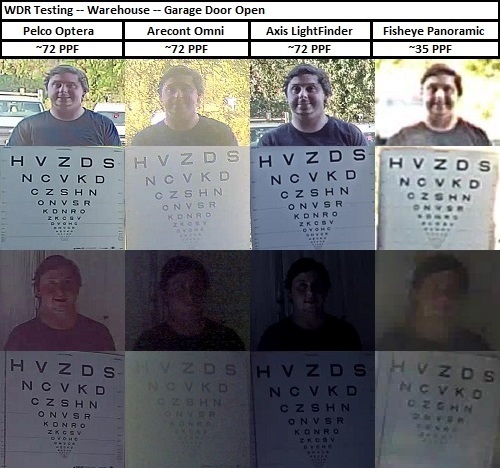 The Optera's bitrates were slightly higher than both the SurroundVideo Omni and Panasonic panoramic 12MP models in full light. Bitrates were similar when using both Panomersive and Tiled streaming modes.

Note that the Axis Q1615 consumed about ~300 Kb/s in the same FOV as the left-center imager of the Pelco and Arecont cameras in full light. This amounts to ~1.2 Mb/s total multiplied out for four imagers (not accounting for differences in each imager's FOV), must lower than other cameras tested.

Axis 'Sold Out' P3707-PVE Multi-Imager Tested on Oct 18, 2017
Axis faced significant product shortages over the summer. Perhaps the most...
Hanwha 20MP Multi-Imager Tested (PNM-9081VQ) on Oct 09, 2017
Hanwhwa has introduced the latest in their multi-imager camera line, the...
Troubles At Arecont Vision on Oct 03, 2017
Arecont is facing big problems. But Arecont says the future is 'bright'. In...
48MP 180 Camera (Digital Watchdog) Test on May 10, 2017
Camera resolution continues to advance, with Digital Watchdog...
Hikvision PanoVu Multi Imager Tested on Feb 08, 2017
Hikvision has entered the multi-imager market with their 180° PanoVu...
Axis 15MP Multi-Imager Tested (Q3708-PVE) on Feb 07, 2017
Axis continues to expand in the multi imager market, adding to a segment...
Pelco Favorability Results 2016 on Dec 02, 2016
This is the first in a series of studies of manufacturer favorability. 100+...
Vivotek 12MP IR Multi-Imager Tested on Aug 09, 2016
A key weakness of multi-imager cameras is poor low light. While integrated...
Arecont Attacks Competitors, Drops Prices on Jun 09, 2016
Arecont is fighting back against the surge of multi-imager cameras from Axis,...
Pelco Sales and Marketing Execs Both Out on May 16, 2016
Both Pelco's VP of Sales and VP of Marketing are out of Pelco. In this note,...
Ambarella Pushing These IP Camera Trends on Apr 13, 2016
Will the market soon be ruled by H.265 and 4K Multi-sensor...
Top 5 Video Surveillance Product Advances Going Into 2016 on Dec 31, 2015
Here are the 5 product areas that have had the most meaningful product...
Avigilon HD Multisensor Camera Tested on Dec 14, 2015
Avigilon has released 9MP and 12MP HD Multisensor cameras,...
Axis 33MP Camera Tested (Q3709) on Nov 30, 2015
In 2012, Axis declared the megapixel race over. Now, Axis has released a...
Pelco Optera Multi-Imager Cameras Overview on Apr 07, 2015
2015 looks to be the year multi-imager goes mainstream. Pelco is one of a...
Comments (26) : Subscribers only. Login. or Join.