As an NVR, this performed very really badly.

But, as a member suggested to us, could a $50 mini NVR be used as an IP / HD spot monitor? 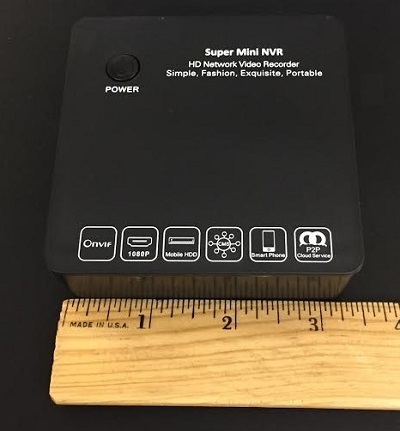 Adding a spot monitor or public view display in an IP surveillance system often means adding a dedicated client PC or a decoder, adding hundreds of dollars in cost to the system.

Inside, we look at three key questions:

The mini NVR used in this test was purchased on Amazon.com for ~$52 USD.

For experienced users willing to deal with its ONVIF issues and adding cameras via RTSP, the mini NVR may be a useful option for a public view monitor or wall mounted display, far less expensive than other standalone decoder units.

However, users should expect to view a single HD camera or multiple SD streams, not multiple high definition streams, as the unit's lack of processing power will cause streams to freeze or drop.

Nonetheless, compared to devices like Android MiniPC and Raspberry Pi, as a spot monitor, it is quicker and less cost for a basic spot monitor setup.

The mini NVR is small, about 3.5" square, and less than 1" thick. In addition to standard ports (Ethernet, USB, eSATA, etc.), it uses a standard micro USB connector for power. This allows users to power it via a display's USB port, most commonly used to view photos/videos, eliminating the need to run an additional power cable.

This video reviews the physical setup of the NVR:

Like other ONVIF NVRs we have tested, the mini NVR automatically searches for ONVIF cameras on the local subnet. Users may simply click to add them to the unit. However, we found that ~50% of cameras did not connect properly or at all, with some only connecting the main stream, some the sub stream, and some neither.

Connecting via RTSP worked in all cases. The NVR allows an RTSP sub stream to be set in addition to a full resolution stream, and switches automatically between the two when switching from split screen to full screen. This feature is not found on many NVRs or VMSes.

This video briefly reviews adding cameras to the NVR:

While the NVR allows for up to 8 IP cameras to be added, we found that displaying more than two HD cameras via local monitor was nearly impossible. In most cases, it simply did not work. In others, streams froze or stuttered.

If lower resolution (SD) secondary streams are available, up to four may be displayed reliably in a split screen. However, not all cameras provide a secondary stream via RTSP, and given the unreliable nature of the NVR's ONVIF compatibility, this may not be an option.

This video shows these streaming issues:

Both the local and web interface of the mini NVR are limited, with several issues:

Note that we have not tested playback performance of this NVR as this test focused on its use for live monitoring only.