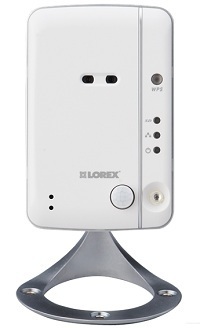 Lorex has quietly become one of the biggest forces in the consumer / home surveillance market, on pace to sell over 500,000 cameras this year through mass distribution and big box retailers (like Costco). Indeed, the company was just acquired by thermal manufacturer FLIR for $60 million as the cornerstone for FLIR's expansion into the low end of the surveillance market.

The camera line has pretty much every bell and whistle one might want for home / consumer use - integrated IR, dual imagers for day and night, PIR, microSD storage, microphone, USB powered, wifi, etc. The most important limitation is that the camera is SD only [Lorex says future versions will support MP].

The video below overviews these functionalities:

Depending on the software support of the camera, the street price ranges from $150 to $200, on the high end of the consumer / home market for IP cameras. However, remote / cloud access is free, with no recurring charges.

Setup is extremely easy even for a non technical user. No network configuration is required for remote access and the camera automatically phones home to Lorex's 'cloud'.

Remote access is provided via apps and a PC based thick client. The software is fairly simplistic with the main distinction that it supports remote playback of video recorded on the microSD card.

One notable limitation on SD storage playback is that no fast forward nor rewind controls are provided and video is segmented into numerous multi-minute clips. This makes video review cumbersome.

Not suprisingly, using the built in PIR provided quite accurate motion detection and far better than video based alterantive.

When a user logins, the camera checks for software updates automatically, offers a prompt asking if the user wants to upgrade to new firmware and then applies. This is a nice benefit to keep cameras up to date with new features, bug fixes, etc.

As an SD camera, resolution is clearly not a reason to choose this offering. Below is a comparison to a budget line Axis 720p offering, showing the deficiency of the Lorex:

And here is a section digitally zoomed showing the difference between the SD Lorex and today's more 'standard' 720p HD camera:

On the other hand, the built in IR LED combined with the b&w imager produce much better low light images that cameras in this class.

The biggest negative is the software interface for search / investigations which is quite rudimentary and lacking.

Axis's offerings overall are clearly better, with many more IP cameras to choose from and a more polished software interface in Axis Camera Companion.

However, Lorex has two key advantages:

Ultimately, this market is in the middle of significant developments and we expect these companies as well as other rivals to continue to expand edge storage support and simplify the remote/cloud access of these recordings.