Honeywell is a huge name, but not one well respected in video surveillance, unless you are an alarm dealer.

The company was late into IP but now offers their own IP camera line, including their high end positioned HCW1F [link no longer available], a 720p HD WDR ONVIF camera that they claim "adapts to varying lighting conditions to ensure the highest picture quality even in extreme low-light conditions."

We bought an HCW1F and put it to the test against Axis, Bosch, Sony and Samsung cameras.

And here's the outside part of a WDR scene:

ADI is the only authorized distributor of Honeywell's cameras, though they may be found online at inflated prices. For example, based on ADI pricing, the HCW1F has an estimated street price of about $500 USD (no lens included, ~$130, but online, it sells for about $700+, at least $250 more. Note that Honeywell's recommended varifocal lens, the 3-8mm HLD3V8MPD [link no longer available] is a relabeled Computar AG3Z3112FCS-MPIR, which sells online for about ~$70 less than Honeywell street pricing.

For those seeking a solid WDR performer at a lower than average price, the Honeywell HCW1F may be a good fit. On the other hand, inferior low light performance is a problem. Additionally, users should beware of ONVIF streaming issues, which may be problematic depending on which VMS is used.

In this video, we briefly examine the physical construction of the Honeywell HCW1F box camera:

This screencast reviews the web interface of the HCW1F:

In full light, ~160 lux, the HCW1F provides better color fidelity and facial details of our subject than most cameras in the test. Text on the chart is clearly legible to line 5.

Lowering light to ~0.5, the HCW1F is much dimmer than all other cameras in this test, with subject details nearly indiscernible. The test chart remains legible to line 3/4, while other cameras can discern line 5. Note that Honeywell does not market this camera as a low light model.

We tested the camera in both full light and low light to check TVL. In full light, it delivered about 450 TVL, about average for 720p cameras. In low light, the camera is unable to capture the chart at all. 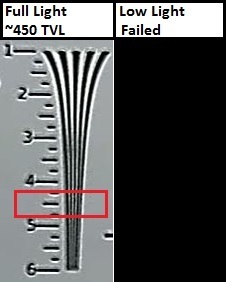 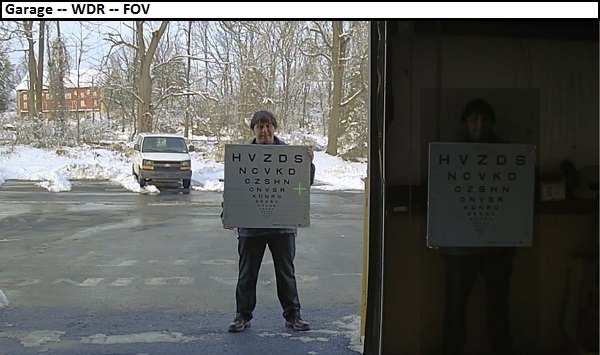 With the HCW1F's WDR set to maximum, our subject is clearly visible in the brighter scene, but when our subject moves to the darker portion of the scene, it becomes harder to make out line 6 on our test chart and some of our subjects facial features such as expression and facial structure. 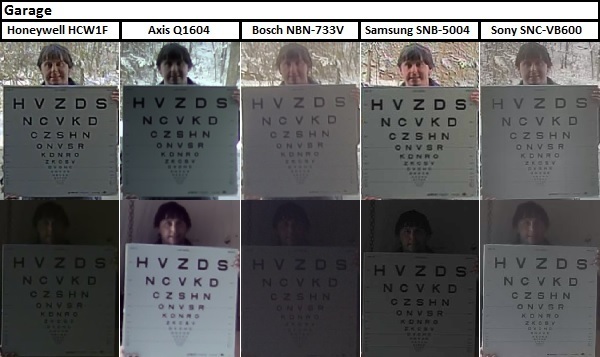 The comparison below shows the different WDR settings of the HCW1F. On High, performance against strong backlight is best, but lowered in the darker area next to the door. Medium and Low both decrease performance in bright sections, but improve imaging in darker areas. Users should try these settings if dark areas are a key concern. 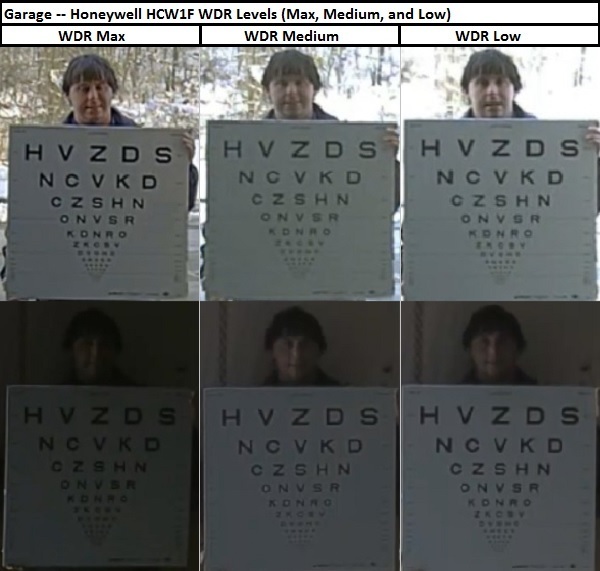 Below are bandwidth measurements of cameras used in this test. We standardized the cameras at 1/30s exposure, using H.264 codec with default compression for each camera.

The HCW1F had some of the lowest bandwidth consumption in this test in full light, and by far lowest in low light. However, below 1 lux the camera's image was nearly black, accounting for much of this difference.

The following firmware versions were used for the test:

Reinforce your understanding of the report with this short, optional quiz.