Chinese manufacturer, including the two mega ones, Dahua and Hikvision, are best known in the West for super low cost, entry level cameras.

However, how well do their 'higher end' ones one work?

We bought a 3MP WDR, Integrated IR Hikvision dome (the awkwardly named DS-2CD4132FWD-IZ [link no longer available]), based on Hikvision's recommendation for a model positioned against top entries from Western manufacturers.

We tested it against Avigilon, Bosch, Panasonic, Samsung and Sony models across indoor and outdoor scenes and for competitive IR and WDR performance.

Here is a preview of the ~1 lux scene:

At ~$550 USD online, the Hikvision 4132 is priced similar to low cost manufacturers' indoor 1080p domes such as Samsung and Vivotek ($500-550), and substantially lower than competitors such as Axis, Panasonic, and Sony. Pricing is as follows:

The DS-2CD4132FWD-IZ's combination of well performing integrated IR and WDR, along with its lower than average price point make it a solid choice for interior scenes where dynamic range and low light are key concerns. However, users should beware of the camera's uneven IR coverage at wider fields of view. Additionaly, day/night switching to levels should be adjusted appropriate to their scene to avoid bandwidth spikes at lower light levels prior to the camera switching to night mode.

In this video we review the physical features of the DS-2CD4132.

This video reviews the web interface of the camera, generally unchanged from most Hikvision cameras, but with added options for IR, WDR, and motorized zoom.

The DS-2CD4132 reached its specified illumination range of 30m, with modest weakening of IR power. In the comparison below, the 4132 is subject is shown with subject at ~100', next to the Avigilon 2.0W-H3-BO1 and Panasonic WV-SFV631L, both with 30m specified IR range.

We found that the 4132's IR pattern was even when the camera was set to narrower fields of view, 60-70°, with some darkening at the edges. Our subject is still easily visible in the image below. 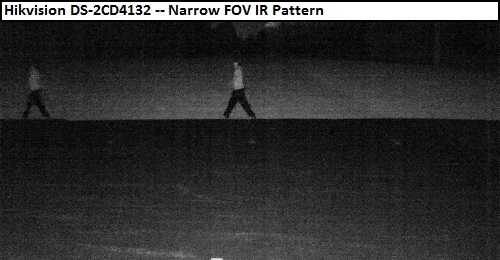 However, at wider fields of view, ~90° seen below, he was difficult to detect due to substantially weaker IR power at the edges of the scene. 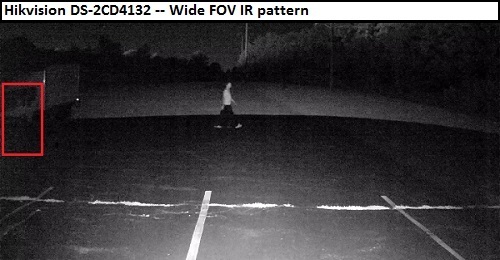 The DS-2CD4132 includes smart IR features which adjust power to compensate for subjects in the scene, reducing overexposure. We found that these features were responsive and worked well as objects entered the scene, but power was slower to increase as the scene cleared.

This video shows the LEDs adjust down as the subject approaches the camera, and slowly increasing in power as he exits.

We shot out the camera against other leading 1080p models in our interior conference room, with the FOV seen below: 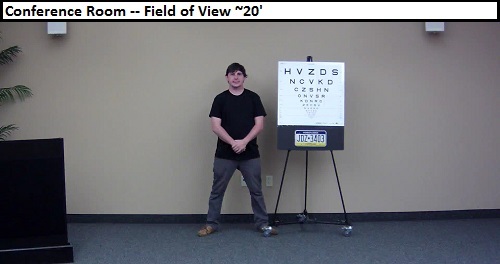 In full light, the 4132 provides details similar to other cameras in this test with no major issues. Colors appear somewhat duller than other models, but subject details and the test chart are still easily visible.

In the dark, 1 lux and below with IR on, the DS-2CD4132 provides clear details of the test chart down to line 6/7, similar to the Panasonic SFV-631L, and slightly better than the Avigilon H3 2MP bullet. The only non-IR camera providing details near this is the Samsung SNB-6004.

We tested the cameras' WDR performance  in a warehouse scene against both strong backlighting from the sun outside as well as darker areas of the scene. 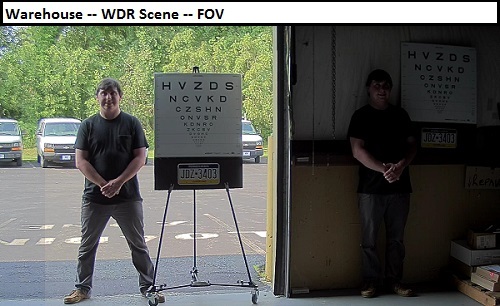 In full light and dark scene, the 4132's bitrates were low compared to other cameras tested.  However, in low light, 2-3 lux, prior to the camera switching to night mode with IR on, bandwidth spiked to over 7 Mb/s, highest of any cameras in this test by more than 2 Mb/s. Users may adjust the day/night switching threshhold to switch to monochrome at brighter levels to avoid this.

These are the firmware versions used in each cameras:

Hikvision Darkfighter 1/2" Imager Camera Tested on Aug 31, 2015
Can Hikvision beat Axis and Samsung in pure low light? The Chinese...
Hikvision Anti Hacking Firmware Tested on Jun 03, 2015
Hikvision has had historic hacking problems, with DVRs turned into Bitcoin...
Hikvision Hires Ex-Samsung / Panasonic Exec on May 18, 2015
Hikvision's expansion continues, with the mega Chinese manufacturer now...
WDR Camera Shootout 2015 on May 04, 2015
This is the most comprehensive Wide Dynamic Range (WDR) IP camera shootout...
Uniview Starlight Camera Tested on Apr 28, 2015
The company claims $263 million in 2013 revenue and to be the third largest...
Top Manufacturers Gaining and Losing Ground 2014 on Oct 27, 2014
IPVM survey results of 100 integrators show what manufacturers are gaining...
Hikvision 2013 IP Cameras Tested on Dec 02, 2013
Hikvision claims to be the #1 surveillance manufacturer in the world. That's,...
Comments (49) : Subscribers only. Login. or Join.