You may not know Dahua, but you should. They are the 'other' big Chinese surveillance manufacturer (besides Hikvision) that is aggressively expanding throughout the rest of the world. However, unlike Hikvision, Dahua is much more reluctant to use its own brand outside of China. Instead, North Americans more likely know Dahua from their resellers like Q-See, IC Realtime, EYESurv, Mace, and many, many others, which have become very popular among budget / DIY / entry level IP camera users.

We bought 3 Dahua IP cameras to shootout their performance against leading Western brands to better determine their competitive positioning. The 3 Dahua cameras are:

We choose those 3 models to get a range of performance across price levels and form factors.

The cameras are pictured below side by side in our test rig: 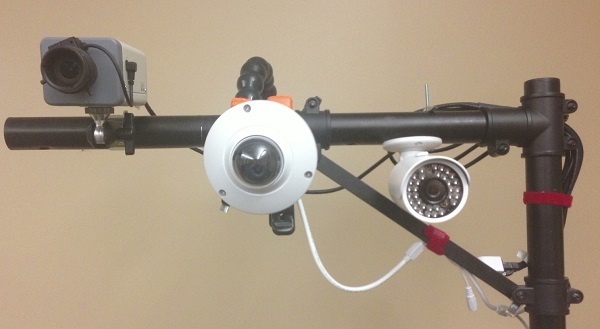 This will be the first of our ongoing coverage of Dahua.

The cameras themselves all performed fairly solid, especially considering their very low pricing. However, since most of you will buy Dahua through a variety of OEMs, you should check their performance, their support and particular price levels.

Though all Dahua cameras in this test share the same web interface, imaging performance varies from model to model. We have grouped our findings accordingly:

Dahua cameras are not available under their own brand in North America. As such, users have two obstacles when looking to install and support these cameras:

The lowest prices we found on the cameras in this test are as follows:

The HF3101N box camera is the standout performer among the three Dahua cameras tested. It is similar to Arecont's overall image quality / feature sets but likely at lower prices. Its low light performance, though, is not as good as the much more expensive Axis Lightfinder and Bosch Starlight cameras.

In this video, we review the form factor and construction of each of the Dahua cameras. Users should note the following:

This video reviews the web interface of Dahua cameras. All models tested shared a similar interface, with few differences depending on feature set (WDR, audio, etc.). Note the following:

Dahua includes multiple exposure modes, with little explanation of what each actually does. This screencast reviews these modes.

We compared the HF3101N against other leading low light and WDR cameras to test its performance. At full light, no major imaging issues are present. Colors are slightly desaturated, similar to the Bosch NBN-733V, but the subject may be clearly seen and identified. 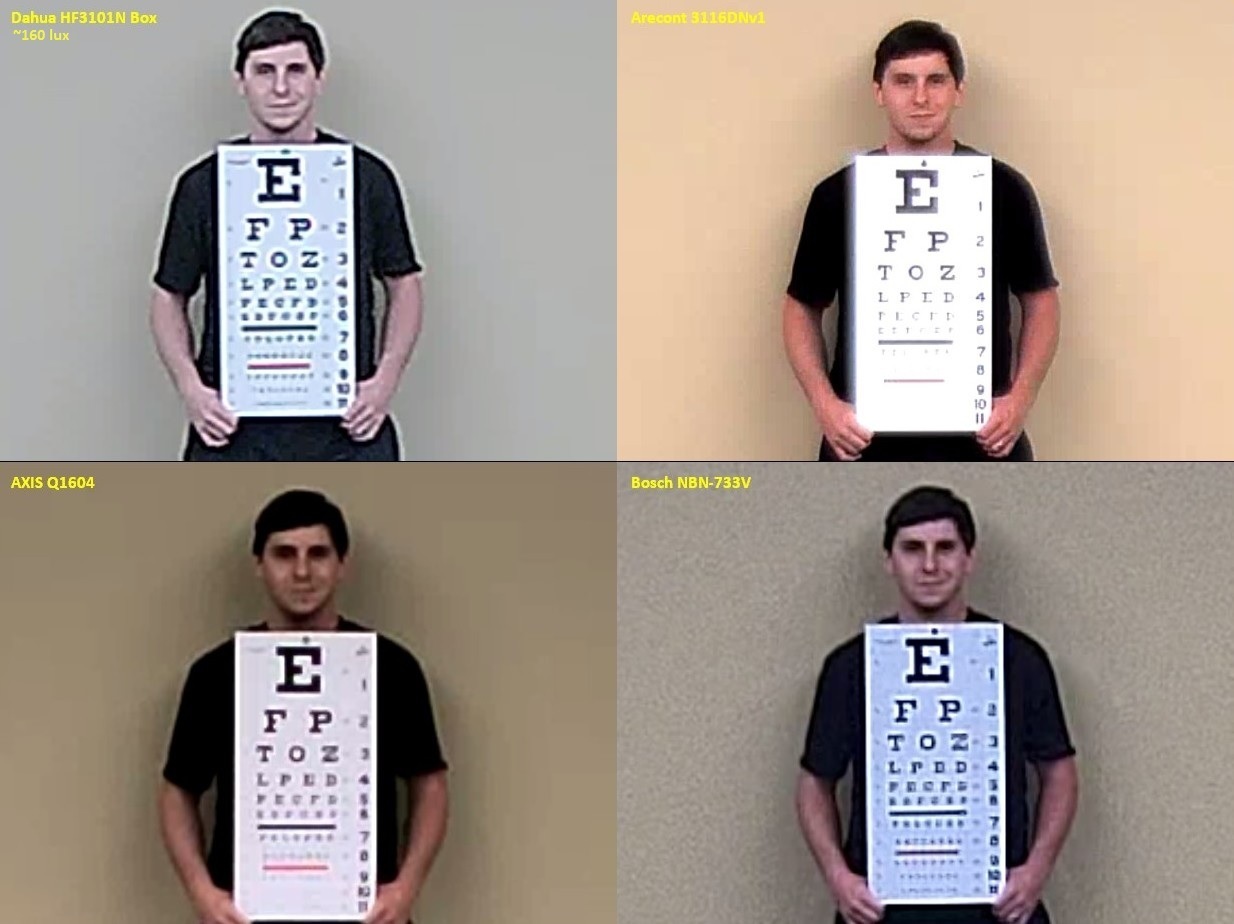 In our dark scene, below 1 lux, with WDR on the HF3101N produces practically no image, worst in this test. In this scene, the Q1604 was also set to WDR on, making its minimum exposure 1/44s instead of 1/30s. 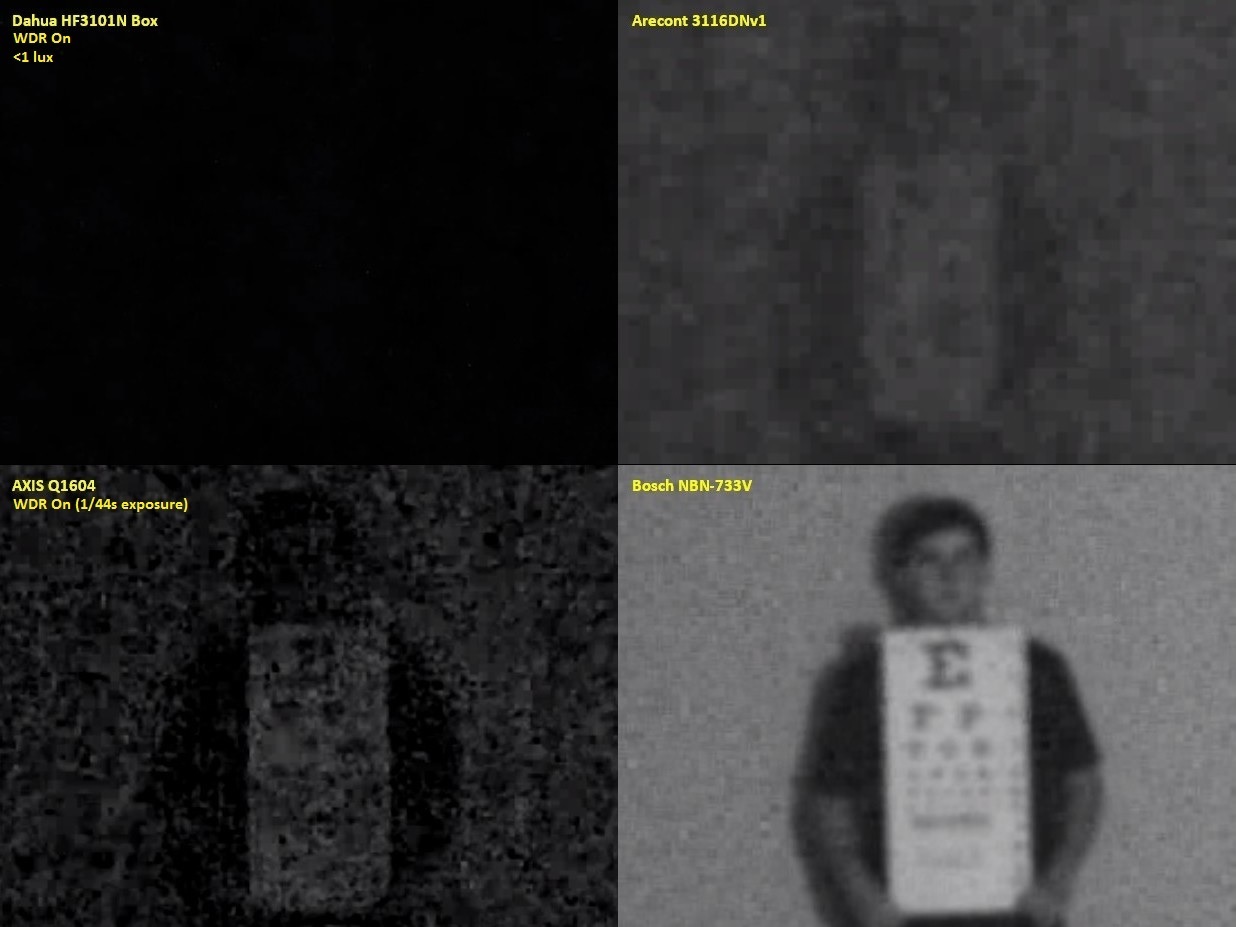 Turning WDR off and increasing gain to 100, its maximum value, our subject is easily seen, though without any details. The top line of the chart is readable, but others below are not. The Q1604, with WDR off, shows more details due to its brighter image, with the second line (FP) visible on the chart. The Bosch NBN-733V is least noisy of all cameras in this test, while the Arecont AV3116DNv1 shows very little detail, making it difficult to distinguish the subject. 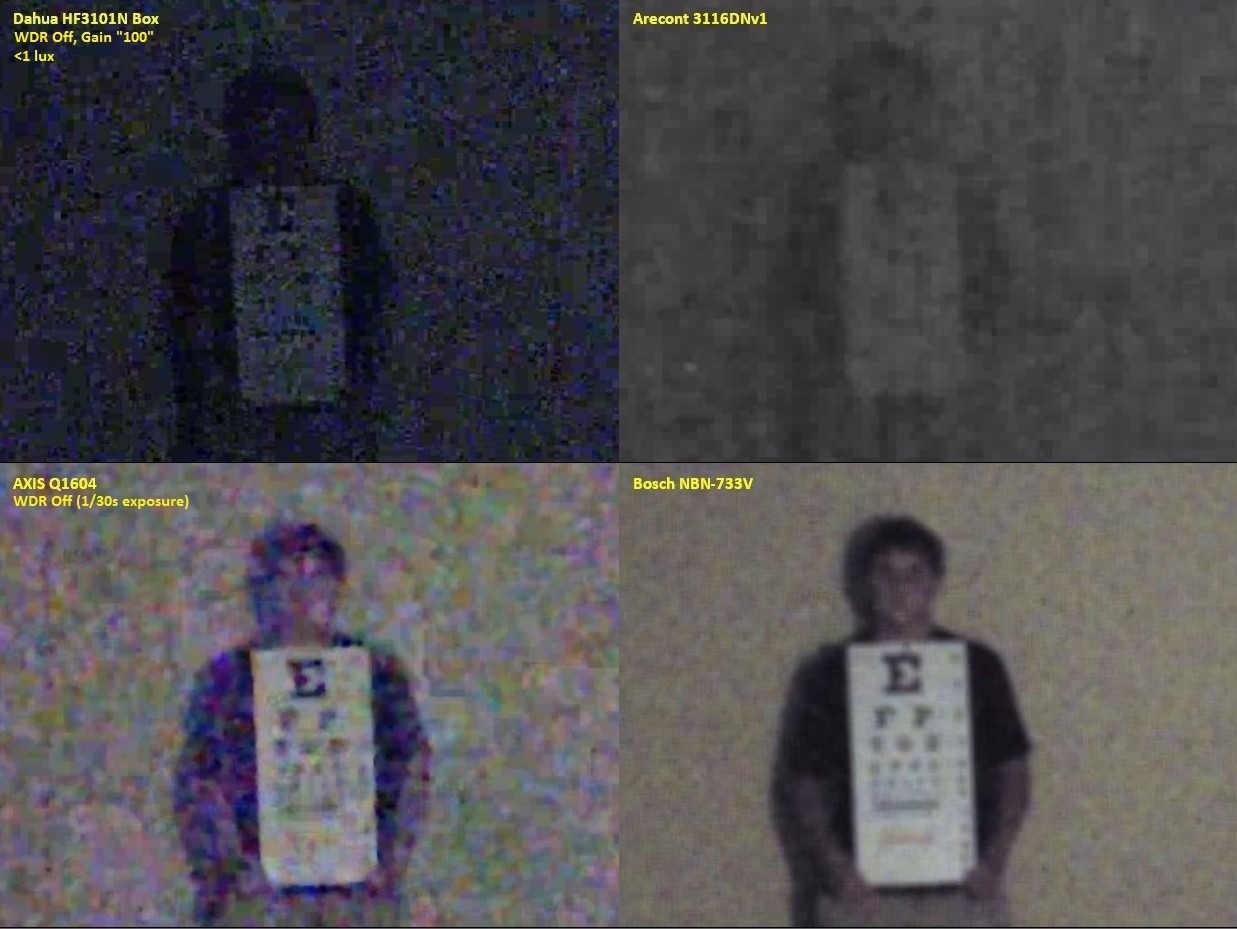 In our WDR scene, against strong backlight, the HF3101N performs well, showing more facial details than the Q1604, and better details of the area beyond the subject, as well. 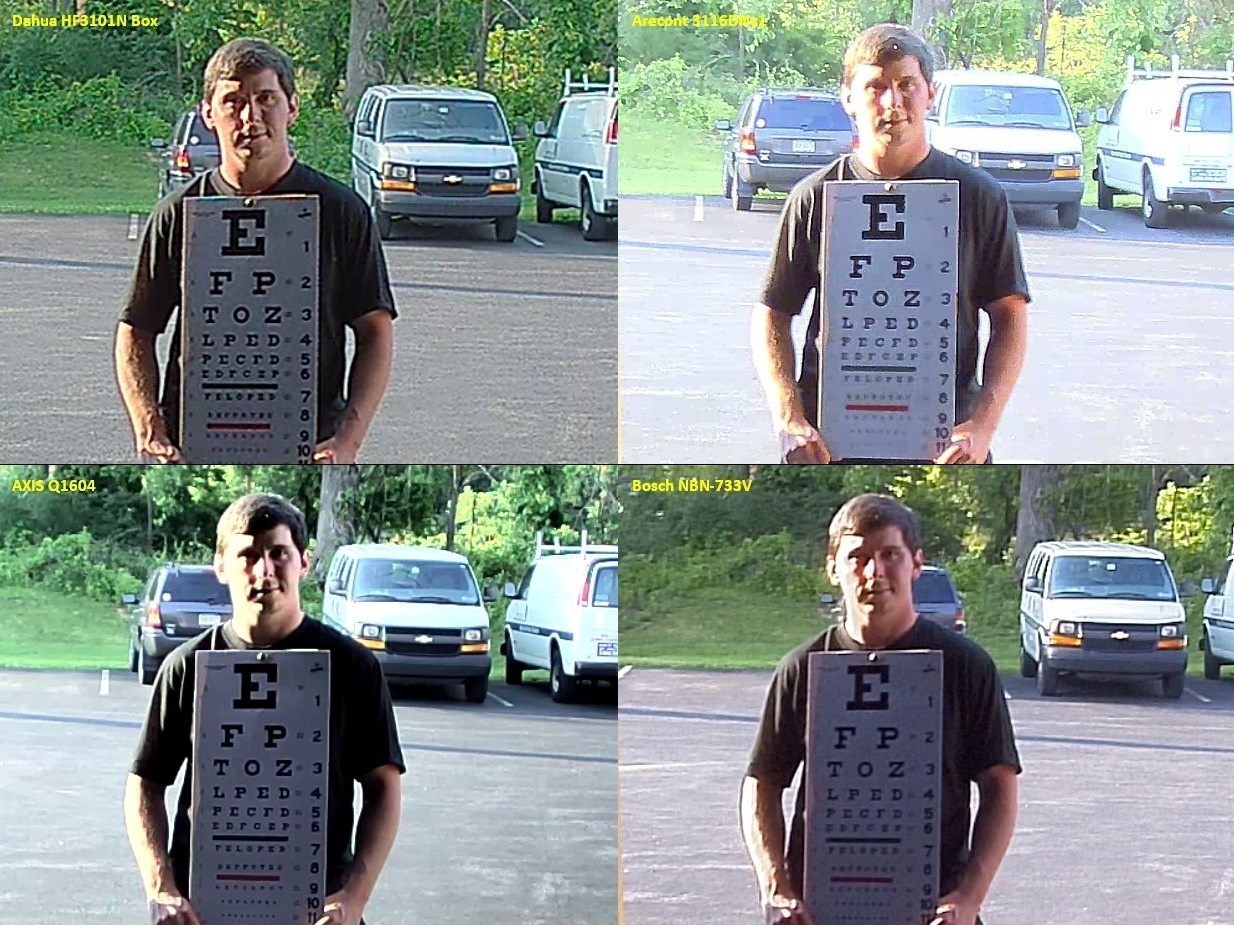 However, in the dimly lit area next to the overhead door, Dahua lags behind all others but the NBN-733V, with background objects very difficult to make out. 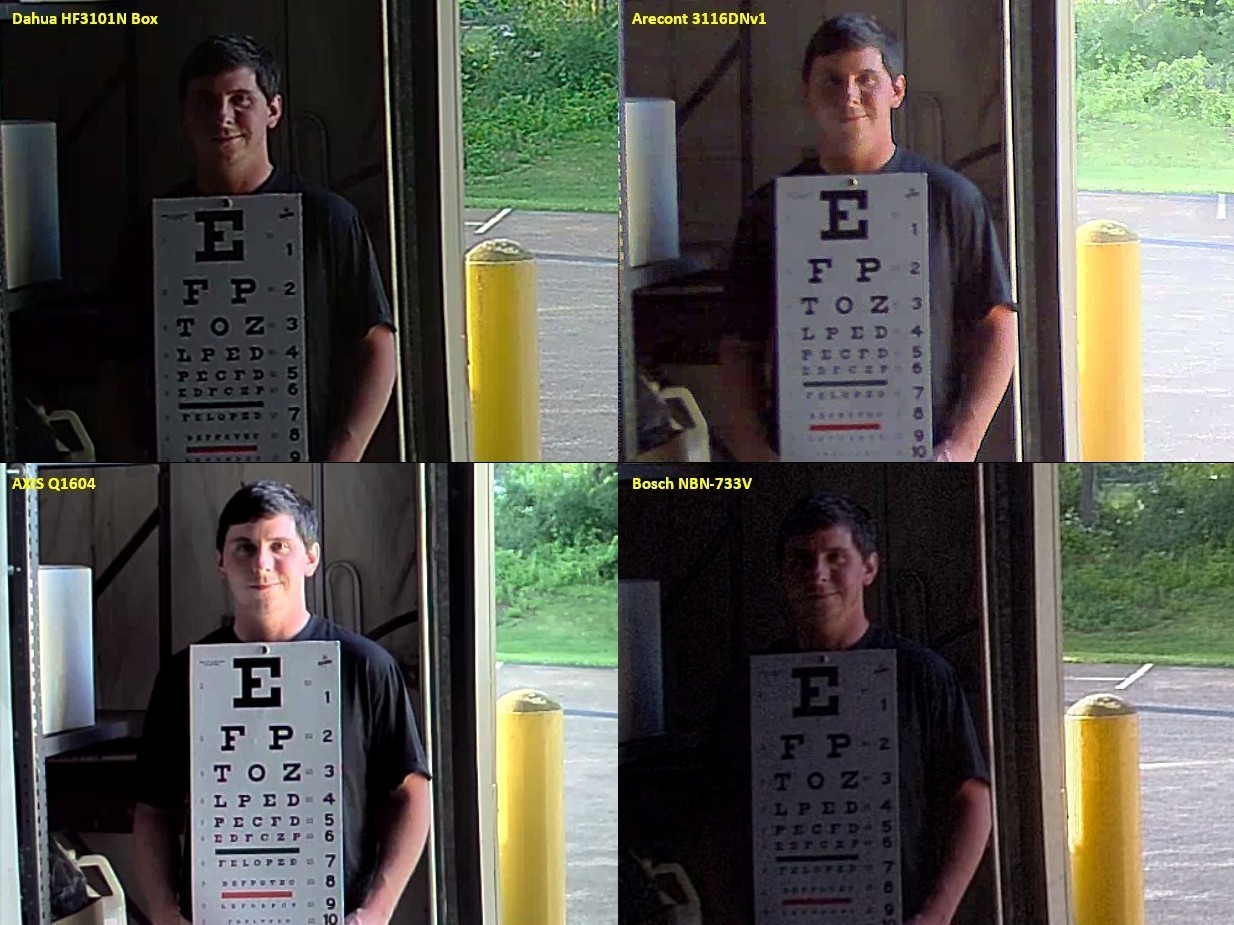 In full light, the HD2100N performs moderately better than the M3004, with less noise an artifacting, making the chart easier to read. 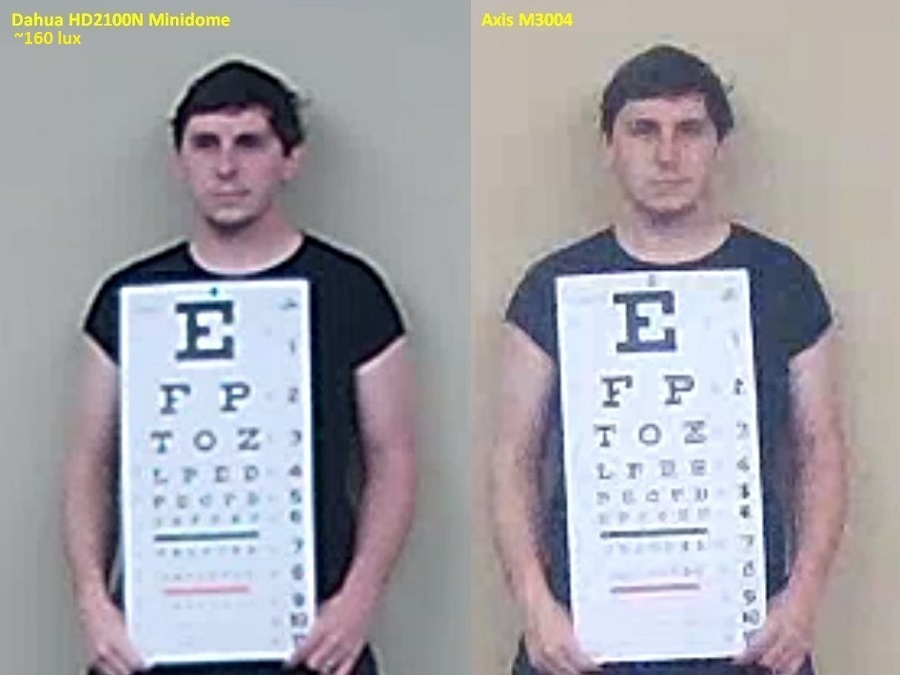 Lowering the light to 2 lux, the M3004 is clearly outperformed by Dahua. The chart is still readable to line 4 in the HD2100N, while only 2-3 lines may be read in the M3004. The subject is also nearly totally obscured by noise in the Axis camera. 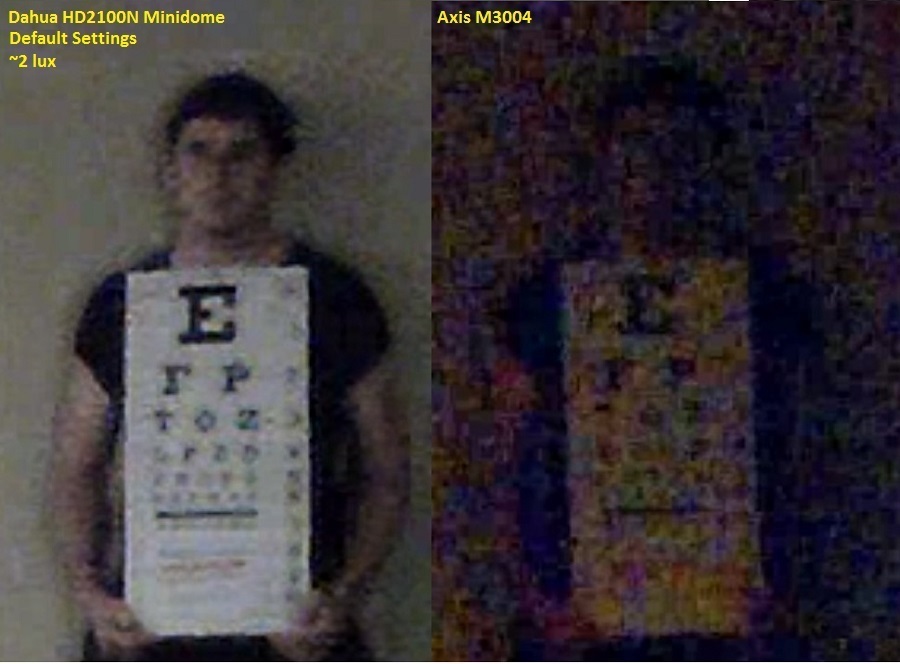 Below 1 lux, neither camera produces much image using default settings. The chart is just barely visible in the HD2100N. 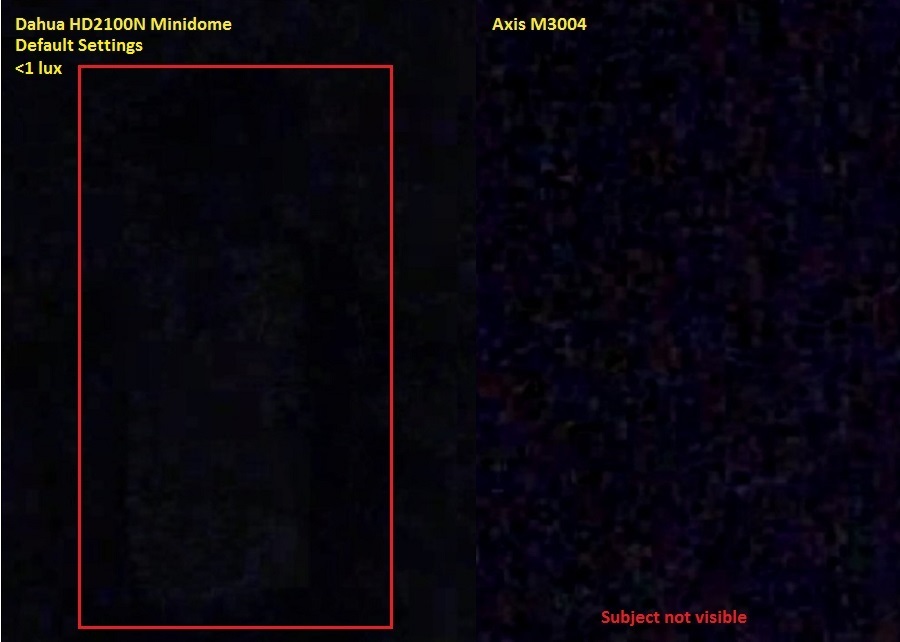 However, increasing gain in the HD2100N, the chart and subject are easily detectable, though no details are available. 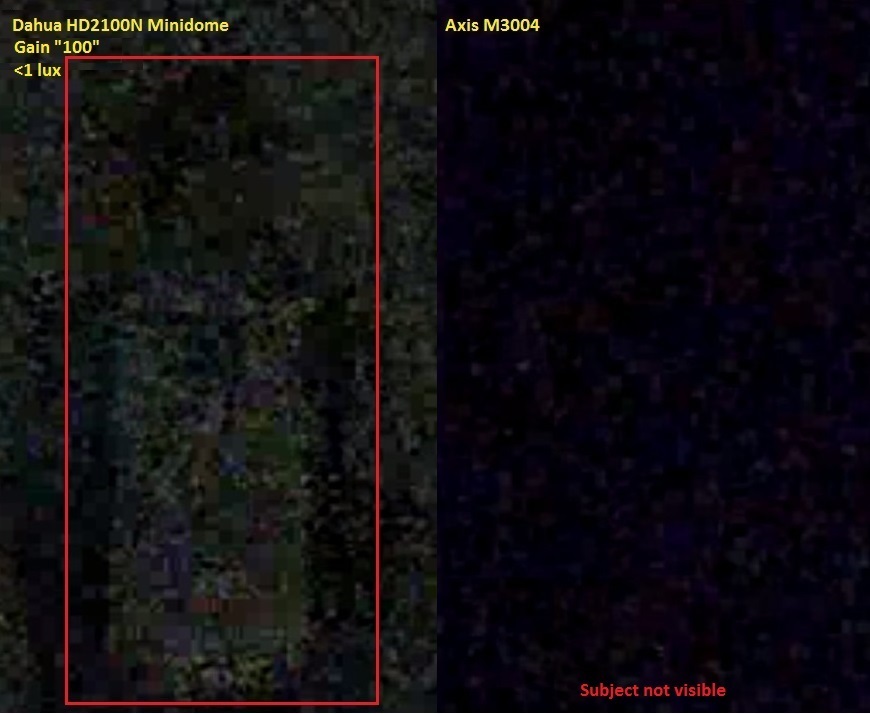 First, we located our subject at 20m, the maximum range cited by the HFW3200SN's specs. It is clear from this image that the illuminator drops off substantially before this range. 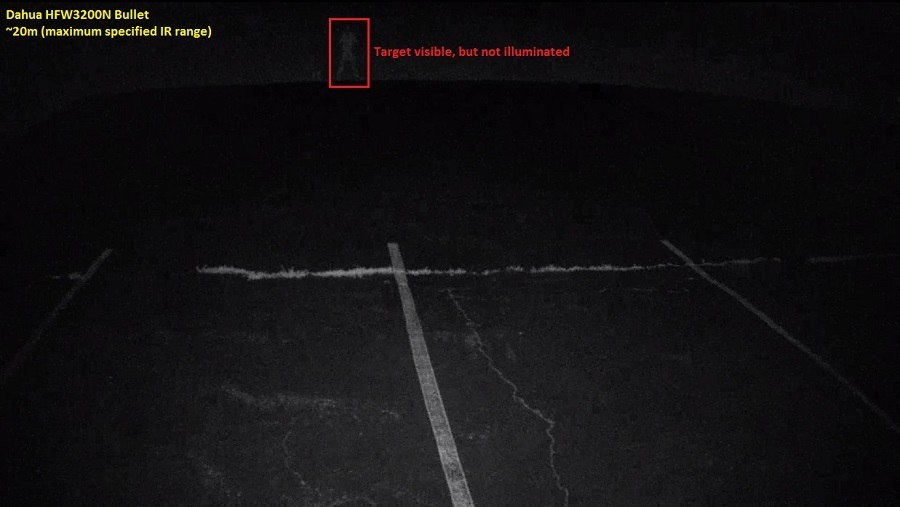 Moving forward, ~13m is the furthest distance at which the subject is clearly illuminated. 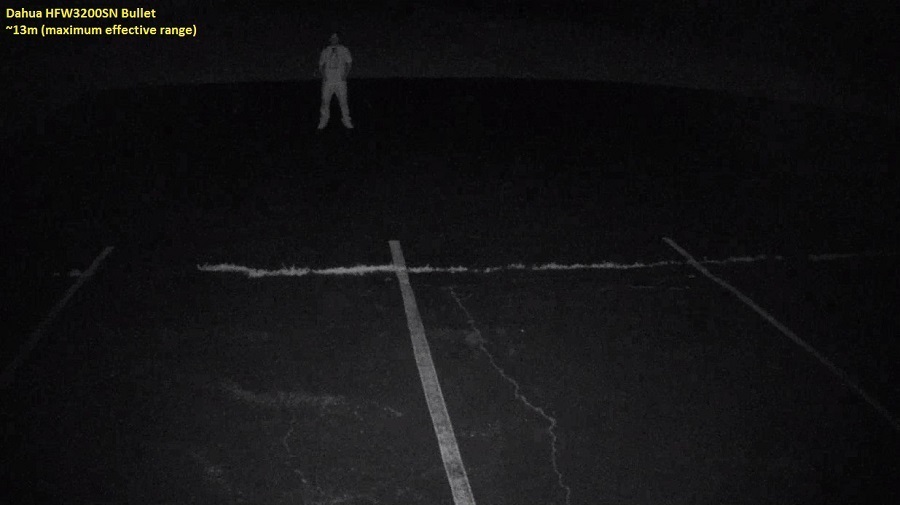 However, due to the illumination pattern being obviously stronger in the center of the image, our subject is much harder to detect at the edges of the image. 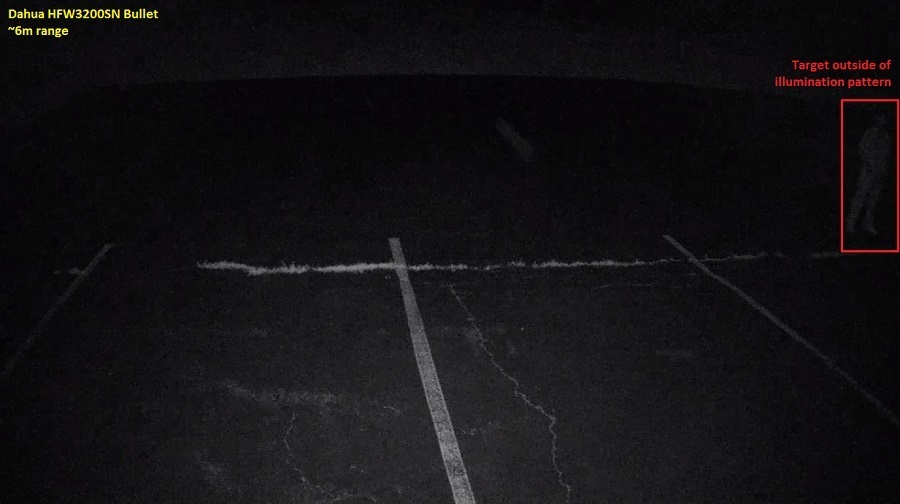 We found that turning WDR on reduced overexposure issues somewhat, though not drastically. It resulted in at most another foot of approach before the subject became overexposed. Note that since this is not true WDR, but instead a digital contrast adjustment, the image was not darkened overall, which is common in low light scenes when using true multi-exposure WDR. 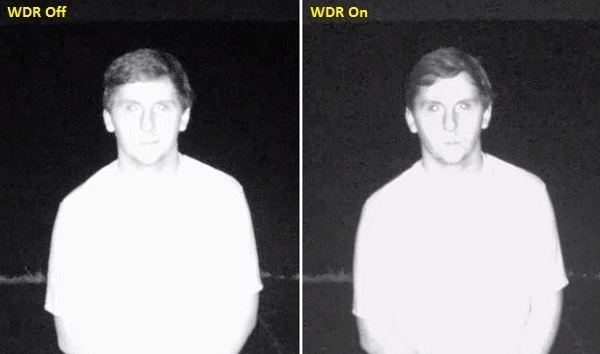 Dahua vs Bosch and Axis 4K Cameras on Mar 02, 2015
4K is here, but not without issues. High prices and poor low light...
Super Low Cost Chinese Camera Shootout on Feb 25, 2015
The 'Chinese' are the industry's #1 threat (or opportunity depending on one's...
Testing Arecont Omni on Oct 20, 2014
The Arecont SurroundVideo Omni is one of the most novel new camera offerings...
Testing HD Lipstick Camera on Aug 15, 2014
Miniature IP / HD cameras are a growing trend. One of the downsides has been...
IP Camera Costs Comparison and Trends 2010 - 2014 on Jun 25, 2014
Over the past 4 years, the average price of 100+ IP cameras surveyed has...
Global Video Surveillance Growth Rates Declining Sharply on Jun 06, 2014
Just a few months ago, recall the hype for the video surveillance market...
Comments (37) : Subscribers only. Login. or Join.