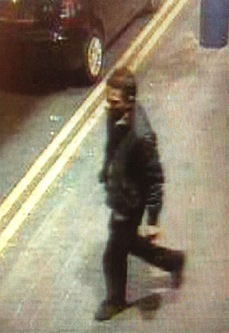 A critical debate amongst surveillance professionals is how high should cameras be mounted. The higher the camera is mounted, the less likely it is to be vandalized, stolen or obstructed. But the higher it is mounted, the more likely image quality suffers as the angle of incident steepens (as shown to the right).

The recommendations vary tremendously. Many say never to mount cameras less than 12 to 14' off the ground (4+ meters). Others say, the camera needs to be as close to human height as possible to get full facial details.

In this report, we put these two competing positions to the test with a series of experiments.

We mounted a camera to an extended pole on our test rig, allowing us to adjust camera height from 17' to 5', as shown below: 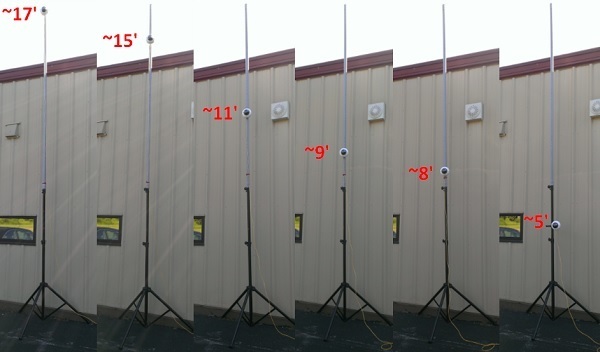 We then positioned a subject at short, mid, and long ranges, in order to see the difference mounting height and resulting angle of incidence made in details captured.

Moreover, we did tests with a subject looking straight ahead as well as walking with their head tilted down, since many people naturally do so, or worse, try to avoid their face being captured on camera. 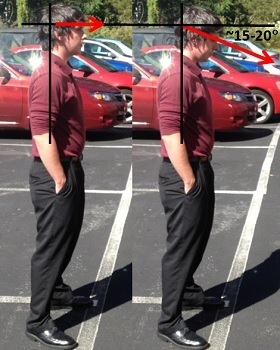 The report answers the following questions:

Here are our key findings from this report:

This image comparison shows the differences in a real life door entrance scenario:

For longer distances to target, mounting height has little impact, and cameras may be mounted higher without practical ill effects.

Based on our close range test, ~15° is the maximum angle of incidence which should be used to capture facial details. Above this, facial details are lost, with only the top of the head being captured.

Using this critical angle, the following table lists the maximum mounting heights recommended to capture facial details of a 6' tall person at varying distances. Note that camera height listed in the table is a maximum value. Cameras may be mounted lower as well. Also note that the consideration of a small tilt of object head significantly reduces the maximum camera height. We recommend the use of a camera height that is about the same height or less than the height of the object to capture full facial details of an object with head tilted down. 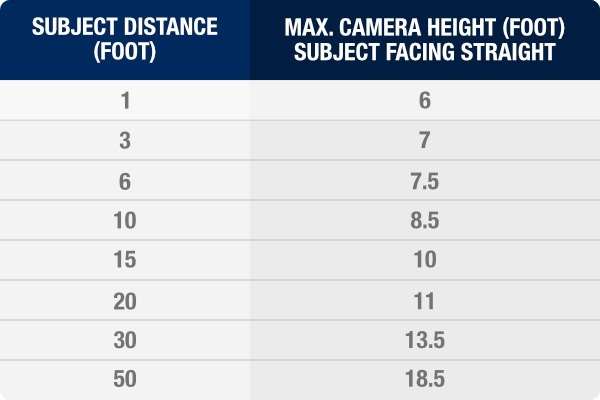 If calculating for a shorter object, for instance a car number plate (~2' off the ground), users should subtract the difference from the maximum camera height in the table above. The same is true of taller objects; simply add the difference.

Note that this table should be used as a starting point only, as it does not consider other factors which affect image quality, such as lighting, resolution, WDR performance, etc. 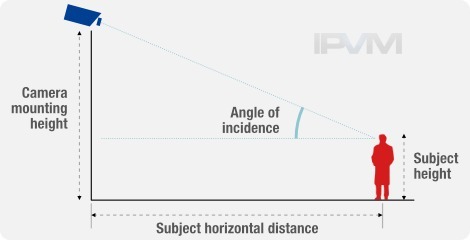 At close ranges, 6' away from the camera in our case, the camera height has the most critical importance. The facial details of the object, who is looking straight ahead, were clearly visible when the camera was mounted at a lower position, from the minimum test height of 5' to about 7'-8' high. When the camera was moved up to 10'-11' high, the facial details became difficult to distinguish due to increased angle of incidence. Further above this height, only the top of object's head was visible, with no facial recognition opportunity.

To better observe the differences due to varying angles of incidence, see this animation below.

A proper mounting height for facial recognition is also dependent on the face direction of the object. When people are walking, they sometimes tend to tilt their head downwards, generally with an angle of around 15-20°, instead of looking straight. Even this small tilt has a significant effect on the angle of incidence, especially at close ranges.

We tested this effect with a similar approach, but with object tilting his head slightly down. This time, angles of incidence will be much higher for the same mounting height. 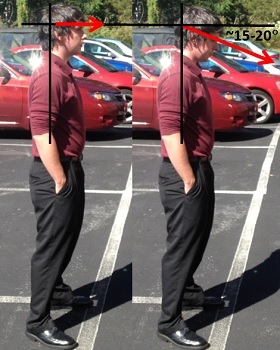 Here are the results at various mounting heights and in comparison with the object looking straight ahead. 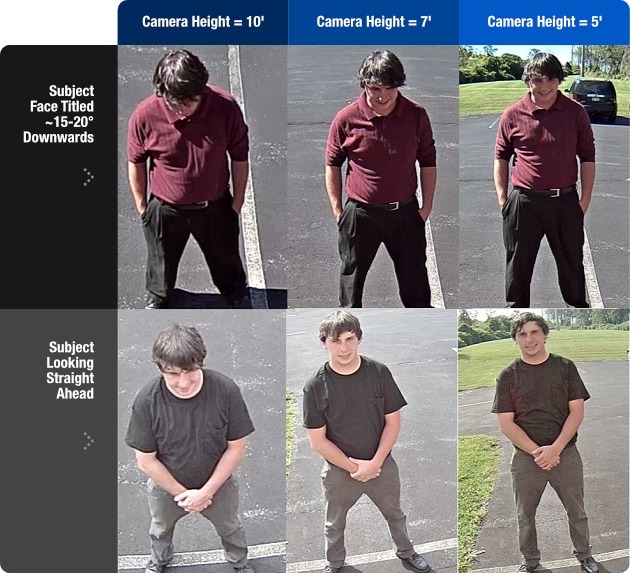 When the object face is slightly downwards, facial details started to diminish just after our minimum mounting height of 5'. These results show that even a 15-20° tilt of object head required the camera to be mounted 2'-3' lower. Only the top of object's head was visible for this case, when the camera was mounted at 8' or higher.

Based on a 6' object, 6' away, we can determine the angle of incidences for various height and object face directions, as follows: 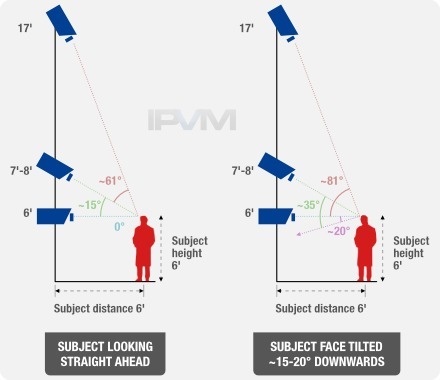 When the object looks straight ahead:

Since the object is very close to the camera, the angle of incidence is very sensitive to the camera height. The angle is varied between direct incidence to about 60°, with a height variation from 5' to 17'. The critical camera height, or the maximum mounting height that can capture facial details, was observed to be around 7'-8' for this case.

When the object head is tilted downwards:

Slight downward tilt of the object head increases the angle of incidence. Above the minimum test height of 5', facial details started to be lost.

The following animation shows these differences as the camera moves down from 5' to 17':

The angle of incidence ranged from 0° at 6' to about 25° at 17' camera height. Since the angles are much smaller than those in the close range, image quality does not change as significantly. 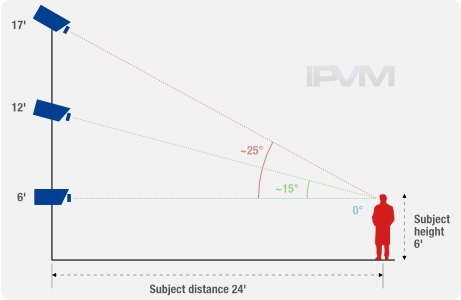 At 48', the effect of mounting height was minimal. All tested camera heights generated almost the same image, with facial details detected similarly. The maximum angle of incidence at 17' high was only 13°, still below the critical angle. Details delivered in this case are reduced due to much lower PPF than in prior ranges, not mounting angle.

This animation shows the difference in details as the camera is moved from 5' to 17':

The maximum angle of incidence obtained at 17' is around only 13°, which is an indication of how small the mounting height affects the image quality for distant objects.

To show a typical real world scenario, we set up the camera near an overhead door and observed our subject walking in, nearly perpendicular to the camera. The image shows the difference in details captured at several heights, with the subject's head tilted slightly down. As we found in other tests, facial details are significantly lost with camera heights above 6'-7'.

Users may download clips of this scenario to see differences for themselves.

Vandal Resistance/IK Rating Guide on Nov 11, 2021
"Vandal-proof" is a term often used by manufacturers to market their...
Video Surveillance Resolution Tutorial on Aug 27, 2021
Understanding video surveillance resolution can be surprisingly difficult and...
Pixels Determine Potential, Not Quality on Dec 17, 2020
More pixels do not always mean higher quality. Many other factors impact...
Camera Pendant Mounting Guide on Mar 07, 2019
It is often necessary to suspend a camera from a high open ceiling. This is...
Mobotix Move OEM Camera Line Tested on Feb 25, 2019
Mobotix has long been criticized for not offering integrated IR, mechanical...
Installing Box Cameras Indoors Guide on May 22, 2018
This guide starts our physical installation for video surveillance series,...
Gas Station Surveillance Best Practices on Jun 07, 2017
Gas stations are a frequent crime target. They tend to be open late at night,...
The PPF / PPM Video Surveillance Guide on Dec 23, 2016
Pixels per foot / Pixels per meter is the most fundamental and valuable,...
Axis Camera Down-Tilt Auto-Measurement on Jan 06, 2015
Tilting a camera too much can create problems. Most commonly, it undermines...
Elevator Surveillance Guide on Aug 21, 2014
Installing surveillance in an elevator can be challenging. Small but wide...
Proper Box Camera Installation on Oct 31, 2012
Bad installations of box cameras are nearly everywhere. Not only does it make...
Comments (17) : Subscribers only. Login. or Join.