With fingerprint readers available for as little as $100, why would you pay more? Consider MorphoTrust's Bioscrypt V-Flex 4G, a unit that regularly costs seven or eight times more than the $100 models. Is it worth the extra cost, and if so, what does the extra expense buy you? 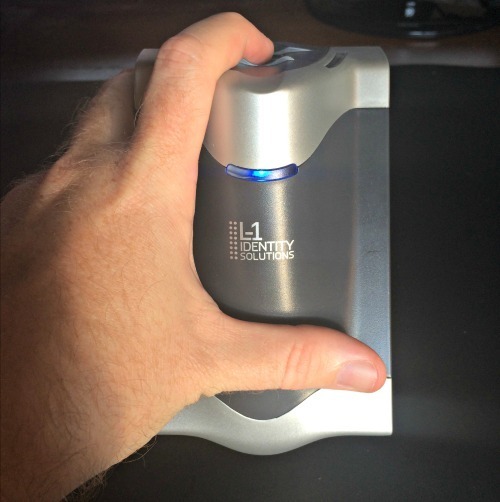 We bought one of these readers, and take a hands-on look at Bioscrypt's basic finderprint in this note that includes 4 videos and our test findings.

The key findings of our test include:

We examine these aspects in the sections that follow.

Here are the feature claims or characteristics we found most important:

The V-Flex 4G we tested was an indoor-only model, but could be used in temperate climates outside if shielded from direct moisture, dirt, and sunlight and is rated for use between 32° and 140° F.  If direct contact with rain, ice, or snow is an issue a water-resistant model is available for about $80 more. Overall build quality of the unit was good and is comparable or better than typical access control readers.

The video below demonstrates the overall construction of the unit, how it mounts, and the general condition of reading a fingerprint:

Initially registering the unit to work on an ethernet network first requires finding the unit by directly connecting through USB, a somewhat cumbersome process we summarize below:

The unit's mounting box is irregularly sized, and may prove challenging to mount on typical electrical junction boxes or recessing into drywall. While lacking an alpha-numeric display, the user simply places a finger on the unit to initiate a read, or is prompted to place fingers on the sensor by yellow LEDs after a proximity card is read.  Overall, even users that have no experience with fingerprint readers will likely pick it up after first being enrolled into the unit.

Registering users into the reader is done one at a time, which may be cumbersome for large systems. However, once a user is built into the unit, the record can be copied onto other networked readers. Enrolling a user's fingerprint takes place in a four-step wizard that can be completed in about three minutes and gives feedback on the quality of each read. The video below details the process:

Here is an example 'Fingerprint Quality' screen, that displays the fidelity score of each reading: 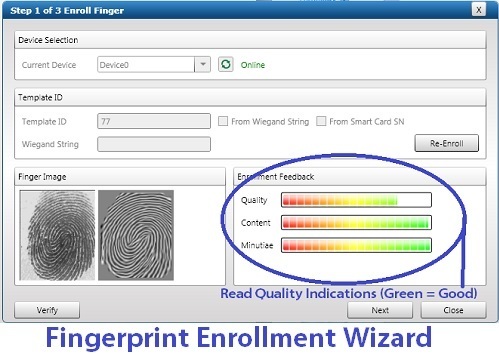 Users have the chance to re-enroll and optimize the print from inside the wizard during the process, facilitating good production use of the reader.

Connecting the unit to an access system, typically to a controller or interface module, can be done by using SecureAdmin's 'Wiegand' configurator. The video below shows how comprehensive the configuration can be, resulting in a fingerprint being received by the parent system as if it were a common credential card.

While the unit's ~$700 pricetag places it at the high end of fingerprint readers, the unit's in-depth configurability might actually mean it is less expensive to integrate into access systems than cheaper but kludgy readers with poor management tools and configurability.

Overall performance turned up no major problems, although the complexity of the unit and the management software could be a problem for 'non-power' casual users.

One member's feedback to us complained about more broad company issues with Bioscrypt:

"The key problem with Bioscrypt is their corporate culture. They are very slow to respond to issues, especially after they were purchased by Sagem Morpho. It appears that their upper management does not care about the customer. No one in my group likes working with them. "

The member also noted that production reader performance is slow compared to other fingerprint readers.