Axis has released the next generation of their advanced video motion detection application, VMD 3.0. It promises improvements in false alarm rates compared to its predecessor, with new features like swaying object rejection, object size and duration settings, and more.

The question is, how does this new version compare to full-blown analytics like the Avigilon H3A analytic cameras? Can it compete while giving users more options in cameras?

We have broken down our key findings into these key areas:

Axis VMD 3 is a free downloadable camera application compatible with many current and past generation Axis cameras. It performs similarly to VMD 2.1, which we tested previously when using default settings. However, Axis has added three advanced configuration options intended to ignore some common false alarm sources:

This setting ignores objects which are in the scene for a short period of time. We found that setting this to 1-2 seconds eliminated many false alarms seen with it off, such as dust particles or leaves blowing through the scene, or headlight reflections from fast moving cars. Using the 30 second maximum threshold on a defined area may also serve as a rudimentary loitering alarm if subjects are typically passing, but should not be stopping.

Using this setting objects under a minimum size are ignored. This may be useful if detection of human subjects is desired, but small animals should be ignored. It may also be used to ignore blowing dust particles or debris. However, users should be careful to not set minimum object size too small, as this may exclude valid human targets in the back of the scene, or those partially obscured.

Finally, sway settings allow users to reduce alarms from objects which repeatedly move only a short distance, such as branches or banners. We found that while turning this setting on did reduce or eliminate alarms from these objects, it greatly reduced coverage range, as much as 50-80% depending on the level selected.

Because of this drastic reduction in range, we do not recommend using this option unless absolutely necessary. It is often possible to exclude regions without swaying objects outright, as many branches may be to the side of the FOV or above the horizon where subjects would not be present. Excluding these regions has no negative impact on coverage in these cases.

We review these configuration options in the video below:

The test scene was selected as it best represented all of the above false alarm issues, with human and vehicle traffic, foliage, and small animals present in a typical commercial application. 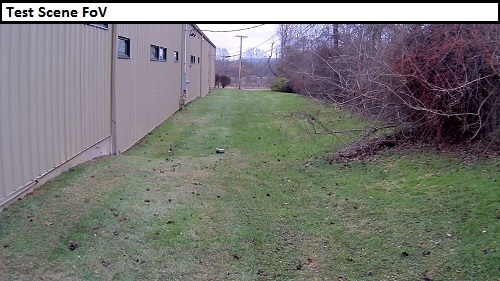 We focused first on the most commonly cited causes of false alarms, such as moving vegetation, blowing leaves, small wildlife, and light changes, and secondarily on detection range. Testing was a combination of active testing with human and vehicle subjects, and passive testing, leaving the cameras in place to check for false activations and detection performance.

Using these settings we saw no issues from other commonly cited issues such as small animals or blowing leaves.

To check its impact on false alarms we set VMD 3's short lived object control to 2 seconds as this matched Avigilon's default settings, and given the size of our test area, a valid object in the field of view would be present for at least this period of time.

Using these settings, false alerts dropped substantially. Alarms from blowing brush and branches were still most common, though at a drastically reduced rate (5-6 per day vs. 8-10 per hour). The image below highlights problem areas which triggered these alarms. 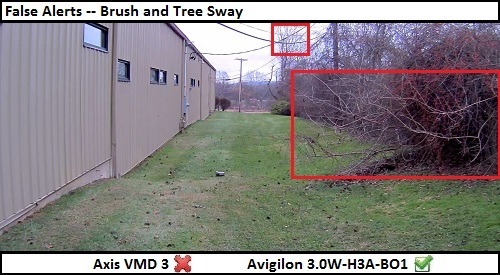 VMD 3 did not activate on either camera due to leaves blowing through the FOV, circled below. The Avigilon H3A camera triggered on these leaves 3-4 times over the course of testing. 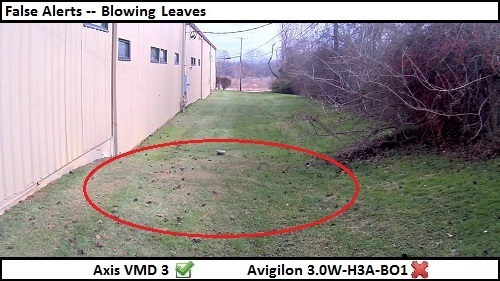 Using optimized settings, VMD 3 was also not affected by reflected lights as Avigilon was at times. The small highlighted area shows the reflection of car headlights from the road nearby, which triggered the H3A camera multiple times over the course of testing. The larger highlighted light occasionally triggered the Avigilon analytics as object passed by, though this did not occur in either camera using VMD 3. 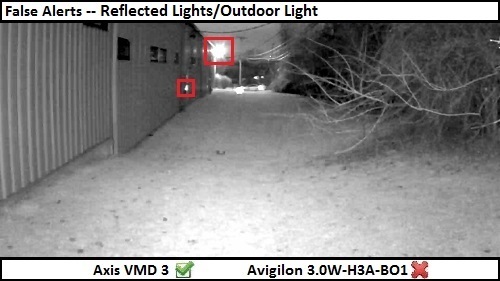 Finally, we tested the cameras against changing light indoors, including opening and closing the door of a dark room, turning lights on and off, and flashlights reflecting on the walls of the scene. None of these issues triggered alerts in the cameras running VMD 3, nor Avigilon. 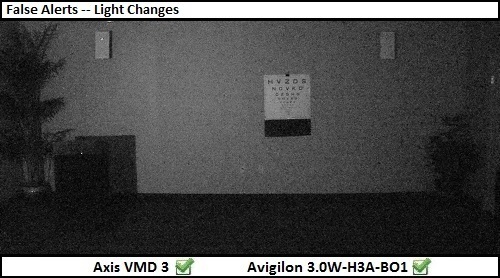 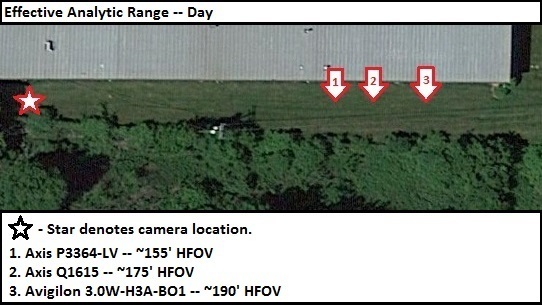 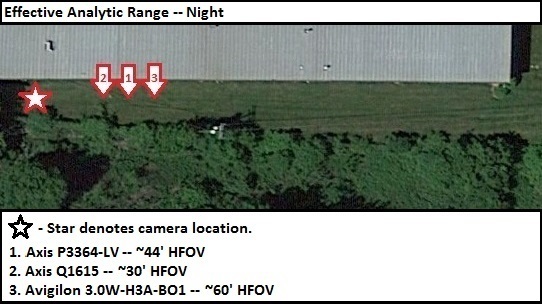 Axis VMD 3, like 2.1 before it, integrates only with Axis Camera Station and Genetec Security Center out of the box. Other VMSes have two potential options for integrating these events:

Many VMSes, such as ExacqVision and Milestone XProtect, accept raw serial data over TCP which may be used to drive events. Users create an event in the camera which sends a specific string upon VMD 3 activation. The VMS listens for this string to trigger recording and/or alerts. This process is detailed in this Exacq support document.

The main drawback to this method is time. Creating event rules on each camera and corresponding actions in each camera and confirming they work properly may take 10-15 minutes per camera. This quickly adds up in even mid-sized systems.

A second option is to configure the camera to trigger a relay output upon VMD 3 alarm. This output is then codnnected to the camera's input. The VMS may then be configured to trigger recording and/or alerts upon activation of the camera input.

Like the serial integration described above, this requires events to be created in both camera and VMS, which can be time-consuming. Additionally, this method assumes the VMS supports the camera's input as an event trigger, and that I/O is not required for any other purpose.

Exacq supports VMD 3 as an analytic (along with other Axis analytic events) in version 7.4 and later. Users may configure the camera to record on VMD 3 using Event Linking, seen here:

Axis VMD4 Analytics Tested on Apr 17, 2018
Axis is now on its 4th generation of video motion detection (VMD), which Axis...
Axis Chinese Competitor Companion Dome V Tested on Jun 29, 2016
A $169 1080p dome from Axis? The Companion Dome V is, by far, Axis' lowest...
Hikvision vs Exacq VMS on Jun 15, 2016
Hikvision and Exacq are two of the most commonly used recorders in the...
Hikvision Video Analytics Tested 2016 on Feb 04, 2016
We tested Hikvision's video analytics on six Hikvision models, ranging from...
Axis Video Analytics Are Weak on Oct 05, 2015
For more than a decade, video analytics has frustrated and disappointed...
Axis Releases Their Own Video Analytics on Sep 28, 2015
After years of promoting third party video analytic applications and...
Axis Digital Autotracking Tested on Sep 16, 2015
As camera resolutions continues to climb, the likelihood that you will ever...
Comments (16) : Subscribers only. Login. or Join.