Avigilon has long marketed itself as delivering 'the best evidence' but until recently they did not have any WDR cameras. However, their H3 release introduced WDR up to 3MP.

Avigilon's H3 series 3MP camera is a competitively priced for its featureset, including auto focus and solid WDR performance. However, those looking for superior low light performance, as well as more advanced features such as on-board storage or analytics should consider other offerings.

For those currently predominantly selling Avigilon, the 3MP WDR model represents a great advance in WDR performance, and a modest increase in low light imaging compared to older models.

We tested the H3's WDR performance against five competitors in our 2013 WDR Shootout. We found that performance was solid in all of our test scenes.

These example images show performance in a garage scene, with an overhead door open with strong sunlight behind the subject (click for larger versions). In this comparison, we can see that the subject's face and the chart are well-lit, and details outside are visible, as well. The H3 is only among the top performers in this scene.

With the subject standing in the darker area next to the door, the chart and subject remain quite visible, more so than in the Bosch, Panasonic, and Sony models, and only moderately darker than the only 3MP competitor, the Arecont AV3116DN.

In this indoor nighttime scene, below 1 lux, Avigilon produces one of the dimmest images among the cameras tested. Note that this comparison shows the Arecont AV3116 with binning turned on. Avigilon outperforms only the Sony CH240 and Panasonic WV-SP509. 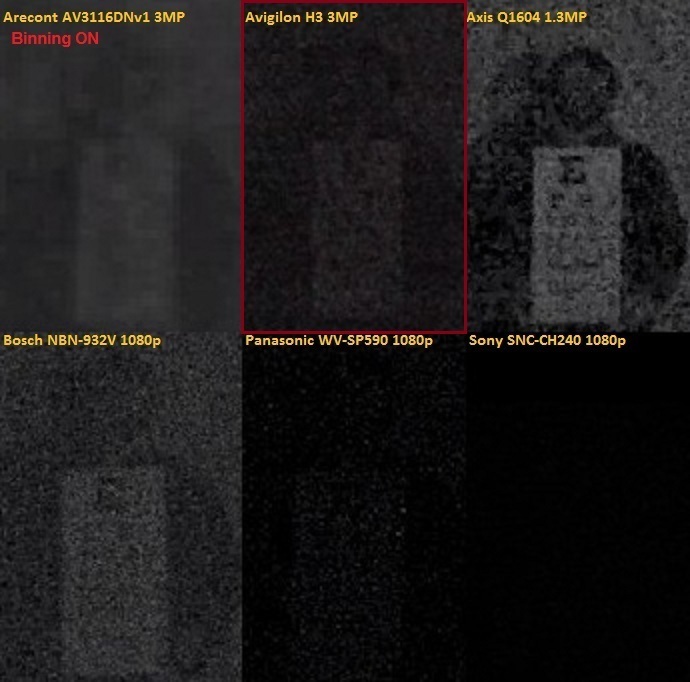 In our indoor, well-lit test scene (~300 lx), the H3 performs well. Colors are fairly true, but slightly oversaturated, as can be seen in the subject's face. Whites also display a slight blue tint. Neither of these issues had a major impact on image quality, however, and could potentially be remedied by adjusting camera settings if need be. 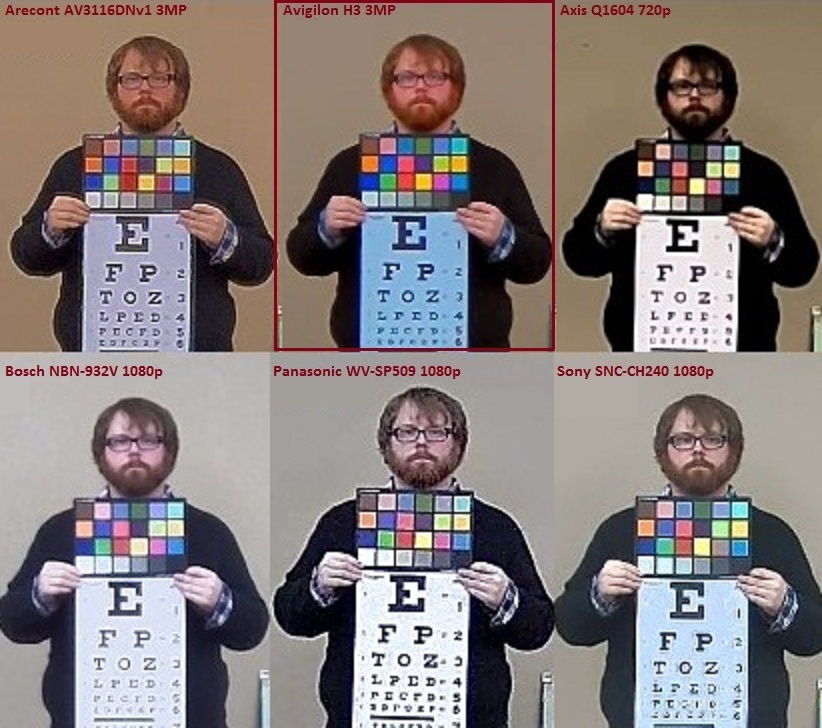 For those using an end-to-end Avigilon system, the H3's image quality will differ, due to Avigilon Control Center's automatic image adjustment features. This adjusts gamma, white, and black levels automatically with the intent of optimizing in the image. In our tests, we found modest improvement to the H3's image during daytime, essentially amounting to a slight white balance adjustment:

However, ACC provided a marked improvement in our low light scene, brightening the image enough that our test chart may be seen, not possible in Exacq or other clients. 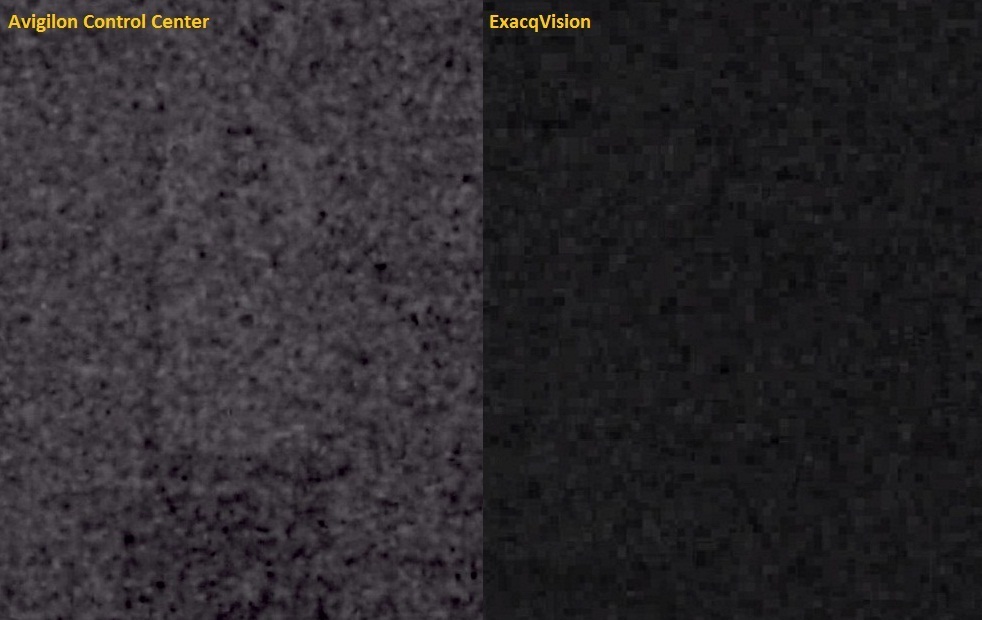 In order to test bandwidth, we set all VBR cameras to their default settings, but increased the cap to 12 Mb/s, in order to provide substantial headroom for the camera to adjust bandwidth accordingly. Note that only Sony's CH240 did not include VBR streaming, so we set its CBR bitrate to 8 Mb/s. In our daytime scene, the Avigilon H3 consumed less bandwidth than most other 1080p/3MP cameras in our test, aside from the Bosch NBN-932V.

However, at night, bandwidth spiked, higher than all cameras aside from the Arecont AV3116DN. However, note that the Axis Q1604 consumed around 9 Mb/s at 1.3MP resolution:

One factor contributing to Avigilon's higher bandwidth consumption is their default compression settings, low relative to many competitive cameras. Avigilon's H3 series defaults to a quality level of "6" in their web interface, which tests determine equates to a quantization level of 24, while most other manufacturers default to somewhere around 30. Left defaulted, the H3's stream jumped to 7-8 Mb/s in our daytime indoor test scene, compared to 2.5-3 Mb/s when adjusted to "15", roughly 30 on the quantization scale, with minimal impact to visual clarity. Nightime bandwidth was impacted much less, with consumption dropping from 10-12 to about 9.5-10.5, meaning aggressive gain control is likely a bigger contributing factor than compression in low light scenes. Users should be aware of this default setting and adjust compression accordingly for their scene.

Avigilon Quietly Slashes H3 Camera Pricing 30-50% on Jun 13, 2016
Pricing has fallen throughout the camera market. But Avigilon has held firm....
WDR Camera Shootout 2015 on May 04, 2015
This is the most comprehensive Wide Dynamic Range (WDR) IP camera shootout...
Avigilon Dirty Tricks on Jan 15, 2014
Avigilon's products are strong but their marketing is consistently and...
Comments (1) : Subscribers only. Login. or Join.