Avigilon's integrated IR cameras claim to now only eliminate IR washout/bloom, but to extend coverage range far farther than any of their competitors. Specifically, Avigilon offers a 9 - 22mm lens option that is rated for 60 meter. Here is an overview of how those claims match up: 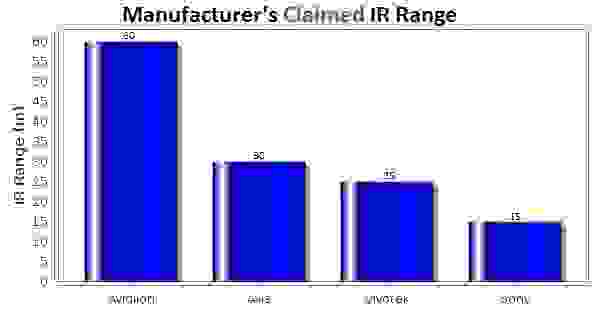 Because of this, we were interested to know how well the Avigilon IR bullets truly performed. So we bought 2 of their 2MP IR bullets, the 'short' focal length and the 'long' 9-22m one, and put them to the test. 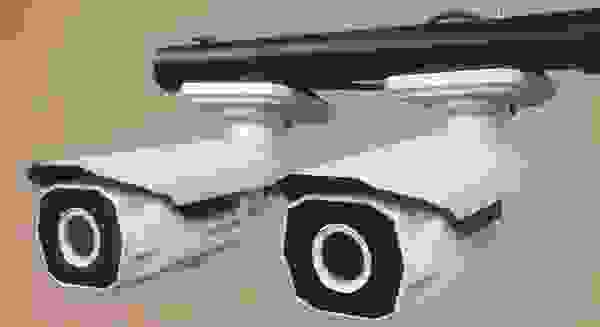 Inside, we break down performance in image quality comparisons and video screencasts.

This pricing is less expensive than many major brand IR cameras, such as Axis, Arecont, and Sony, though on par with Vivotek, and pricier than comparable from ACTi and Dahua:

For night time / low light monitoring, the Avigilon IR bullets are worth considering as they cover a long range and eliminate the blooming / overexposure common in integrated IR cameras. The main constraint is recognizing that the coverage area still falls significantly compared to day time performance.

In an upcoming test, we will match up Avigilon IR bullets with Axis Lightfinder and Bosch Starlight models to see how they compare in low light.

In this screencast, we review the physical features of the HD bullet camera. Of note:

This video reviews the web interface and configuration of the HD bullet camera. The bulk of the web interface is identical to other current generation Avigilon cameras, with the addition of settings controlling the camera's adaptive IR.

We found that adaptive IR resulted in even illumination across the scene at multiple zoom ranges, without substantial hotspots or blooming common in other IR cameras where the illuminator does not match the FOV. Additionally, the IR power adjustment worked well in response to moving objects in the scene in our outdoor tests, adjusting power quickly. This is shown in the following screencast:

In our indoor test scene the effects of adaptive IR on our subject were very limited. With the subject directly in front of the camera, at about 6', there is minimal difference in images with adaptive IR on and off, seen in this example below. 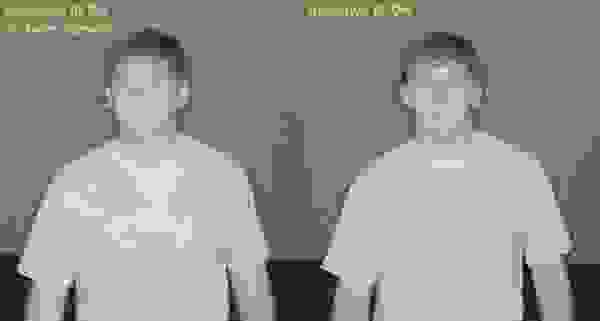 We found Avigilon's actual IR range to be closer to the specified range (30m/60m in 3-9mm/9-22mm models, respectively) than many other cameras/illuminators we've tested. However, at max ranges IR power is weak, essentially suitable for detection only despite relatively high pixel density. We review this in the following screencast:

These images compare each camera's widest and narrowest FOV in both sunny daytime scenes and low light scenes with IR on, to show this drop in image quality.

First, using the 3-9mm model, with the subject at 30m (maximum IR range), the camera is barely able to detect our subject in low light at 3mm. At 9mm, he is easily detectable, but with no details: 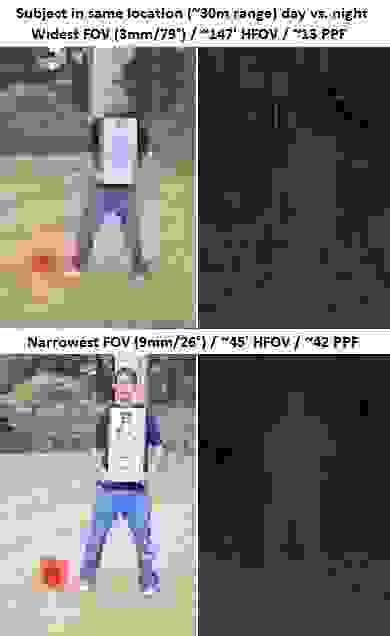 This images compares the 9-22mm model's widest and narrowest FOVs. At 9mm, our subject is detectable at night, with very little detail, making even classification as human or animal difficult. At 22mm, details are improved, with the top line of the chart minimally readable in low light: 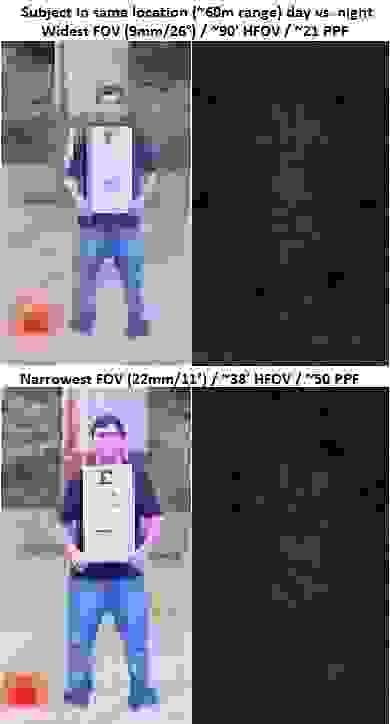 We tested the HD bullet's license plate capture performance by setting it to its narrowest field of view, 11°, about 30m from our test car. With the car moving at approximately 30mph, the license plate was easily readable (ELJ-55**, last two characters masked). Significant motion blur and artifacting made identifying the make and model difficult. 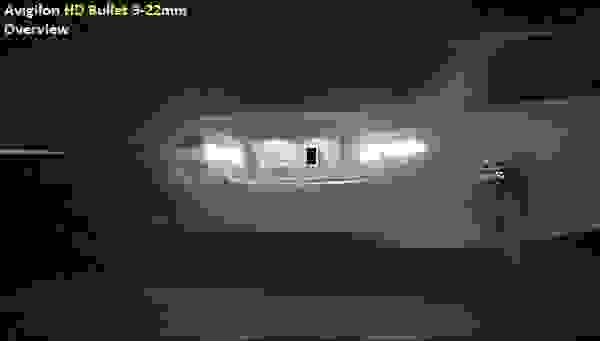 However, despite these issues, the license plate was clear, seen in this image. 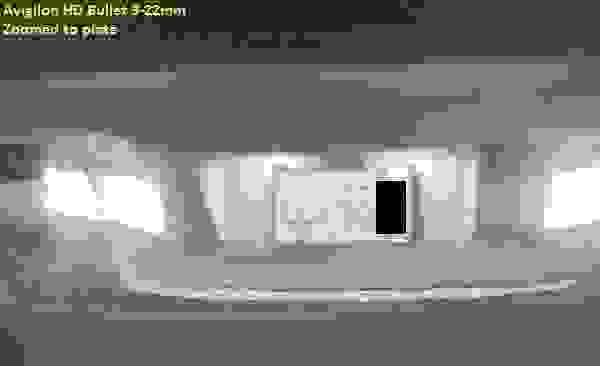 Note that this test was run using default shutter settings (1/30s). Motion blur may be less of an issue using faster shutter speeds, but we have not tested capture performance using anything other than defaults. Users may download a clip of this scene (~13.9 MB).

In full light, the Avigilon bullet is comparable to the non-IR Avigilon H3 series camera, with slightly less saturation. The H3 and Bosch NBN-932V, another current generation 1080p camera, are shown here for comparison.

As we demonstrated in our test of Avigilon's image adjustment features, Avigilon Control Center may provide modest improvements to low light performance. Due to these adjustments, at maximum IR range (60m), detection performance is improved, as can be seen in the comparison below. However, enhancement is modest, with no additional identifying details available. 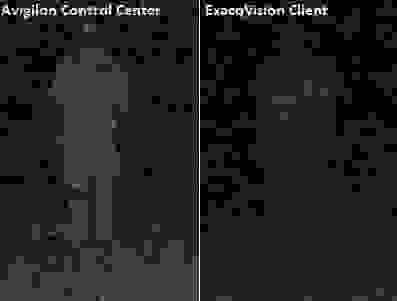 This daytime image shows both cameras at their widest field of view, 3mm and 9mm, respectively, with the subject located 30m from the camera (click image for larger version):

This image shows each at their most telephoto, 9mm and 22mm, with the subject 60m from the camera:

The HD bullet's IR illumination significantly reduced bandwidth both indoors and outdoors. In the following comparisons, note that Avigilon uses VBR encoding with a cap with a maximum value of 12 Mb/s.

Outdoors, below 1 lux, we measured the following averages:

This equates to an approximately 40-50% reduction in bandwidth.

Indoors, again under 1 lux, bandwidth reduction was greater, due to the more reflective area. Bandwidth dropped by as much as 80% with IR on:

Finally, we measured bandwidth in our indoor scene in full light to provide a baseline of bandwidth. In this case, bandwidth is near equal to the Avigilon H3 box camera, though higher than Bosch:

The Super Low Light Shootout 2016 on Mar 28, 2016
How good are surveillance cameras in low light? With the advances in...
Exacq vs Avigilon on Jun 17, 2015
A member requested: "I need to find some IPVM info on Exacq vs. Avigilon. I...
Milestone LPR Tested on Mar 31, 2015
How well does Milestone's LPR work? Milestone's LPR supports off the shelf...
Avigilon Dirty Tricks on Jan 15, 2014
Avigilon's products are strong but their marketing is consistently and...
Comments (23) : Subscribers only. Login. or Join.