Should you be using 20MP cameras? Once considered science fiction, 20 Megapixel cameras are now a reality for the video surveillance industry. This year, Arecont Vision announced a 20MP camera [link no longer available]. That camera is now shipping so we bought a unit to find out how well it worked and what hidden problems it had.

Arecont Vision is making a number of audacious claims for this 20MP camera including that it "can replace up to 65 conventional cameras" and that "one megapixel camera can view an entire parking lot ... taking the place of several PTZ cameras." Arecont has also added "binning for increased security."

Equally importantly, the Arecont camera is cheap. On a per pixel basis, it's actually cheaper than the $100 HD camera from Ubiquiti and that's saying something. Plus, like other Arecont cameras, it is designed to work with leading 3rd party VMS systems. Finally, it's H.264, rare for a camera with such high resolution.

Clearly, the Arecont 20MP has a lot of potential.

On the other hand, Arecont Vision was recently and overwhelmingly selected as the IP camera integrators have had the worst experience using. As such, Arecont cameras come with significant risk.

We did a series of tests to better understand the tradeoffs and competitive positioning of the Arecont 20MP camera, including:

Here are the most important lessons we learned from field testing:

Let's start first with what we see as core advantages of the camera:

One commonly cited logistical advantage we do not agree with is savings on trenching and eliminating putting cameras on different poles. The reason designers put cameras in different locations is to get optimal angle of incidents to targets. Super high resolution cameras do not eliminate this need. Indeed, they can actually reduce security quality when trying to capture everything from a single spot.

Now, let's go to the disadvantages we found with the 20MP AV camera:

Because of the bad low light performance, this camera's best fit is for indoor applications with controlled artificial lighting. Because of the very low frame rate, this camera's best fit is as supplement overview shot that complements traditional surveillance cameras covering key spots. We can see this camera as very useful in retail providing a low cost yet broad visual overview of a store used in conjunction with cameras at the entrance and at cash registers.

We do not recommend using this camera as a PTZ replacement due to its limited range (relative to PTZ optical zoom), poor low light performance and low frame rate. However, we do believe it makes a nice complement to PTZs providing a constant record of a scene (at least during the day).

For those wanting a 180 or 360 offering, we recommend considering the Arecont 8MP version [link no longer available] as a potentially better real world alternative. While the 8MP has 60% less pixels, that deficiency will not make a big practical difference even during the day when additional pixels have the most value. However, the 8MP has a higher maximum frame rate (spec'd at 5.5 vs 3.5 for the 20MP) and, we would presume, better low light performance than the 20MP version. Finally, the 8MP version costs a few hundred dollars less (~$1400 online vs ~$1700 online for the 20MP).

Finally, make sure to check specifically for support of this camera on your preferred VMS. Because of the binning mode, just because a VMS supports Arecont cameras generally does not guarantee that they support this specific series and the default binning mode.

The video below reviews the physical setup of the Arecont SurroundView camera. We cover panning, tilting and most importantly (1) adjusting the focus and (2) being aware of connectors disconnecting during panning.

In this video, we look at (1) limitations in how to display the AV 20MP in a VMS and (2) the impact of the binning mode on VMS integration:

Let's start with low light at near dark 0.2 lux. As we do in all low light test, we normalized the shutter speed for all cameras to 1/30s so no cameras could 'cheat' with a longer exposure. 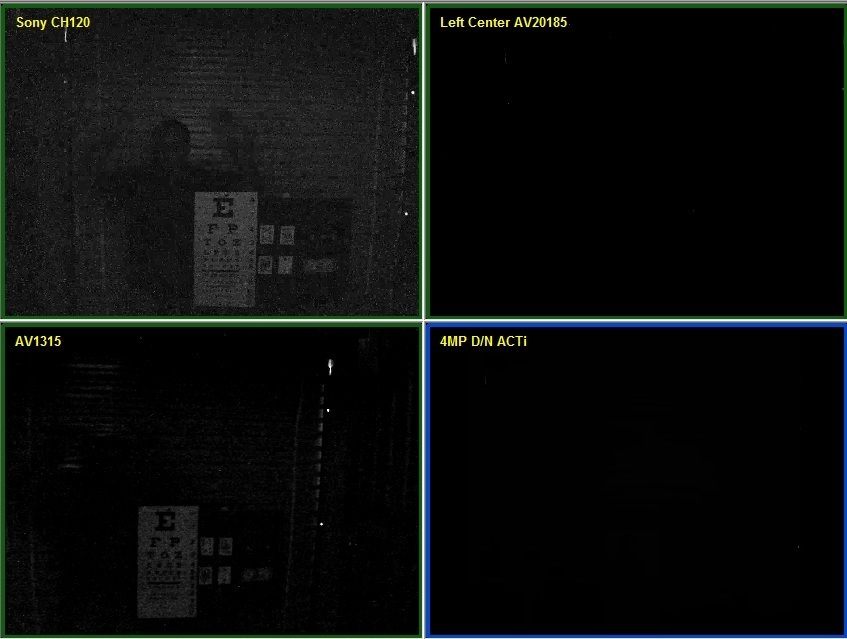 At 0.2 lux, it did not matter if the camera was in binning mode (1.3MP per imager) or not (5MP per imager). They were both pitch black.

Now, in the image below, we show the results of a 1 lux test. The 1.3MP cameras now show significant details but the higher resolution cameras on the right only show the highly reflectant eye chart but nothing of the subject. 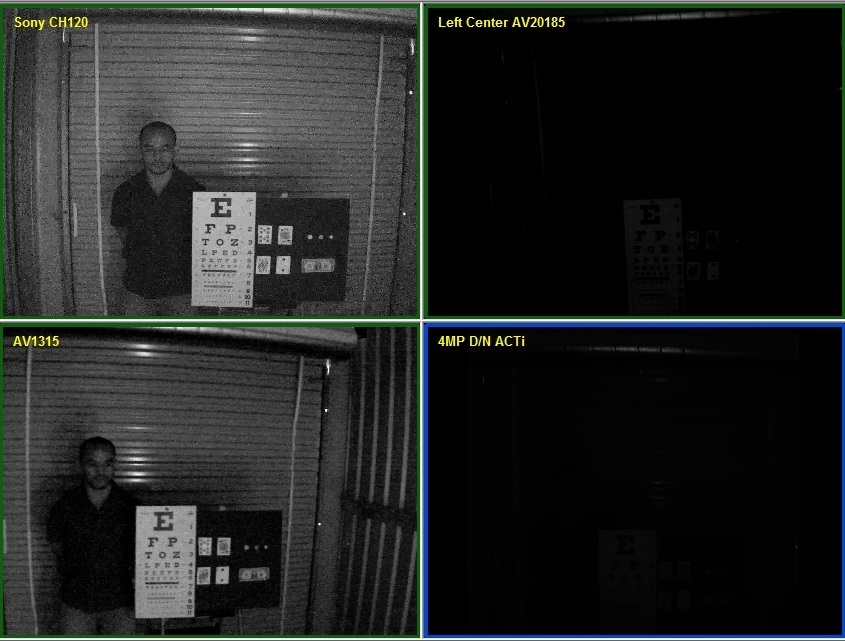 Now let's look below at the cameras at 2 lux. The 20MP Arecont is finally beginning to show most of the scene however the test subject is still mostly dark. 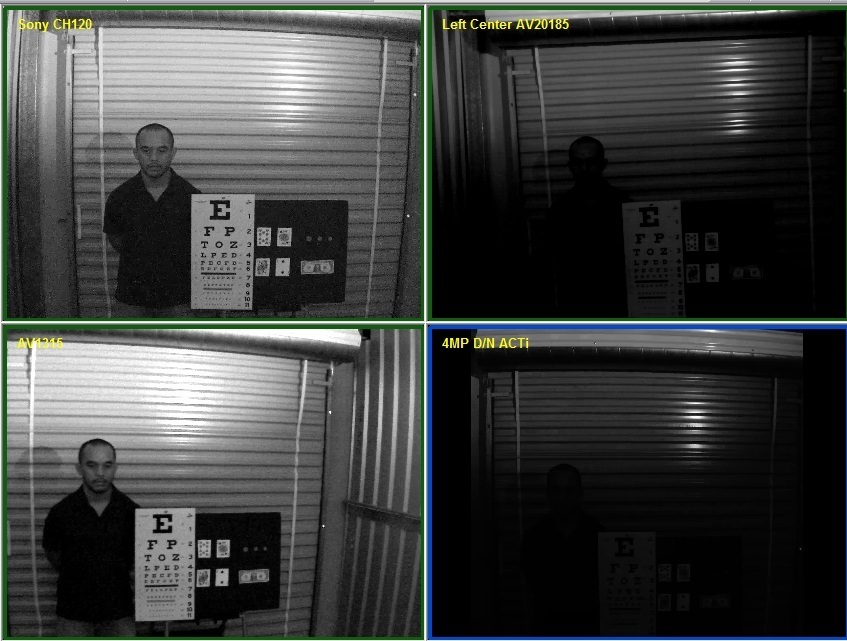 The image below shows that when binning is turned ON, the image quality is only modestly improved. If you look closely at the eye chart, the Binning ON (1.3 MP per imager) version has less visible noise than Binning OFF (5MP per imager). However, the big positive is that bandwidth consumption dropped 60% from 1Mb/s to 400 Kb/s while frame rate jumped by 500% (from ~2fps to ~10fps). Binning is definitely worth doing but does not make the image quality or 'brightness' anywhere close to a real 1.3 MP camera.

Below are the results from 6 lux, a light level with fairly significant light. This is the first level where the Arecont 20MP shows a fairly clear and clean image. The subject is still darker than in the 1.3MP camera but the image is clearly usable. 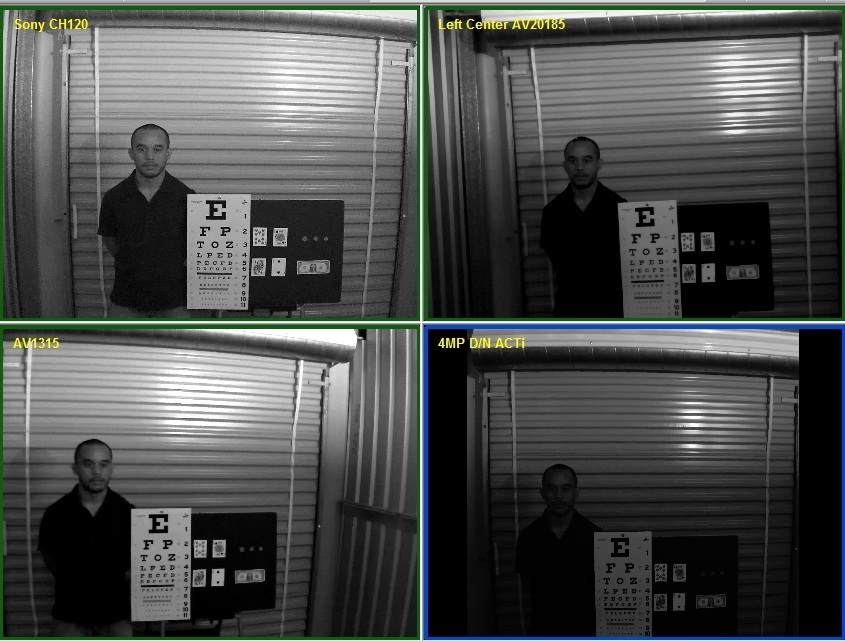 The potential weakness of fixed cameras, including the Arecont 20MP versus PTZs is always an issue of maximum range. If a subject or suspect is too far away, any fixed camera, regardless of the resolution may be incapable of rendering the necessary details.

The image below and specifically, the red boxes, show a spot about 200 feet away that we want to zoom in on.

The next image shows, on the left, an optical zoom for the PTZ and a digital zoom for the 20MP AV camera. While the PTZ shows the details letter of the sign, the text displayed on the AV 20MP image is illegible.

We repeated this process for a human subject about 200 feet away on the other side of the street again zooming into the areas displayed on the red boxes below.

As the image below show, on the left, the optically zoomed PTZ clearly and crisply show full facial details while, on the right, the 20MP AV only shows an outline of the subject's clothes.

Next, we take a look at using the 20MP versus a 1080p Bosch camera with a Theia super wide angle lens. As the image below demonstrates, the Bosch/Theia combo captures about 2/3rds of the total FoV of the 20MP Arecont. The 20MP clearly has an advantage in total coverage area. However, the Bosch/Theia is displayed in a single pane inside the VMS and is easier to use / zoom than the Arecont which is fragmented across 4 individual input/VMS panes. 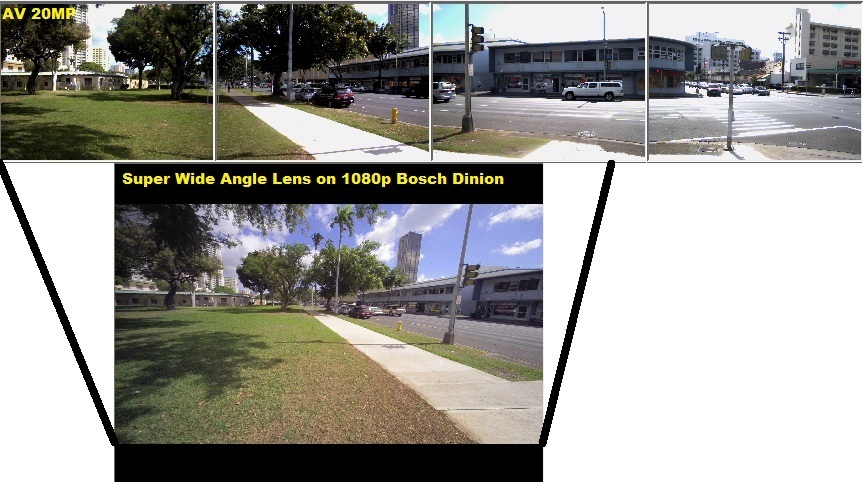 More importantly, as the image below shows the 20MP Arecont captures far greater detail than the 1080p Bosch with the Theia lens. This is clearly a result of the Arecont's greater resolution. However, the narrow FoV of each individual 20MP AV imager also plays a role because Arecont can individually adjust the exposure for different segments of the 180 degree FoV.

Three other important aspects should be kept in mind when comparing wide angle lenses to Arecont cameras:

There are important advantages and disadvantages that cut both ways so it's not easy to simply say one is better or worse than the other.

Since the 20MP Arecont is comprised of (4) 5MP cameras, we wanted to see how much of an improvement they provided against regular, individual MP cameras. In the following tests, we took 1.3MP cameras and matched up their FoV (45 degrees) with one of the 4 Arecont imagers.

The first image below, of an eye chart in a 10 foot wide FoV, with even bright lighting (120 lux) shows moderate but clear advantage for the 20MP AV camera. The biggest difference is clear in the Queen of Diamonds that the 20MP AV renders much shaper and more detailed.

Next, we look at the same scene and lighting with a human subject. All 3 cameras produce effectively the same level of details. However, this is primarily a factor of the narrow FoV which minimizes differences between cameras of varying resolutions.

To better understand real world differences we conducted tests outdoors. In the image below, the subject is about 200 feet from the camera (in the same spot used for the PTZ comparison). While the 1.3MP only displays a blob of a person, the 20MP AV shows a clear outline of the subject. It's not 400% better but it is better.

Finally, here's another example at an intersection about 100 feet away from the cameras. Here the gap in performance is less pronounced though the 20MP AV still captures slightly more details. This scene had greater sunlight and we suspect that the increased sun diminished the performance difference.

Finally, in both indoor simple tests and outdoor complex tests, frame rate tended to average about 1.5 to 2fps. This is compared to 3.5fps specified by Arecont Vision (technically it is listed as 'up to 3.5fps'). You can see for yourself by watching the video exports of a simple scene with arm waving and a complex scene with cars driving through an intersection.

Arecont 20MP Camera Examined on Apr 05, 2011
Arecont Vision has announced a 20MP camera. This would be the highest...
Comments : Subscribers only. Login. or Join.