The Arecont SurroundVideo Omni is one of the most novel new camera offerings in the past few years.

Like their 180 and 360 predecessors, the Omni supports 4 imagers / cameras inside. The major advance is that the imagers can now be repositioned and the lenses can be changed.

Below is a screenshot from our test, showing us repositioning an imager inside the Omni: 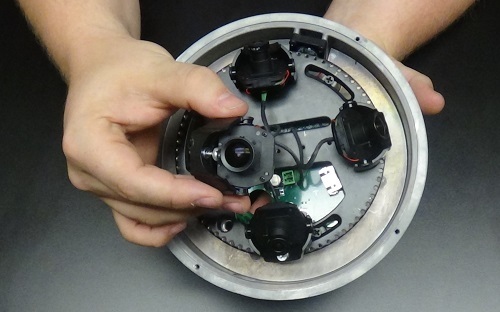 However, many are reluctant given Arecont's poor track record / reputation.

We bought the 12MP Omni model, the AV12176DN, and tested it in a variety of scenes to see if it was worth it plus to know the following:

The AV12176DN-28 (with four 2.8mm lenses) sells for about $1,400 USD online. However, viewing the imagers as four separate cameras, pricing drops to about $350 each. Additionally, only one VMS license, cable drop, and switch port is needed, further reducing relative cost. However, this is still moderately more expensive than many low cost cameras, which are available for $200 or less and include integrated IR.

The 12MP SurroundVideo Omni is a novel concept, allowing large areas which do not fit typical 180 or 360 fields of view but may be expensive to cover using multiple single imager cameras.

However, users should ensure adequate light (over 1 lux) is present if nighttime performance is a key concern. Below average WDR performance limits its use in areas with harsh differences in lighting, as well.

Finally, those considering the Omni should beware of potential bugs (unfortunately typical in Arecont cameras) such as stuck IR cut filters, low framerate or dropped streams when viewing in a VMS as well as the web interface, or strange white balance issues.

Compared to other domes, the SurroundVideo Omni is wider, but the dome itself is flat, in order to accommodate the image sensors in various configurations. We review the physical construction of the camera in this video: 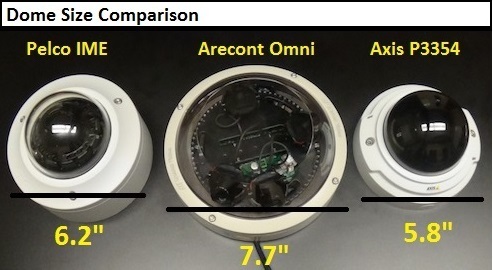 However, the camera is relatively short, just over 3.1" tall, due to the flattened dome design. This makes it fairly short in relation to most domes.

The four individual image sensors are independently positioned using a ring of threaded holes in the dome's mounting plate. Lenses (M12 mount) are changed simply by unscrewing the current lens and screwing in the new one.

During testing, we found it easiest to position imagers with the camera in place, instead of trying to determine how they should be aimed and mounting them before placing it. The magnets can be used to rough aim the camera and determine exactly which mounting point is best.

The positioning process is shown in this video:

The following scenes show just a few common examples of where the SurroundVideo Omni may fit, both indoors and out. 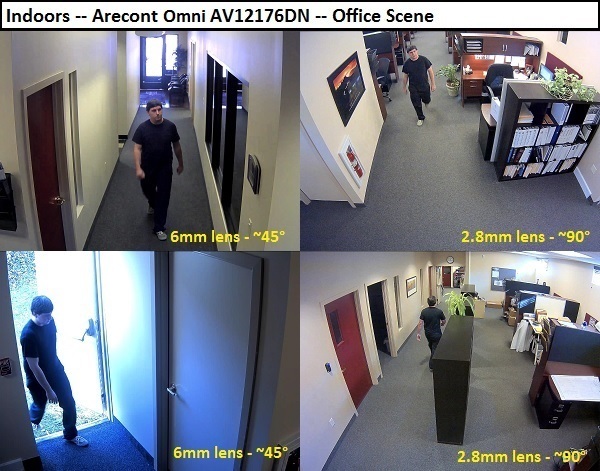 This image shows the setup of the imagers for this scene: 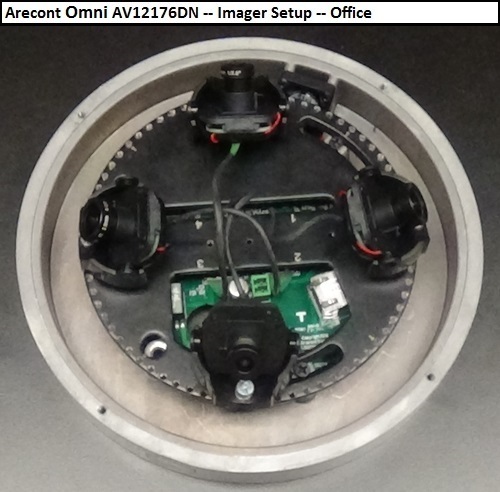 Here, three 2.8mm lenses are used to capture the larger parking area in about a 270° pattern, and a single 6mm lens is used for more details of the entrance and smaller, more distant, visitor parking area. Download this scene (~85 MB Windows .exe). 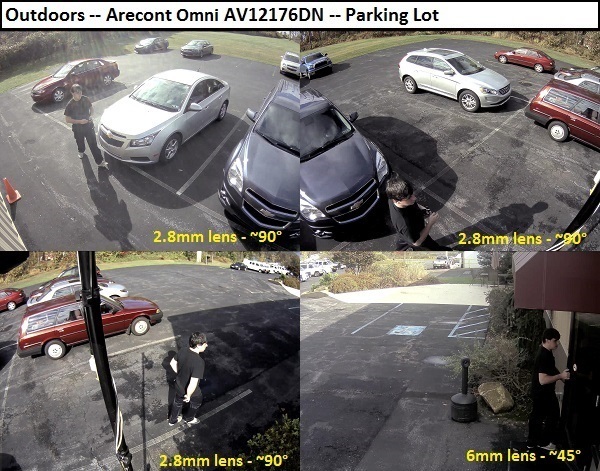 This image shows the setup of the imagers for the parking lot scene: 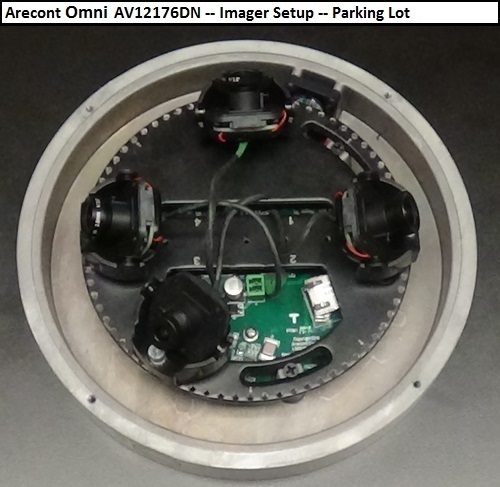 Finally, in this example, two 2.8mm lenses are used to cover the two overhead doors while two 6mm lenses (a total AoV of ~90°) cover the vehicle parking across the lot. Download this scene (~71 MB Windows .exe). 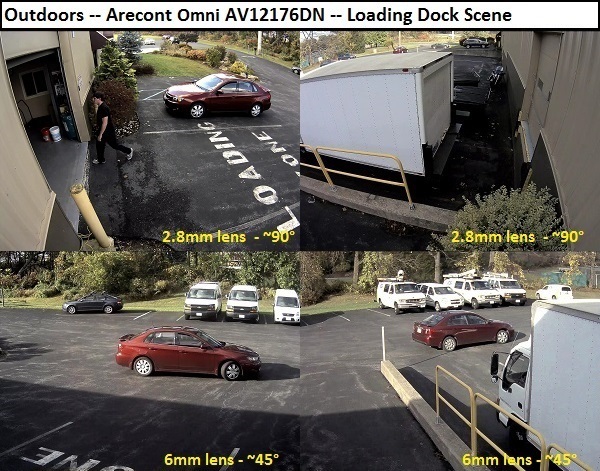 This image shows the configuration of the imagers in this scene: 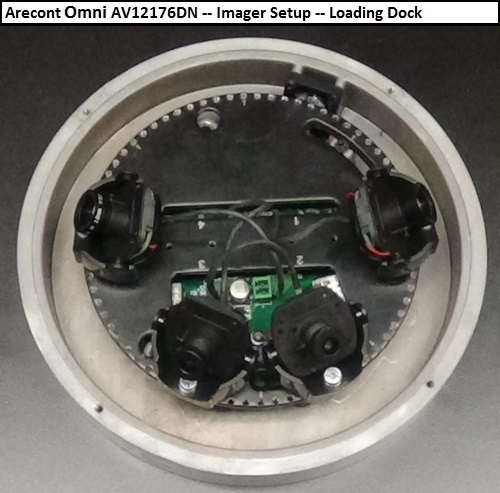 We tested the Omni against other WDR cameras as well as panoramic cameras to test imaging performance in multiple scenes.

For the interior conference room scenes, the AV12176DN was configured in a rough 180° field of view to show differences versus single imager panoramics (Axis M3007 and Hikvision DS-2CD6362) set up in 180° mode as well.

In full light, the AV12176DN performs very similarly to the 3MP single imager Arecont AV3116DNv1, with details clear, but slight desaturation. Note the much higher details delivered compared to the single imager Axis and Hikvision cameras, which provide only the first line of the test chart and rough subject details. 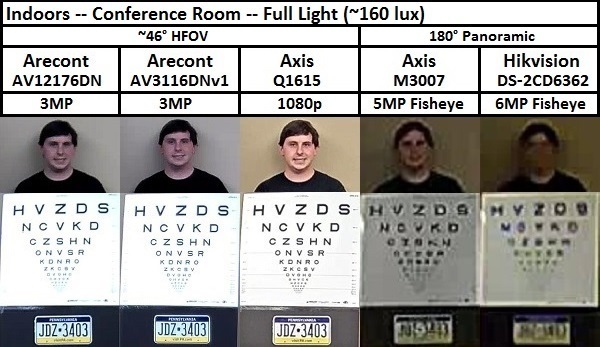 Around 1 lux, the AV12176 has moderately more noise than the AV3116DNv1 and much more than the Axis Q1615, though the chart is still legible to line 4. Again, the single imager fisheye cameras lag behind. 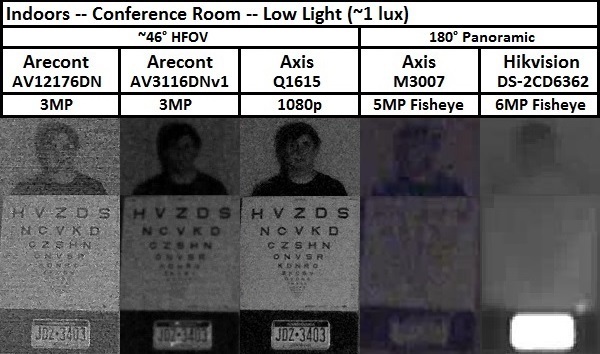 In a very dark scene, ~0.1 lux, the Omni is unable to produce any usable image. The AV3116, Q1615 and Hikvision 6362 provide marginal detection of the subject and chart, but no details. 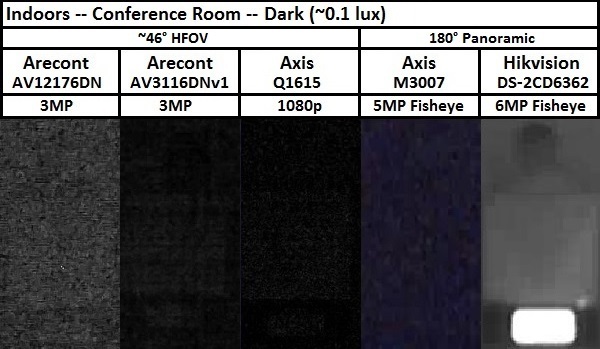 Arecont is one of few manufacturers who include binning in their cameras, which combines multiple pixels (4:1 in this case) to improve low light performance, but lowers resolution. Effects on performance vary depending on light level.

At about 1 lux, turning binning on brightens the image moderately, with our subject and chart slightly more visible. However, the decrease in resolution reduces details, with the chart less legible than in the non-binned image.

At ~0.1 lux, even with binning on the camera is still unable to produce a usable image. The subject and chart are just barely visible.

We tested WDR performance in this scene, against strong backlight through a raised overhead door: 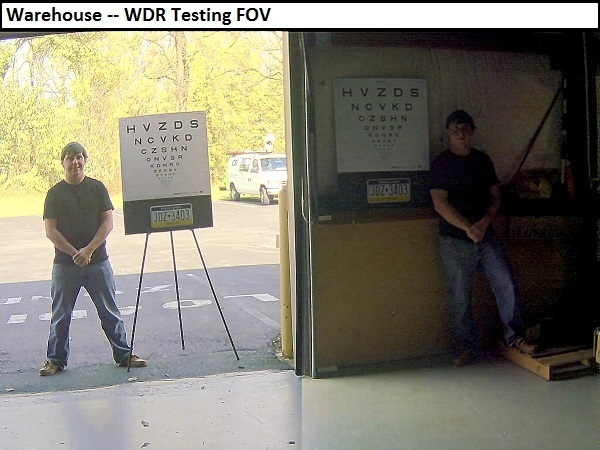 The AV12176DN performs well, with details of our subject and test chart, though is worse in the dark area next to the door, especially compared to the Axis Q1615. The Omni outperforms both fisheye panoramic cameras, even the true WDR DS-2CD6362. 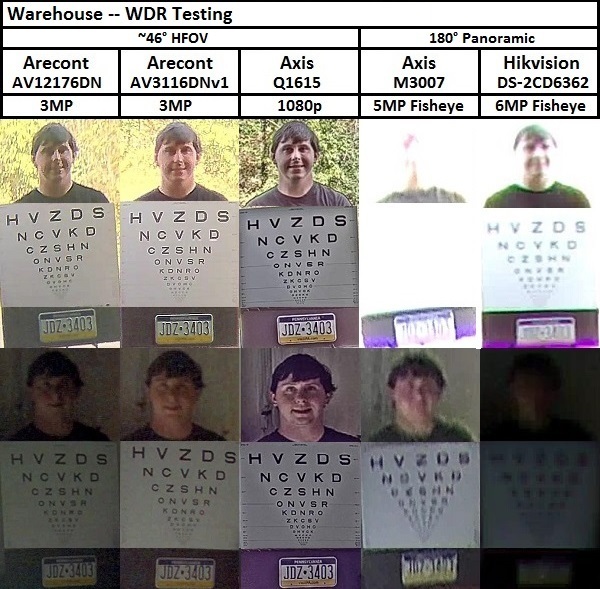 During testing we had three bugs which were intermittent, but common:

One or more imagers regularly failed to turn the IR cut filter on during test setup. This resulted in bizarre coloration, as seen in the image below. Rebooting the camera fixed this issue. 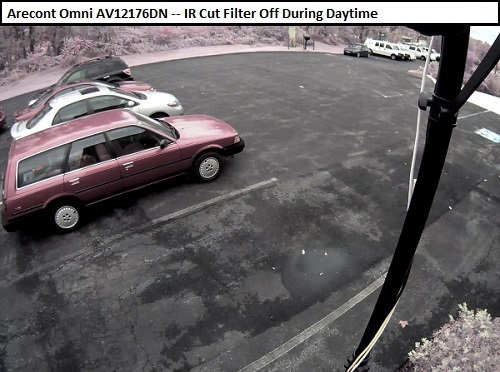 White balance of some imagers occasionally shifted far to one color or another. In the image below we can see the blue tint outdoors caused by this, only experienced in this imager in this scene. Rebooting sometimes fixed this issue, and it could be compensated for by adjusting color gain controls in the web interface. 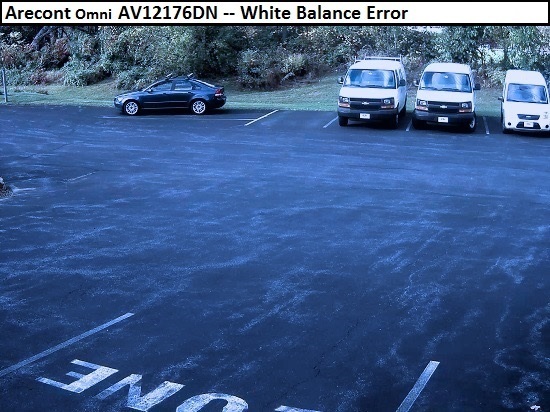 Generally speaking, framerate was a solid 5 FPS, without issues, day or night. However, when viewing the camera via the VMS as well as the web interface simultaneously, framerate often slowed to 1-3 FPS, and occasionally the stream dropped completely. Closing the web interface remedied this, with VMS streams and framerate consistent again.

The Omni AV12176DN had no material bandwidth issues. Bandwidth per sensor was moderately higher than the single sensor AV3116DNv1. Bitrate was lower than both fisheye panoramic models tested in full light, though higher than the IR equipped Hikvision 6362 in both low light levels.

Users should note that average bandwidth consumption for the camera as a whole is about 4x these measurements.