$200 for a 10MP camera? Too good to be true or the next big thing to stand out from the commoditizing HD market?

After years going sideways, ACTi is pushing hard with an ambitious, broad line of low cost products. Their recent release of the 10MP E97 minidome is perhaps the best example, drawing a lot of attention for its $200 price.

Non proprietary, H.264, 10MP cameras are pretty rare. Arecont has the widest offerings here. And, interestingly, Arecont likes to brag that camera decisions are all about getting the most pixels per dollar. Indeed, if that is the case, this new ACTi blows Arecont away.

Low cost and higher resolution are clearly two of the biggest needs in surveillance, so we bought an E97 and matched it up against the Arecont 10MP (which we tested here) as well as the Axis M30 1080p (tested here).

Our goal was to determine:

The E97 offers distinct advantages in wide, evenly lit fields of view, especially taking into account its much lower price than competitive 10MP options. However, at longer ranges, some clarity is lost, reducing its usefulness for identification. If low light is a key concern, users would be better off using 1080p resolution or lower, as only detection is possible, at most, using the E97. Additionally, be prepared for a sizeable increase in storage costs, given the ~8x greater bandwidth consumption.

Alternatively, ACTi is releasing other 10MP cameras in 2014 that include integrated IR and varifocal lenses, which may be a better option for those wanting a professional camera with higher resolution and better low light performance.

We found substantial focus issues with the E97 out of the box, despite claims that it ships pre-focused from the factory. Refocusing may be accomplished by unscrewing a locking ring and simply turning the M12 lens, though this easily adds ~10-15 minutes. The image below shows the improvement in performance between factory focus and refocusing for testing: 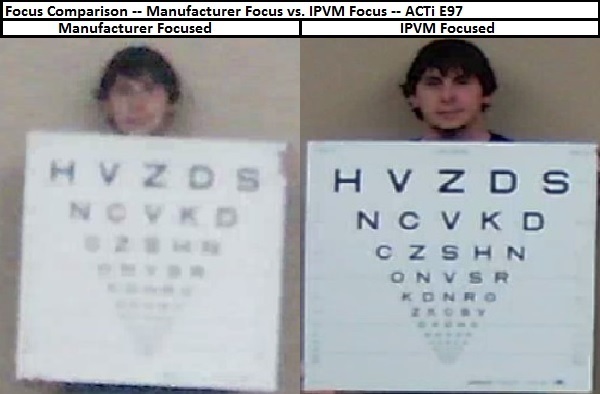 We recommend to immediately check / refocus during initial setup rather than taking a risk that the camera was shipped out of focus.

In this video we review the physical form factor of the camera and key features:

This video reviews the web interface of the E97:

Below are video clips of the ACTi E97 in use in both full light and dark scenes at the camera's max 6 Frames Per Second.

We shot the 10MP ACTi E97 in our conference room and office scenes in both full and low light environments. We tested the E97 against multiple cameras:

This image shows the FOV used in this test: 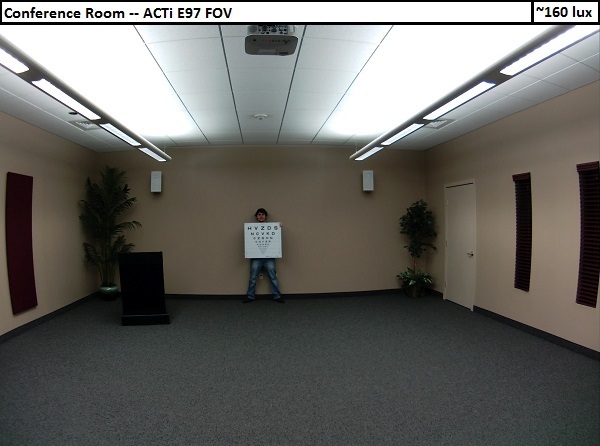 We placed our subject about ~25' from the cameras in order to test differences in image quality. At this light and PPF level, the ACTi E97 performs well, with more lines legible than the Arecont AV10115 (down to line 6 vs. line 5), and clearer details of our subject.

In low light, the E97 can just barely see our test chart and subject, while the Arecont 10MP provides no usable image. The low light optimized Samsung SNB-5004 easily outperforms all the other cameras in the test.

We moved our test setup to a larger area, giving us a 100' horizontal FOV in order to see differences in performance at longer range.

This image shows the FOV used in this scene: 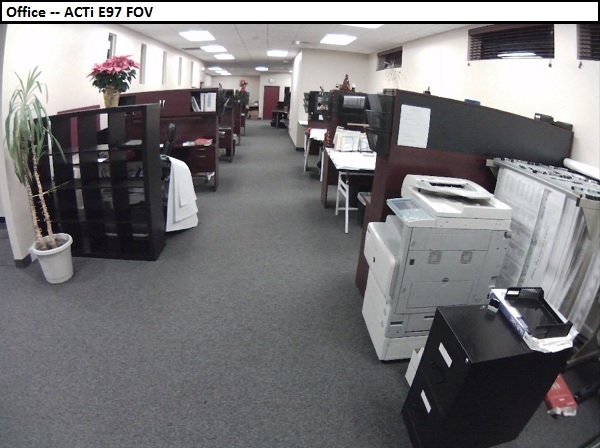 With our subject at this distance, the E97's performance lags behind the AV10115, with only the first line of the chart fully legible, though subject details are roughly the same. The M3005 is easily outperformed by the E97 at this range.

In our tests, no matter which streaming method we chose (CBR or VBR), bandwidth stayed steady, and quantization increased in low light (from ~30 to ~41 using "high" quality). Based on this, it seems that the E97's VBR implementation is broken, and CBR is used no matter what is selected.

Using all cameras' maximum framerates, the The E97's bandwidth usage was lower than both the Arecont AV10115 and Axis M3005 in full light, though it had the highest consumption in low light. However, standardizing all cameras at 6 FPS (the E97's maximum), consumption of the M3005 drops significantly to about .5 Mb/s, the lowest bandwidth in the test.

Users should note this huge increase in bandwidth at similar framerates when weighing tradeoffs of 10MP, as this will result in much higher storage needs, as well. 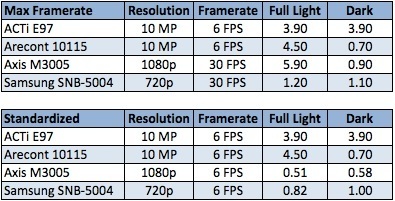 All cameras were tested using default settings, except for exposure, which was standardized at 1/30s. The following firmware versions were used in this test: