Even today, there are remote locations, especially in security applications, where extremely limited bandwidth is available.

Despite that, users want to be able to monitor video live.

In a world where HD video is the norm, what can you do when you only have 56 Kb/s or less?

A handful of vendors claim 'magic' compression technologies for these applications but they are typically proprietary and expensive.

Users constrained to a 56K dialup connection (constrained to 48 Kb/s upload max) may be able to stream live video using standard cameras and CODECs, at the cost of resolution and frame rate. Resolutions of CIF, QVGA, or lower and framerates of 10 and below should be used to stream video via such a low bandwidth connection. Additionally, since motion increased bitrate by as much as 100% in our tests, headroom should be allowed to account for this or streams may drop.

Using an Axis P3354, we measured bandwidth between 720p and QVGAresolutions using 10, 5, and 3 frames per second, and compression levels of Q28 and Q32. We set the camera up to view a blank wall, with our subject walking through the scene. The field of view for testing is represented below: 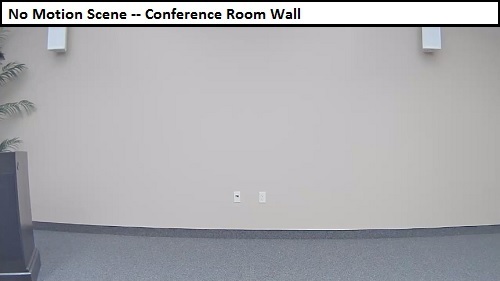 With our subject standing in the field of view, we cannot see clear details from our subject in the QVGA image, but we can get a general idea of clothing and features. The QVGA bit rate in this scene with low motion was only ~11% of 720p. 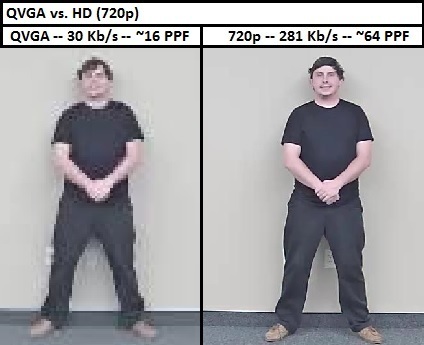 56k dialup connections are limited to 48 Kb/s (using V.92 modems). The highest quality frame rate/compression combination in our tests that did not exceed this bandwidth was 5 FPS at Q28, averaging about 38 Kb/s. Below is the video of our subject moving through the scene.

The lowest configuration with a bit rate of 19 Kb/s was obtained using QVGA resolution, H.264, high compression at 3 FPS.

As a middle-ground between the highest and lowest bit rates achieved, we measured 32 Kb/s, which had the camera set to QVGA resolution, H.264, high compression at 10 FPS.

Here are the compiled bandwidth measurements taken from testing. Notice how every QVGA resolution test passed, while none of the 720p tests did. We can clearly see a ~9X difference between 720p resolution and QVGA as well throughout many of the different scenes tested. 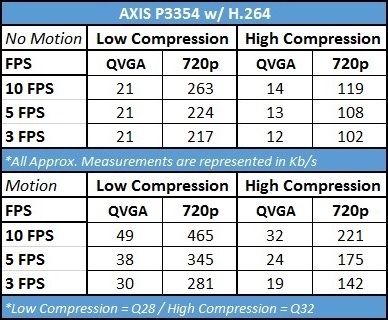