How good are surveillance cameras in low light? With the advances in integrated IR, image processing and larger imagers over the past few years, we wanted to find out.

We tested 12 cameras in two key scenes, a dark field, below 0.1 lux, and a parking lot with outside lighting, 1-2 lux, seen below: 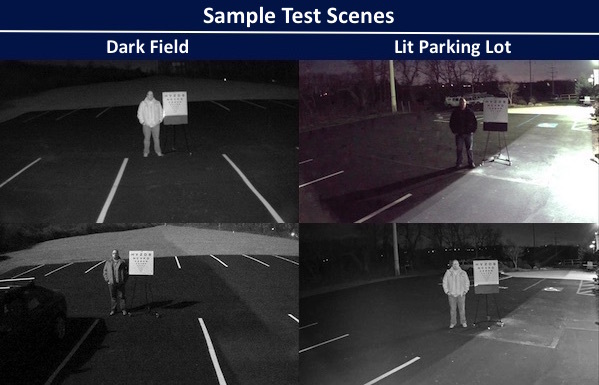 We used a total of twelve cameras in this test, representing a range of cost, quality, and featuresets.

For example, the image below shows a 1080p integrated IR models versus large imager 1/2" and typical 1/3" super low light models. The 1/2" model performs similarly to the integrated IR model, while the 1/3" is only modestly worse. 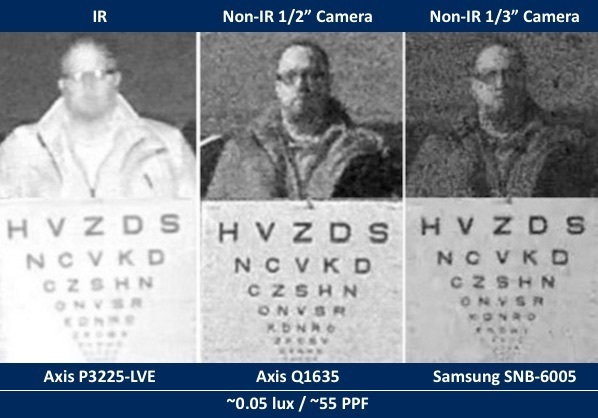 In past tests, integrated IR was much better than non-IR low light models, as this example from our 2013 test shows. The non-IR model produced nearly no image, while the IR camera provided strong details of the subject.

We review these findings in the video below:

In brighter scenes, such as the lit parking lot (ranging from 1-2 lux), super low light models produce image details similar to integrated IR, though with the added advantage of color images. For example, in the 1/3" and 1/2" low light models below, the subject's black jacket and blue jeans can clearly be seen, where both simply appear grey/white in the IR model. The green stripe of the van behind can also easily be seen.

We review footage from these cameras in the video below:

At long ranges, large imager super low light models provide moderate advantages over IR cameras, with better detection in our tests due to increased contrast between moving objects and the background, especially when forced into color mode, seen below. This example shows the Avigilon H3 9-22mm bullet versus the 1/2" Hikvision Darkfighter 6026, with the subject easily visible in the color image, but blending into the background in the IR model:

In this video, we review these findings in more detail: 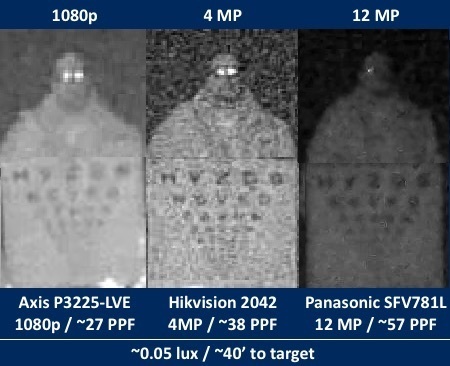 Low cost IR bullets, such as the Hikvision 2042 in this test, provided image quality similar or better than much more expensive integrated IR and super lower light models at close range. 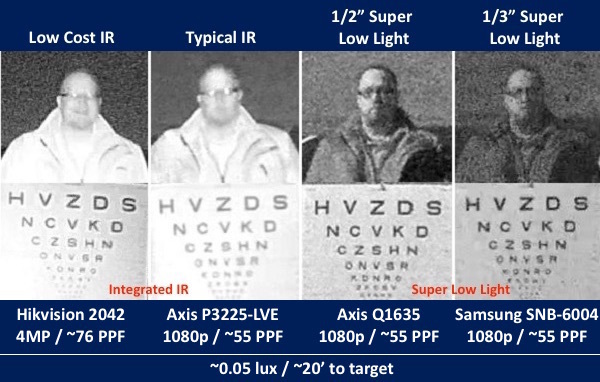 However, at longer ranges, beyond these cameras' limited IR range, other models provide better detection of the subject, who can barely be seen in the 2042 below: 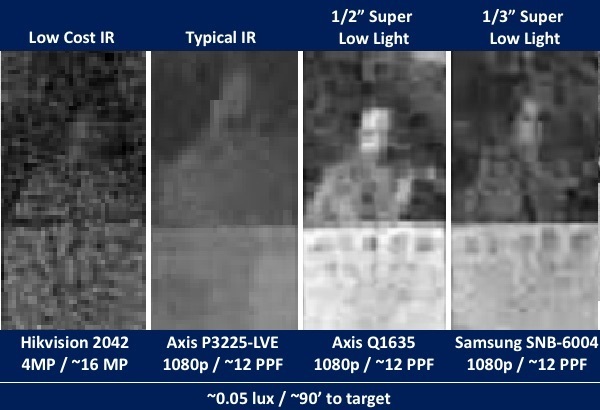 As a baseline comparison, the image below shows "average", non-super low light model compared to others. Images are notably dimmer, with less contrast than the 1/3" and 1/2" low light models and both integrated IR cameras. 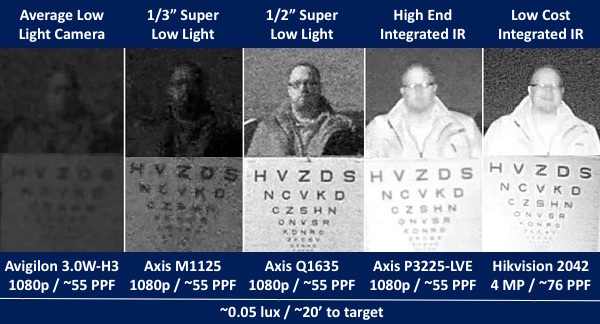 Cameras were tested using default settings with the following modifications:

IR cameras were tested one at a time to prevent interference between models.

Hikvision 4K Camera Tested on Sep 09, 2016
Hikvision is the most common choice for low price entry level products but...
21 Scenes Lux Readings For Video Surveillance on Aug 11, 2016
IPVM went to numerous locations and measured the lux readings / light levels...
Integrated IR Camera Usage Dominates - 2016 Statistics on Aug 03, 2016
In 2014, IPVM statistics showed integrated IR camera use was surging. Now,...
Camera Innovation is Amazing on May 04, 2016
The innovation in the video surveillance camera market has never been higher...
Axis P3225-LVE Camera Tested on Apr 18, 2016
Though Axis is embattled at the low end of the market, the mid to high end...

Just 5 years ago, people routinely warned about using megapixel in low light. And there was certainly a lot of truth in that as many cameras performed extremely poorly.

And now, there are megapixel cameras, without IR, in very dark scenes, producing images that rival IR. It's amazing progress.

If this continues, what does this mean for integrated IR and for thermal? Does integrated IR become more of a cheap low light option where super low light cameras are the high end, even for very dark conditions? Does thermal get relegated for very niche applications, even further than today?

We have had really good results with the Bosch Starlight series of cams. They come in PTZ, dome and box configurations. In Florida we have to deal with the sea turtle nesting season. All lighting along the coast must be minimized to the point our beach surveillance was compromised or non existent during the nesting season. We replaced the beach cams with Bosch 7000 series Starlight and the difference is night and day no pun intended. We were so happy with the Starlight cams we installed them at remote well sites with equally good results. You guys mightn't try testing the Starlight cams also.

They are certainly good but the market keeps on advancing and there has been many strong new offerings from rivals in the past year.

I missed those tests. Thanks John.

Is there any particular reason IPVM chose to test discontinued H3 cameras? http://avigilon.com/news/security/discontinuation-of-the-avigilon-h3-portfolio-of-cameras/

Given the H4 HDs were just recently announced, we plan to test them in the near future. This test was actually already in the works before the H3 discontinuation and we're still waiting for our H4s to arrive. 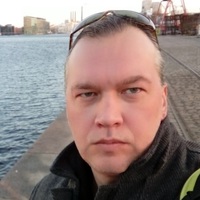 Good job, IPVM. So next expected step for manufacturers can be super low light cameras with integrated advanced IR, which can outperform thermal cameras on detection range, resolution and price?

They are already clobbering them on resolution and price. As for detection, although super low-light and advanced integrated IR cameras will have improved detection range, it's fundementally different than the way thermal detects, and I'm not sure they are directly comparable.

Since thermal is working off a heat differential, it can detect people hiding in the grass, or hiding in a car etc. Of course at low resolution.

Hybrid thermal/visible cameras on the other hand may benefit by having the ability to illuminate in the visible that which is detected in the infrared, with enhanced resolution.

As super low light already outperforms thermal cameras on resolution and price, two of your criteria are already true (and has been true since thermal cameras were introduced).

As for detection range, as long as we're talking perimeter protection, I am certain that thermal cameras will continue to reign in this area (with the exception of a select few scenarios) for the foreseeable future. Although thermal cameras are not immune to poor conditions (fog/rain/snow/pollution) they are much more resilient to such conditions and will provide much more consistent results for perimeter protection.

The false alarm rate is also lower overall for thermal cameras, something that has to be considered.

The gap between regular cameras and thermal cameras will however certainly be smaller, and keep shrinking, making it more cost efficient to use regular cameras for simple/low-risk scenarios.

Good points. In an upcoming thermal vs super low light shootout, we plan to test both video quality / ability to capture details as well as video analytics performance. It will be interesting to see how close (or not) super low light cameras do given their noise and the risk of stray lighting impact their performance.

In my opinion you guys should be testing with Avigilon H4 bullet cameras as they have light catcher and adaptive IR technology. The H3 is older and being phased out

Avigilon H4 test report is being released on Monday.

Our Avigilon H4 test is published. We tested two cameras, the 4K (to see the state of 4K integrated IR models) and 5MP (which Avigilon specs as their most light sensitive model). Neither really moves the needle per se, or has huge impact on the results of this test, and general findings remain the same.

However, the 5MP Avigilon H4 (left) is clearly more light sensitive than the H3 3MP (right). This is most noticeable in non-IR scenes at night seen here. 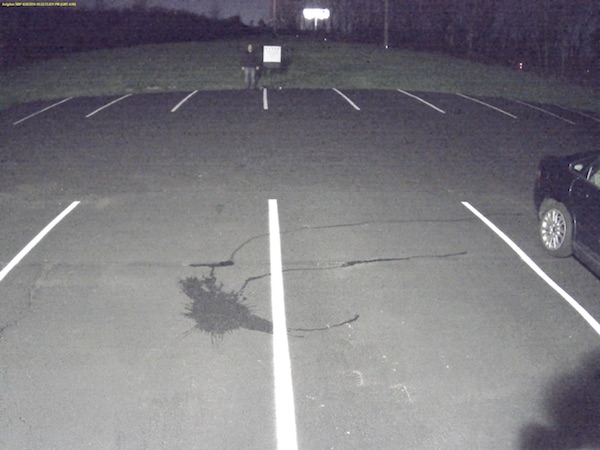 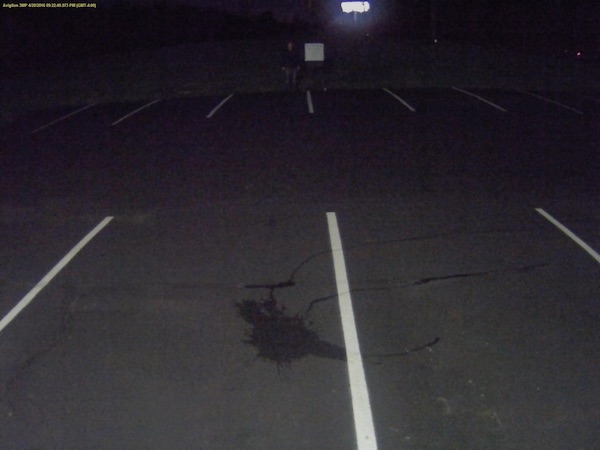 The 4K Avigilon H4 is slightly/moderately better in some scenes than other 4K models, but ultimately, as we say above, 4K's benefits in low light are few, if any, versus 1080p/3MP.

FYI, street prices on the H3 cameras went way down