A smaller F-number can make a big difference in how much light reaches an imager.

For example, the difference even between a f/1.2 and f/1.0, which may seem very close, can be significant, as shown by our F-Stop Calculator:

However, almost all megapixel cameras use lenses of at least f/1.2, with many at f/1.4 and even some lower cost ones at f/1.8 or higher.

We recently bought a F/0.95 6MP rated lens from Hikvision (the HV0733D-6MP). This lens is huge, shown below in the middle surrounded by 'normal' size megapixel surveillance lenses:

The HV0733D-6MP has a street price around $300. This is significantly more expensive than typical 1-3 megapixel rated lenses, typically in the range of $100.

If absolute best low light performance is required and budget is no issue, the F/0.95 may provide moderate improvement of images at light levels below 1 lux, especially in cameras 1080p and up.

Users should be careful when selecting enclosures for box cameras using this lens, as its increased size compared to standard lenses may require a longer housing.

The Hikvision F/0.95 lens is much larger than typical megapixel rated lenses, nearly double in both diameter and length. This size may be a practical issue with some camera housings, as the lens and attached box camera may simply not fit in smaller enclosures. Additionally, if used indoors, aesthetics may be a concern. 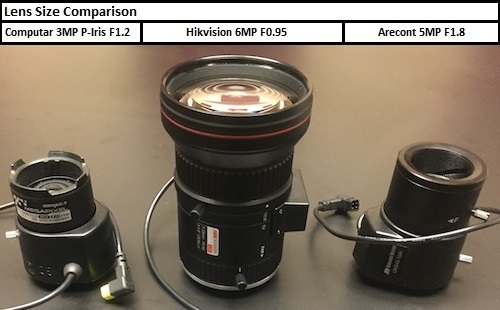 We tested the F/0.95 Hikvision lens on three cameras at low light levels ranging from 0.04 to 0.6 lux to show differences between stock lenses and the low light model. We tested a range of cameras, from 720p to 5MP resolution in the approximate FOV seen below: 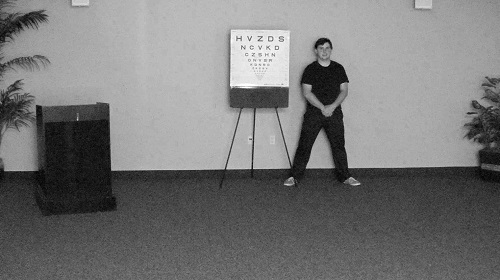 First, we tested the HV0733D-6MP with a 5MP Arecont Vision AV5115DNAIv1, a notoriously poor low light performer, with a high F/1.8 f-stop lens (the UHD45-10). Using our F Stop calculator, we can see the Hikvision lens allows 2.5x more light than the Arecont model.

At ~0.67 lux, the difference between the two lenses is clear, with the camera producing an image using the F/0.95 lens, while no usable images are produced using the Arecont recommended UHD45-10 lens (F/1.8). At ~0.35 lux, differences are less clear, with the camera able to detect the chart using the F/0.95 lens, but no details are provided. At ~0.04 lux, light levels are too low to produce a usable image with either lens.

In the Axis Q1615, the difference in noise level at ~0.67 and ~0.35 lux is clear, with better details of both subject and chart provided when using the F/0.95 lens. At very low light levels, the F/0.95 lens still provides better chart legibility, but the scene is too dark and noise levels too high to produce details of the subject.

In the Samsung SNB-5004, effects are less pronounced due to the closer F numbers of the lenses, as well as the camera's excellent low light performance. The main difference here at all light levels is reduced digital noise. At ~0.35 lux and ~0.66, subject details are much easier to discern using the F/0.95 lens