Office cameras keep getting stolen? What do you do?

We spoke with a British Columbia business owner, who has replaced one of his cameras four times in the last three weeks, about why he keeps doing things exactly the same way after becoming the target of thieves.

The first time the camera watching the back door of CRVTEK IT Consulting Co. was stolen was about three weeks ago.

“Someone came and took the camera down, and that’s it,” the business owner said. The person struck again a few days later. Then two more times the last two weeks. After reviewing his footage, he found that two people were coming by at night and stealing the cameras.

For the first three incidents there was no evidence they ever tried to get inside the business. None of the locks had been tampered with. No windows were broken, and the alarm system was never tripped. After the most recent theft, there was a mark on the back door that police suspect is from a pry bar.

“I have a few computers here, but what it looks like they’re more interested in is my server room and the information in my file cabinets,” he said. These things have since been bolted to the floor.

The business owner, who requested we not use his name, is using a low cost SVAT kit he bought online. He has one camera watching the front door (which has not been tampered with or stolen) and one watching the back which he replaces with other cameras from the kit.

The camera watching the back door is secured to a piece of wood on the wall. The thief takes out the screws and disconnects the camera, and to the best of his knowledge, leaves.

He says the RCMP suggested he move the cameras inside, but he said the glare from the glass made images “terrible.”

“I’m not going to move them. If they want to steal it, they can have a $40 camera. Now I call them my sacrificial cameras,” he said.

Why He Doesn’t Change the Cameras or Positioning

“I can put a better camera, or I could put a camera somewhere higher, in the air or on a pole, but it’s more money --- a $500 camera just to get better images or features is getting too high,” he said. He said it would cost him more time and money to put a cage around the cameras than he paid for them.

One friend suggested he stop putting cameras up altogether so they don’t get stolen, “but that’s not a solution to me,” he said. “I want to catch the little buggers.”

Where he mounts the camera has been effective in providing evidence so far. He says he has clear footage of a person’s face covered with a bandana, another person that sometimes accompanies the thief and the motorcycles they use to come and go. Here is one of those photos: 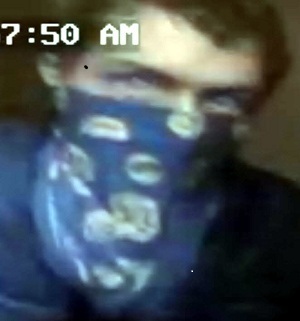 Two people in the town of 3,000 recognized the person in the images, he said. The police just have to find them.

“The camera did what it was supposed to do. So it’s only a matter of time,” he said.