Intrusion motion sensors have remained relatively static for years, but one startup wants to make them go IP and intelligent.

Zwobbx is raising money to deliver on a sensor that not only detects motion, but also flashlights, temperature swings, and smoke, but also triggers lights or even sprinkler systems to turn on. 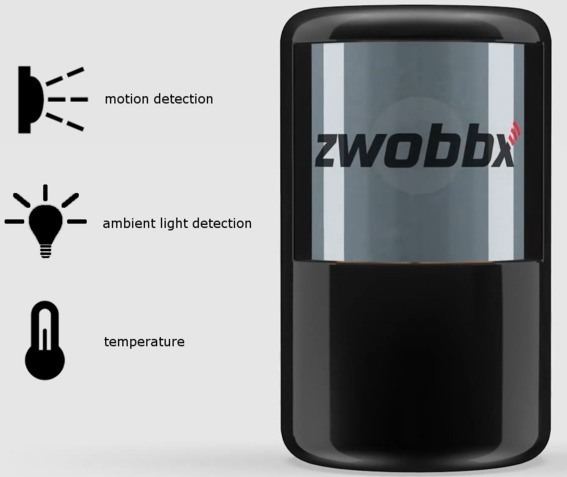 Will this startup succeed? Will they render existing motion sensors obsolete?  We look closer at the device in this note.

The key feature Zwobbx builds on is that it operates autonomously, with its own battery power supply, but communicates with other home automation systems via Zigbee or pushes notifications via wifi connected cloud servers.

Unlike traditional motion sensors, the device needs no panel to operate. As a result, it can be hung anywhere it has wifi access and still operate, including outdoors and remote locations.

Essentially the sensors form a coverage area the company coins a "protective shield" that continually monitors the environment against intrusion or sharp environmental changes that signal trouble. If detected, the sensor can communicate with other systems (home automation) to turn on lights or even watering systems, or dial out to alarm monitoring companies, law enforcement, or home owners via mobile app.

Despite the firm workflow claims, much of the final design of the sensor is still being decided, including:

Zwobbx's users will find the device is not a simple 'set it and forget it' type of sensor. In order to be useful, it needs to be properly configured for the environment (ie: given alarm setpoints) and integrated with other systems to be useful. Configuring Zwobbx is likely accomplished through the app, and the relative ease or difficulty of joining the unit with household systems is likely to be involved and require some technical aptitude to pull off.

At the current time, Zwobbx's team is focused on hardware development, and the software team is provisional with much to accomplish.

Another key factor: Zwobbx is relatively expensive at a pre-release price of ~$130 per sensor. Depending on the range of the sensor, anywhere from two to four sensors will be required to cover even a modest apartment or flat. While a total system cost of less than $500 is a steal compared to 'traditional' hard wired alarm systems, the same area could be covered for less total cost by another DIY system like Scout [link no longer available].

But... It Is Different

However, the idea of making the sensor smarter is compelling, and maybe a design trend to watch. Given the buzziness of 'the internet of things' concept coupled with advances in more powerful, cheaper processing at the edge, products like Zwobbx could signal the end of the traditional hard-wired, centrally monitored security system.

Dead Before It Lives?

The biggest alarm may be found in that the effort only has raised ~$1300 of it's $100k goal after ~20 days.  This warning sign can mean Zwobbx is a half-baked idea, the design is fraught with flaws, the team is ill-suited for development, or the device just is not marketable in a segment awash with friendlier, less-obtuse DIY offerings.

In any case, we cannot ignore the pitiful showing this campaign has raised. While we are bullish on the idea, the execution is another matter entirely, and it appears Zwobbx is not likely to succeed in current form.

The New Generation of Crowdfunded Security Startups on Sep 02, 2014
New entrants to the security market are few and far between. However, there...
Comments (5) : Subscribers only. Login. or Join.